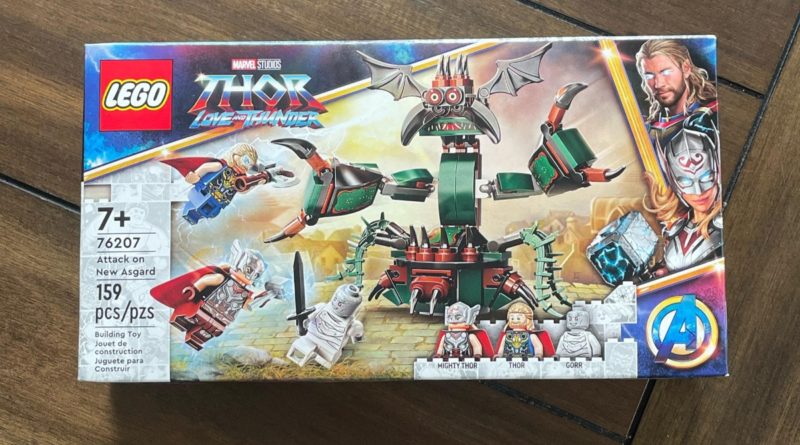 The official unveiling of a Thor: Love and Thunder LEGO set appears to be imminent, thanks to a new set in LEGO.com’s instructions database.

76207 Attack on New Asgard is one of two LEGO sets that tie in to Thor: Love and Thunder. The other set – 76208 The Goat Boat – was revealed some time ago, and depicts a fantastical Viking longship for Thor and his friends to ride.

The highly anticipated Marvel movie is the fourth to see Chris Hemsworth’s Thor in a starring role. He’s joined by a mix of old and new characters including Valkyrie, a super-powered Jane Foster and the malevolent Gorr the God-Killer.

The latter two can be found in 76207 Attack on New Asgard, alongside a large green creature of uncertain origin. However, we have some theories as to where it comes from.

While we do have a shot of the box art (thanks to an early purchase of the set) the finer details of it are still unknown. However, the set has now received an instructions listing on LEGO.com. As the recent reveal of the Muppets Collectible Minifigures makes clear, this suggests we’ll get a proper announcement for this set in the next few days.

Such a reveal will be welcome at this stage in the game. Although Thor: Love and Thunder is due to release on July 8 this year, it remains largely mysterious to us. No trailers have been released for the movie itself, and we’ve been left to pore over merchandise (including LEGO sets) for hints on the film’s content.

The two LEGO sets released for the film suggest New Asgard (an Earth colony for surviving Asgardians) will play a significant role in the film’s story. With luck, getting a closer look at this set will reveal some further hints of what’s to come. No price or release date has been established for 76207 Attack on New Asgard, but they should be announced when the set is.