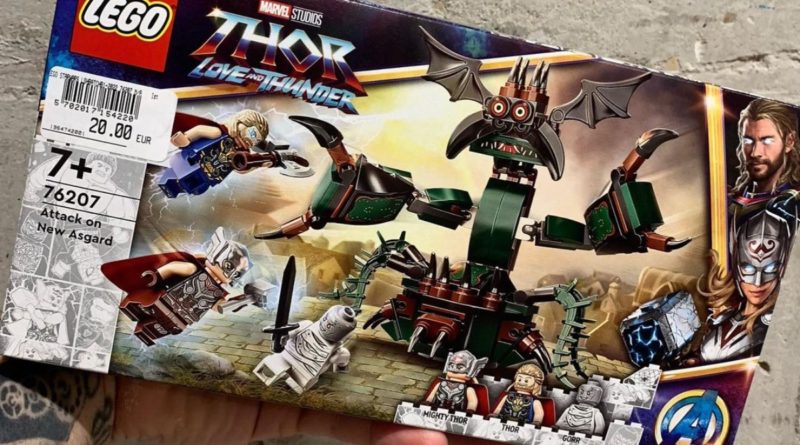 A second and previously-unannounced LEGO Marvel set based on Thor: Love and Thunder has turned up at an airport LEGO Store.

Joining the already-revealed 76208 The Goat Boat is 76207 Attack on New Asgard, a smaller set that repeats three of the minifigures from its larger counterpart. Those are Thor, Gorr and Mighty Thor, which (contrary to first assumptions) are not the members of Asgard’s newest boy band.

Instagram user the.brick.wolf apparently discovered the set on shelves at the LEGO Store in Istanbul Airport, where it was on sale for €20. That suggests it’ll cost £17.99 in the UK and $19.99 in the US whenever it surfaces in those markets, which – if 76208 The Goat Boat is anything to go by – will be April 26, 2022.

If that release date is accurate, it’s even more surprising that the Thor: Love and Thunder set has appeared in an official LEGO Store so early. And given it’s also designed to accompany the brilliantly-named 76208 The Goat Boat, that the LEGO Group chose not to reveal both sets in tandem is equally curious.

We’ll hopefully find out more about the release of 76207 Attack on New Asgard soon, including its international pricing and what exactly its weird, green character build is supposed to be. (Your guess is as good as ours at this stage.) Thor: Love and Thunder arrives in cinemas on July 8, while 76208 The Goat Boat launches April 26.

If you’re after a more immediate Norse god fix (and are worthy enough to wield it), 76209 Thor’s Hammer lands on shelves tomorrow, alongside dozens of new sets across a huge number of different themes.