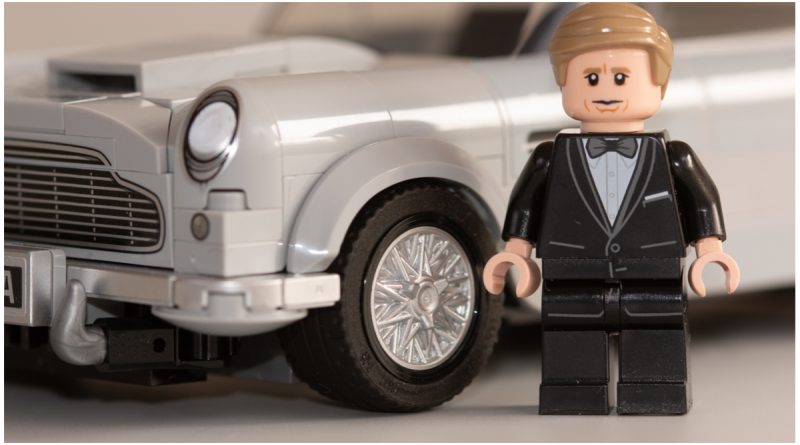 Neither shaken nor stirred, James Bond’s most iconic car gets the LEGO Speed Champions treatment in 76911 007 Aston Martin DB5.

Bigger, it’s fair to say, is usually better. But every now and again, something comes along to disprove the rule. A couple of years ago, LEGO designers came up with the Creator Expert set, 10262 James Bond Aston Martin DB5. With over 1,200 pieces, priced at £130 (or thereabouts) and sitting 48cm long, it should have been great. But somehow it looked a little off. A little square. A little… cross-eyed.

Fast forward to 2022 and the Speed Champions theme steps out of its comfort zone and takes some inspiration from the silver screen. And one of the first four-wheeled movie stars to be created at more-or-less minifigure scale is that same Silver Birch-coloured Aston Martin. So how does it stack up to its older, bigger sibling? Pretty well, actually.

LEGO Speed Champions 76911 007 Aston Martin DB5 is available from LEGO Stores, LEGO.com and a wide range of retailers. And the Q division of MI6. But good luck finding them, let alone getting them to give you a car.

Released as a tie-in with Daniel Craig’s final outing as the world’s longest lived spy, the box is adorned with not only the LEGO and Speed Champions signage, but the Aston Martin badge and the 007 logo. This is as official as official can be. Neither Aston Martin, nor Eon Productions were going to allow anything other than a fantastic representation of their car on to shelves, and the designer has clearly burned the midnight oil getting this set just so.

Where the Creator Expert set got it wrong, 76911 007 Aston Martin DB5 gets it oh so right. The scale, proportions, curves… you name it, it’s just great. Not perfect, as we’ll come to in a moment, but not far off. Squint, and this could be a die-cast replica rather than a LEGO set. As builds go, it’s not the most complex, but there are still some neat touches, such as the way the bumpers (which have been produced in silver, and look so much better for it) are fixed into place.

Stickers, usually the bane of the Speed Champions builder, are kept to a minimum with just 12 on the car, plus another eight for the four alternative sets of number plates. They don’t revolve but it’s pretty simple to switch them out. Fortunately, the budget also stretched to some printing for both front and rear lights – the focus for LEGO Speed Champions in 2022 – and that instantly recognisable grille. It’s printed across two pieces, but looking at it, you’d never know.

Printing, though, is also the only downside to this set. The side and rear windows are a single, large trans-clear element which is printed with grey to create the back of the car, broken up by a silver window surround. And unfortunately the colour matching with the rest of the grey bricks leaves rather a lot to be desired. Less Q division and more ‘B&Q trainee’. In some lights it just about passes muster, but most of the time it sticks out like a sore thumb.

The only other criticism that could conceivably be levelled at 76911 007 Aston Martin DB5 is that it has no gadgets, which is arguably this car’s defining characteristic. But at this scale it feels churlish to even mention it. It would be impossible to fit any moving parts into a model of this size, so let’s be grateful for the five sets of number plates and leave it there.

Those number plates, by the way, require a bunch of extra drum-lacquered silver 1×3 tiles, which – as Jangbricks rightly points out below – will hopefully make that shiny piece much easier to come by in bulk on the aftermarket.

Every Speed Champions car comes with a driver, usually a generic minifigure in a racing suit. Not this time though. Chris Stamp, Senior Designer on the Speed Champions team, has mentioned that he’d pushed for a Sean Connery minifigure, but with a movie tie-in to consider, there was only ever going to be one man standing next to this car. While the hair is a little bouffant for Daniel Craig’s usually severe buzz cut, the rest of the minifigure is accurate, from the careworn face to the stylish dinner jacket.

As befits the theme, Daniel comes with a large spanner, but that’s not the accessory that Bond is most associated with. The LEGO Group has a well-known policy of not putting realistic, contemporary weapons in sets. Space blasters, axes, lightsabers and Batarangs are all fair game, but a Walther PPK? No.

However, the LEGO Group does produce an element, 4537551, known to the spares department as Nozzle w/03.18 Shaft, which looks a lot like a gun. It’s not, obviously, as in this set it’s used as part of the exhaust assembly. But because it’s one of those small pieces that might go missing, thoughtfully a second, spare one has been included. We’re not suggesting for one minute that you use this second one as a firearm for Bond, not at all. But, y’know… you could.

It’s not a phrase that gets used in reference to LEGO much these days, but at less than £20, this set is something of a bargain. 76911 007 Aston Martin DB5 is a great set that will appeal to LEGO fans, Bond fans and car fans alike. It’s not quite impulse purchase price, but it’s not far off.

Whether they are LEGO fans or not, there will be many, many James Bond fans who wake up to find this set under the tree at Christmas. It’s a terrific replica of an iconic car. Speed Champions fans will want this for their collection and rightly so. In a range that is going from strength to strength, this (slightly dodgy colour-matching aside) is one of the finest examples of the breed. Add in the only official James Bond minifigure (so far) and this set is going to fly off the shelves like Little Nellie. Now there’s an idea…

Support the work that Brick Fanatics does by racing over to LEGO.com using our affiliate links. Thanks.

Most Speed Champions sets are fun, interesting builds that punch above their weight when it comes to value for money. The DB5 stands in a class of its own compared to the rest of the range though, nearly all of which are – not surprisingly – racing cars, supercars and drag strip specials. As another model taken from a film franchise, 76912 Fast & Furious 1970 Dodge Charger R/T might appeal to the movie fan, but other than that, Speed Champions sets are pure petrolhead territory.

76911 007 Aston Martin DB5 is a straightforward build with relatively few stickers, so expect to be sipping a vodka martini less than an hour after you open the box.

There are 298 pieces in 76911 007 Aston Martin DB5, nearly all of which are grey. There are two numbered bags, 12 stickers and eight spare number plates.