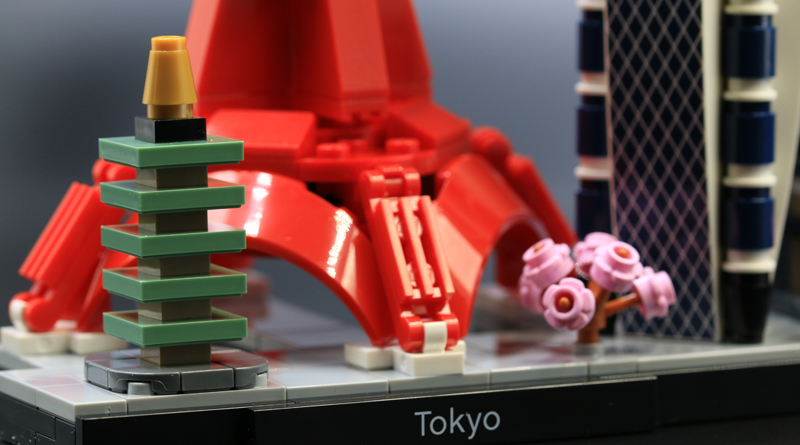 Tokyo has been referred to as ‘an origami city’, but LEGO Architecture 21051 Tokyo requires no folding, just building.

Ever since Tokyo became the capital of Japan in 1868, it has been a metropolis where modern technological advancement meets ancient cultural practices. Perhaps no other city in the world combines old and new in such a way, with shinto shrines found in skyscrapers and rock gardens on top of flats. So how does LEGO Architecture 21051 Tokyo manage to combine these two very different aesthetics?

For any fan who has built 21044 Paris (review), then making the base of this model will feel very familiar. To incorporate the Tokyo Tower, the base extends further back than most Skyline models. Some new 1×1 tiles printed with stripes to create pedestrian crossings have also been included in the base and these useful pieces may just appear in future cityscapes.

The similarities to 21044 Paris do not stop there, as Tokyo Tower is built using almost exactly the same techniques as the Eiffel Tower. For the supporting struts, grille tiles cover hinged plates and new red windscreen pieces recreate the curved arches, just like the Eiffel Tower. The unusual centre then uses 1x2x3 sloped roof bricks which are cleverly inverted, and a column of grille tiles is attached on top via a Technic rod. The other tower of 21051, the Tokyo Skytree, is actually one of the simplest aspects to build, ingeniously using eight flexible Technic rods that are slipped underneath the hollow cone of the spire to beautifully recreate the sloping sides of the skyscraper.

A much smaller part of the model that adds a splash of colour are the cherry blossom trees which use stem pieces and pink LEGO flowers very effectively, with the scale of the buildings giving the trees context. Next to the blossoms is a small part of Chidorigafuchi Park moat, recreated with 1×2 trans-blue tiles, which gets its name from being shaped like a plover-bird called chidori in Japanese.

Nature has been incorporated into all of the Skylines so far, usually tiny trees or flowing water, but 21051 is the first to include an iconic part of the natural landscape – Mount Fuji. It simply uses stacked bricks in sand blue, yet the result truly looks like a mountain on the horizon.

Shibuya Crossing is one of the most iconic locations in Tokyo, featured in numerous films and documentaries. With its colourful buildings packed tightly together, the buzzing intersection is instantly recognisable. Several types of printed tiles imitate the glowing neon signs of the buildings, but these transparent elements are quite tricky to apply as the colours look extremely similar in the instructions, so it’s easy to make a mistake.

However, out of all the buildings it is the Mode Gakuen Cocoon Tower that is the most challenging and therefore interesting to build. Its unusual shape is meant to represent nurturing the college students inside, and 2×8 bowed tiles manage to imitate this quite well. Hidden inside is a Technic frame made from cross-axles – these need to be exactly aligned for the building to attach to the base in the correct position, which is a bit of a nightmare to achieve, requiring dismantling of the entire skyscraper until the alignment is perfect.

Much like the real city, 21051 Tokyo manages to pack an awful lot into a relatively small space and although there’s a diverse mix of colours and building styles, nothing clashes. Each year the Skyline theme pushes the boundaries and 21051 Tokyo, as the first of 2020, may just be one of the best yet.

21051 Tokyo is available now at LEGO.com. You can help support Brick Fanatics’ work by using our affiliate links.