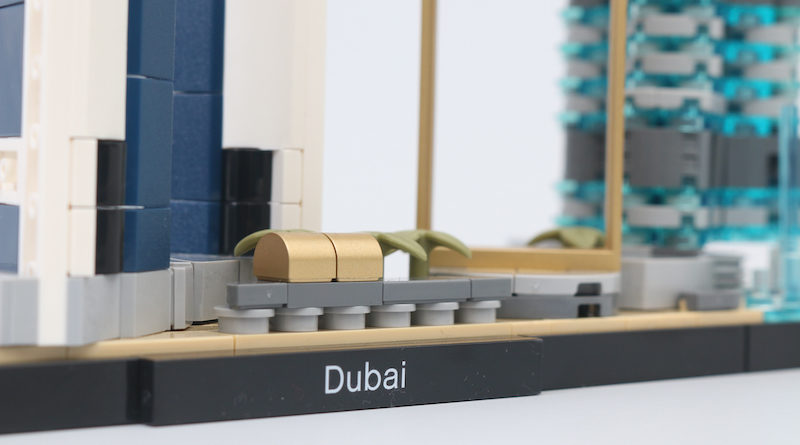 21052 Dubai is just like the other skyline sets to have come out of LEGO Architecture – truly impressive in design, detail and display.

Embracing the immersive depth of building that the theme has become known for, whilst also offering a variety of buildings and landmarks that the cities featured are famous for, the skyline series of builds within LEGO Architecture has forged a quite unique path. At once encapsulating the far more detailed build experience of the larger single landmarks within LEGO Architecture, the skyline sets offer a more diverse and budget-friendly entry-point into what continues to be a fascinating LEGO theme.

The most recent skylines are January’s 21051 Tokyo and 21052 Dubai, the 11th and 12th Architecture skylines released already, since the first ones appeared back in 2016 (curiously early releases 21028 New York City and 21034 London are still available). A quick glance through the four years shows how even over a relatively short period of time the skylines have evolved into even more comprehensive and complex creations that capture even more of the detail and identity of each city. 21051 Tokyo is reflective of where 2020 standards sit, and 21052 Dubai is equally as impressive.

LEGO Architecture couldn’t go wrong picking Dubai for one of its skyline sets, given how spoiled for choice the design team will have been for what landmarks to include – Dubai is a city that for decades wanted to be known for its unique and record-breaking buildings, and in many ways has successfully achieved that.

Importantly in choosing which buildings to include, the LEGO Group has come up with a selection that not only offers variety in construction and appearance, but that also offers a walkthrough of Dubai’s recent architectural history, with each structure marking different moments and firsts in world-wide architecture.

These two twin-style buildings were highly anticipated in Dubai when construction began in 1996. Upon completion in 2000, the Emirates Tower Office building (the taller of the two towers) ranked the 22nd tallest in the world, and was the highest in Dubai until it was overtaken by the Almas Tower, another office building, in 2008.

The smaller of the two buildings is known as the Jumeirah Emirates Towers Hotel. Both buildings in real life are connected with a retail park in between them, which in the set is represented with the ground level grey bricks on their side.

The LEGO set encompasses all that is iconic about these two buildings. The angles of the building, their unique prism shape and their asymmetrical placement to each other are all importantly and effectively recreated in brick form. Their inclusion within 21052 is also relevant for how, alongside the Burj Al Arab (at the other end of the skyline), they mark the starting point of Dubai’s era of great architecture. The twin buildings sit as one of the first large-scale, eye-catching designs to appear on the famous Sheik Zayed Road, which has since become littered with similarly unique creations.

The Dubai Frame is the most recently erected landmark featured in this set having been completed in 2018, at a cost of 230 million AED (£48 million). According to its Wikipedia entry ‘it is alleged that the Frame’s designer had his intellectual property stolen and was denied credit for the design’.

The Dubai Frame came about as a result of an architecture competition, with designer Fernando Donis’s original intent to – rather than add to the mass of buildings that exist in Dubai – instead provide a frame to showcase the many creations already on display. Whilst the practicality of that effect is lost within the LEGO set, the same simplicity of the idea is cleverly captured thanks to the use of a LEGO doorframe. This is the first time that the doorframe has appeared in that colour.

The Burj Khalifa is the most iconic building in Dubai, not only for being the tallest in the city (and world) at a towering 829.8m, but also for its status as one of, if not the grandest buildings in the world. This is one of Dubai’s greatest feats, has caught the attention of the world and has set the UAE city as a front-runner in the world for innovative and grand scale design.

It went up in 2009 as Burj Dubai before being renamed Burj Khalifa in 2010, in honour of Sheik Khalifa bin Zayed al-Nahayan, head of Abu Dhabi and the UAE. That came after the capital city rescued Dubai from unspecified debt incurred during the £1.15bn construction project.

The Burj Khalifa in 21052 Dubai is already the second version of the building in brick form, following 2016’s 21031 Burj Khalifa that reappeared in 2019 as 21055 Burj Khalifa, and interestingly takes a completely different tact to recreating the skyscraper. Constructed primarily out of grey and trans light blue plates, the skyline version focuses on the window and light effect of the building, as opposed to the larger set’s flatter, less particular approach to the exterior that instead prioritises the building’s overall shape.

The skyline version works well to differentiate the levels and floors of the skyscraper, making it look less like the solid concrete-esque structure that its bigger LEGO brother resembles, and even where it has to compromise in design it still does well to capture many aspects and shapes of the source material structure.

Skyline sets are where scale is certainly played around with the most in LEGO Architecture, and such differences between the various buildings in 21052 are perhaps most felt with the Burj Khalifa. If all the buildings were built side-by-side to a single scale, it would tower over the others even more so than it does in the LEGO model.

The Burj Al Arab was one of the earliest iconic buildings of Dubai, starting construction in 1994. Years before the Palm Jumeirah, the World Islands and various other projects that have since followed or are in the works, the Burj Al Arab hotel was notable for having been built on a man-made island, set 280 metres offshore.

The island, which has its own private beach, includes an access bridge that guests and tourists can enter from, captured in LEGO form in 21052 with a simple 2×1 tile running over a base of trans light blue tiles to represent the surrounding water. It’s a design detail reflective of Architecture’s increasing fondness as a theme to change what is otherwise a simple display base into an integrated part of the overall model.

When the hotel opened in December 1999, a British journalist who visited is said to have deemed it as ‘the world’s first seven-star hotel’, which it then became known for, even as the management team at the Burj Al Arab today assert to have ‘never said or used this claim themselves’ and happily refer to the hotel as a five-star.

A 2×2 rounded tile is a simple representation of the landmark’s helipad that sits above the building’s 59th floor and that in real life has hosted promotional events for Formula 1, boxing, tennis, golf and more. Meanwhile, white soft axle hoses help to shape the sail-like contours of the building’s outer framework effectively, whilst white bar holders with clip, and candle pieces help to create further details to the exterior structure, albeit with slight difficulty for the complex shape of the overall building. It’s not too jarring an effect, for what is otherwise the most notable compromise felt in building at this scale.

In real life, the Burj Al Arab is architecturally paired with the Jumeirah Beach Hotel, which sits just on the adjacent shoreline. Opened two years prior in 1997, the smaller wave-shaped hotel complements the sail-shape design of the Burj Al Arab and, given their relationship, if there was room for a fifth building on the skyline, it could easily have gone to this (admittedly adding a few studs extra in base length and pounds in price, so, wishful thinking…).

The set also makes allowances to two smaller locations of note within the city, namely the Dubai Fountain, which is linked to Dubai Mall and is based at the bottom of the Burj Khalifa, and the Dubai Metro station, one of the seven stations around the city.

LEGO Architecture sets rarely have cause to include LEGO minifigures, and 21052 Dubai is no exception.

Coming in at £54.99, as per 21051 Tokyo and £10 more (and 100-200 pieces more) than 2019’s 21044 Paris and 21043 San Francisco, 21052 Dubai offers the same overall value and depth to fans of architecture. It’s a model that smartly and accurately captures its source material in LEGO form, faithfully and interestingly so to recreate an interesting quartet of Dubai’s most famous landmarks.

Importantly, for the thin nature of some of the architecture included, the set also looks far greater on display than photography can suggest. There’s little to fault in the design of 21052 Dubai, such has been the consideration and care that has gone into its creation, and for a set that has to deliver primarily on build experience and display, that’s all you can ask.

21052 Dubai is a fine addition to the LEGO Architecture skyline series.  A city packed with the newest, most eye-catching and interesting creations in world architecture is a natural place of interest for fans of building design, and a most apt location for LEGO Architecture to visit in the skyline format.

Great design is complemented by great model selection too. Any number of buildings from the city could have made the cut to be included in 21052, but the four that are feel most relevant, for the variety in design and innovation that they offer and for the particular moments they mark in Dubai’s rapid development over the past two decades.

As a city fascinated with pushing the boundaries of architectural design, Dubai translates perfectly into LEGO form, particularly when put through the increasingly innovative design approach from LEGO Architecture. There’s perhaps never been a more apposite pairing of source material and LEGO theme before than that captured in 21052 Dubai.