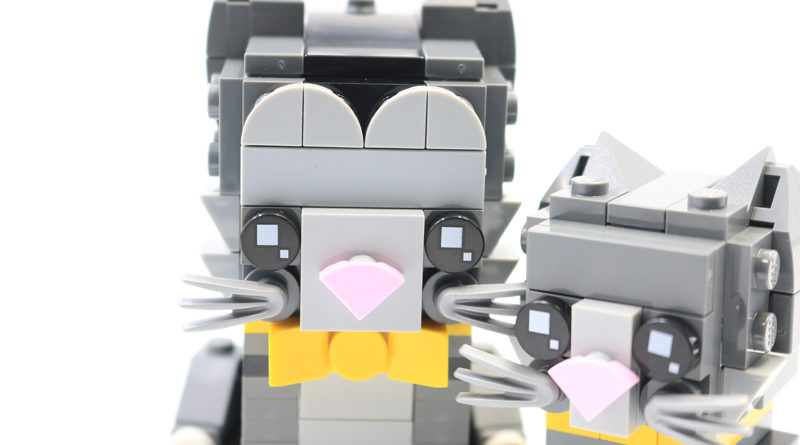 The LEGO BrickHeadz theme has turned its attentions to the domestic animal kingdom in 2021, with 40441 Shorthair Cats bringing a pair of popular pets into the fold.

Let’s face it: there had to be a cat in the introductory wave of LEGO BrickHeadz Pets. Over 10 million felines are owned in the UK, whilst in the USA it’s a whopping 94 million. They are one of the most popular types of pets, even if it sometimes feels like the cat is the boss.

40441 Shorthair Cats has a self-explanatory title, and makes sense as a LEGO set, given creating the impression of long hair using bricks would have been tricky. So, is it a purr-fect model for cat lovers?

For those LEGO fans who enjoy the company of both cats and dogs (and their accompanying BrickHeadz), 40441 Shorthair Cats is built in a very similar way to 40440 German Shepherd. More bricks are used than a typical BrickHeadz in order to create the body of the cat. Considering the chunky, cartoonish nature of a BrickHeadz, there’s a delicacy to the cat model. Little paws are made from half-circle tiles, and using white gives the impression of little socked feet (yes, those markings are really called socks).

One thing that isn’t quite in line with a feline though is the tail. Cat tails are typically lithe and long (unless you’re talking about a Manx), but this doesn’t translate easily into LEGO bricks. The designers have used a hinged piece, but this is still too angular and it’s a shame some piping or Technic tubing wasn’t used instead.

As it is a shorthair cat, the model is covered in various tiles for a smooth finish, although the use of cheese slopes and some exposed studs add texture so the model doesn’t appear hairless. The contrasting light and dark greys make for an interesting fur pattern, while the pink quarter-tile as a nose is very cute. The whiskers ingeniously use claw pieces, which is both ironic and realistic in equal measure.

Many of these pieces are also transferred on to the kitten. Using them on a slightly smaller model gives the kitten a gangly appearance, which is very accurate. Both cats use 1×2 bowed tiles to recreate pointed ears, helping to add a lot of personality to the finished models.

40441 Shorthair Cats has a basket to display the cats in, but there’s a big problem with it. LEGO is an interlocking brick system, as one movie quote succinctly explains, and it’s this interlocking which gives it its strength. However, due to the size and shape of the basket, the bricks line up perfectly, with no overlapping seams. There is no interlocking. This means that it is very easy to break the corners off as they’re not attached securely.

No minifigures are included in 40441 Shorthair Cats, yet the feline charm of the BrickHeadz has been captured well. Although they look very serene, the use of claws as whiskers could be a subtle nod by the designers to the rather unpredictable nature of cats.

40441 Shorthair Cats has a very reasonable price tag. The build is quick yet engaging, especially in some of the techniques for the faces. It is a shame that the basket stand is so unstable, along with some of the design choices on the cats, but the finished models do look good on display.

Feline fanatics are sure to love 40441 Shorthair Cats, and it’s the type of model perfect for somewhere you would like a reminder of your cuddly companion. One thing that does limit this model slightly is the singular colour scheme. Cats come in a range of coat colours and patterns, so hopefully there will be some LEGO BrickHeadz tabbies, calicos and others in the future.