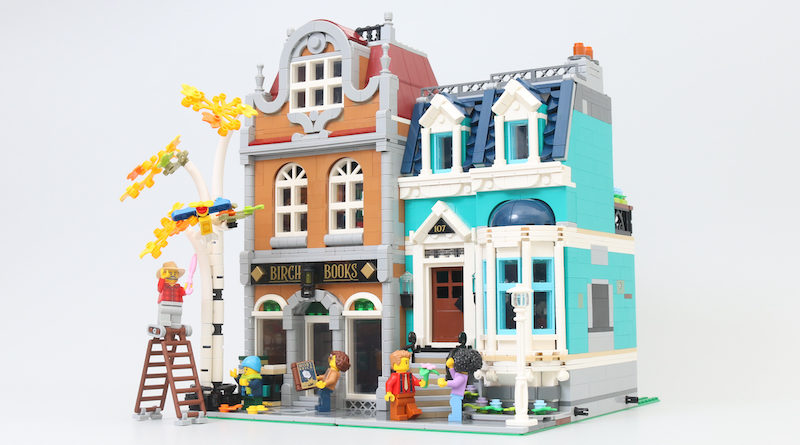 Brick Fanatics brings you the definitive guide to this year’s Christmas shopping with our LEGO gift list for ambitious builders.

Is that LEGO City not complex enough for you? Are the LEGO Batman sets not sophisticated enough your palette? Or do you know one of those build snobs who needs their LEGO Creator sets need to be Creator Expert? Well this is the Christmas shopping guide for you because it covers sets for those builders who demand an advanced build for a spectacular display piece.

If any of these sets, or any others you might be looking for, are out of stock at LEGO.com, sign up for the LEGO Stock Alerts tool – it will let you know when they’re available again.

Whether you’re buying for yourself or ordering for the LEGO fan in your life, this list names the very best sets for the aficionado looking for next level LEGO sets.

Dive in below, and don’t forget to check out the rest of our Christmas 2020 gift lists.

For the budding architect:

Most of the sets on this list don’t come cheap, by virtue of the complex builds and satisfying display models they offer requiring a huge number of LEGO elements. What is so clever about 21051 Tokyo, and the other LEGO Architecture releases, is that it demonstrates how to capture real-life skyscrapers with these tiny pieces.

21051 Tokyo is also a handy LEGO set for those without much display space – that sleek, elegant display stand can fit on a desk or smaller shelf, rather than requiring the dedicated display space that some of the larger models need.

For the Star Wars fan:

Sticking with the smaller, desk-sized models for now, this LEGO Star Wars helmet build offers a clever depiction of the most popular bounty hunter from the galaxy far, far away. Using a mix of techniques and angling pieces in myriad ways, this offers ambitious builders a satisfying set to put together and an elegant display piece when complete.

The other two sets in this series, 75274 TIE Fighter Pilot and 75276 Stormtrooper are arguably slightly cleverer in design and construction, but there’s something special about the iconic Boba Fett helmet, that has made the enigmatic character popular for 40 years.

Is there any LEGO fan who isn’t charmed by the modular building series? Each one is a lesson in the brick system, as it shows different ways to achieve beautiful end results, whether that’s building on a curve, including ornate detailing or using a part designed for one thing for something completely different.

10270 Bookshop also demonstrates what can be done with judicious colour choice, creating a model that a beautiful autumnal palette perfect for being admired when the set is on display. For the LEGO fan who doesn’t need movie or video game characters in their builds, this is a very good choice indeed.

To the untrained eye, LEGO Super Mario 71374 Nintendo Entertainment System looks pretty neat, but what’s so impressive? It’s a replica of an old time television and one of the world’s best known consoles. LEGO fans know though just how hard it is to get those angles right.

Building 71374 Nintendo Entertainment System is like solving an intricate, three dimensional jigsaw, as the instructions guide the builder through a series of small sections that keep adding to the main model until it starts to become recognisable as the NES. It is packed with ‘wow’ moments, as the LEGO designers show off, demonstrating how they can create shapes that feel like they should be impossible within the LEGO system.

No-one will be unimpressed when 21323 Grand Piano is on display and the keys are moving by themselves, with the proud owner of this beautiful LEGO piano controlling it using their smartphone. It’s a set almost made for Christmas, as it’s one of those that everyone will want to see when they visit.

It’s not just that intricate, functional finished model that makes it so intriguing though – it’s also the intelligent design process, that carefully creates a shape that closely matches a grand piano, with the relevant parts all represented on the inside, ready to reveal with the lifting lid.

For the history buff:

They don’t come much more ambitious than 10276 Colosseum. This enormous LEGO depiction of Rome’s most popular tourist spot – and for a city so packed with them, that’s quite the feat – is the largest every LEGO set, with a massive 9,036 pieces justifying the not inconsiderable price tag.

For those who really do love their LEGO though, for those who adore the process of discovery when putting a set together, for those who will slip into the zone of putting bag after bag together, there are few other sets that can match what this one offers. The journey of putting together so many LEGO pieces, in what will surely be a project that lasts for weeks, will result in the most epic model fans have ever had the opportunity to own.

Remember to check out the rest of our Christmas 2020 gift lists, and watch out for more very soon:

If budget is truly no issue, why not check out Brick Fanatics’ Top 20 LEGO Sets List, which ranks the best 20 LEGO sets currently available at LEGO.com?