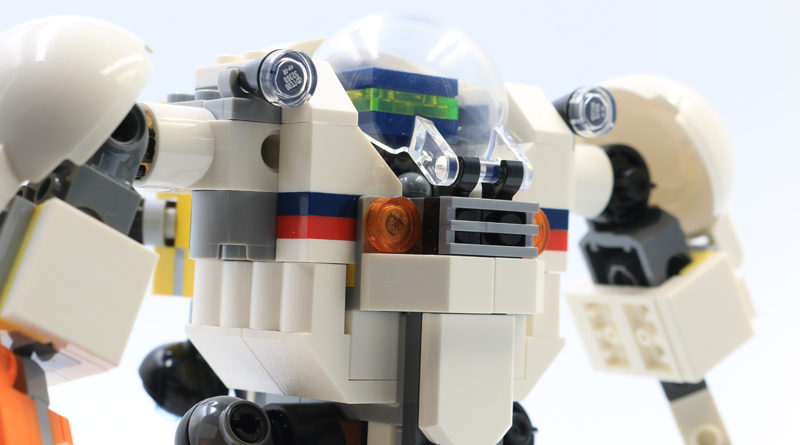 The LEGO Group is blasting back off into space with this year’s Creator 3-in-1 sets, with 31115 Space Mining Mech exploring the unknown riches of the galaxy.

Clad in clean white with some striking accents of bright colour, this set also matches 31107 Space Rover Explorer, as it’s apparently important to be fashionably coordinated even in zero gravity. Mechs are nothing new in the LEGO catalogue, but they are unusual in the 3-in-1 range – so is 31115 triple the mech goodness, or is it one mech too far?

One big improvement in recent 3-in-1 sets is the inclusion of three separate instruction booklets. Gone are the days of flicking through the seemingly endless pages of one big booklet, and now it’s easy to just look at the cover of one to find the build you want to do first.

For the main mech, things actually start with the auxiliary models. These are small but do add to the role-play potential of the set. There’s a little green alien that uses new 1×1 round tiles with oblong printed eyes, making the character look more reptilian. Then some neon trans-green 1×2 bricks create unearthly crystals, although it’s a shame none of the geode elements were included.

Being the largest of the three models, the main mech itself uses practically all of the 327 parts included in the box. Its torso is very sturdy, using inverted roof bricks and 2×6 plates to anchor things together into a strong skeleton. Ball joints can look out of place on organic models, but are well incorporated here, giving the model a great range of movement. Considering its mechanical nature, there is surprisingly very little Technic in 31115, with only a few pins in the shoulders to support the arms.

As each arm is different, the model isn’t too repetitive to build. Pearl-grey tooth elements are cleverly used to make a rotating saw blade, while globe-stick elements are flexible fingers. There isn’t as much detailing on the back of the mech, but a selection of yellow bricks and tiles creates a boldly-coloured backpack to store the LEGO crystals inside. Engines are also added on, ingeniously made from LEGO plant pot pieces, and they are the perfect excuse to swoosh this model around.

The second mech is far spindlier, with more emphasis on the legs. However, they’re jointed backwards, which means the model can only be posed at certain angles – otherwise it will topple over from being top-heavy.

While it uses the fewest pieces, the final mech is probably the most realistic of the three, possibly even somewhat inspired by the real-life rovers sent to Mars. However, it is a shame that the claw arms on the front of the mech can’t grab the crystal bricks.

31115 comes with no minifigures, though at least one astronaut would have been very welcome – even if only to stand alongside the mech.

With three enjoyable models in one set, 31115 Space Mining Mech is pretty decent value for money. However, although fans will enjoy playing with this model and coming up with space adventures, it really feels as if it’s missing a minifigure or two to man the mechs, which would have made this set even better for the price tag.

Space fans young and old are sure to like 31115 Space Mining Mech. Although not all three mechs are as amazing as each other, it’s still impressive that the designers have made three distinct models from the same range of parts. The only slight criticism comes in the absence of minifigures, which isn’t noticeable if this model is for display, but fans playing with the little aliens might be disappointed that they can’t have close encounters of the brick kind.