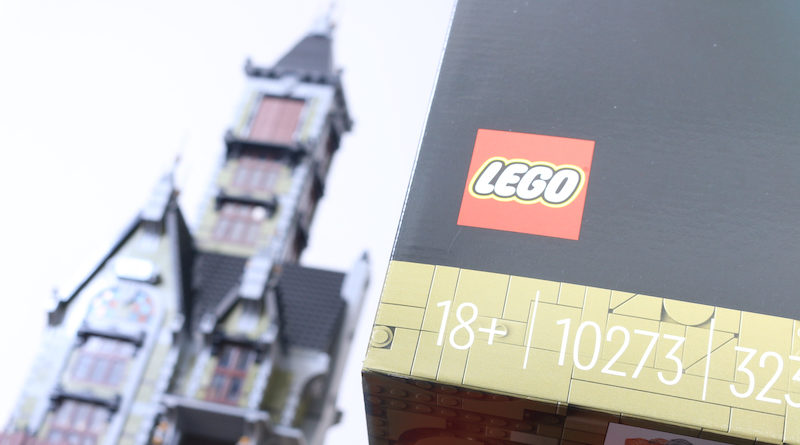 LEGO Fairground Collection 10273 Haunted House is an 18+ set! Is everything good about it because of that, or in spite of it?

If you’ve not noticed through the various communications, Guardian think-pieces and very cool lifestyle shots of new set releases, the LEGO Group is targeting adults now.

10272 Old Trafford (review) and 76139 1989 Batmobile (review) were early, overt indicators of the company’s intentions, before the Star Wars Helmets took us a step further with 18+ age recommendation sets and luxuriously stylised box art. On from that trio of releases, the latest adult-orientated LEGO set comes in the form of the Fairground Collection theme’s 10273 Haunted House.

So, adults, what are the differences between an 18+ LEGO set and, say, any other LEGO set? And, if you are a discerning adult looking to get into this brick-based hobby, or, already deeply immersed in LEGO and looking for the next expert-level challenge, is 10273 Haunted House the set for you?

Well…let’s start with that age recommendation. The LEGO Group’s ambition to attract more mature fans above the age of 18 has to begin somewhere, and, some themes that have previously carried branding, build difficulties and tones targeted towards older LEGO builders but not specifically aged above 16+, such as the Creator Expert range, will have to draw a line somewhere, so as to make the jump into the 18+ world, which brings with it the new packaging and marketing spiel.

That the jump for the Creator Expert theme comes with 10273 Haunted House, rather than, say, 10261 Roller Coaster, is unfortunate. That roller coaster was complicated, challenging and a genuine spectacle on display, with the offer of a motorised option that added true value to the final build. It took a previous idea only otherwise visited in brick form on a much smaller scale and truly explored the creative potential of LEGO. As an example of a previous set that would be at home with an 18+ age recommendation, that’s the first that comes to mind. 10273 Haunted House, however, isn’t a LEGO set that quite as well fits the adult building world it is being more specifically labelled for than such Creator Expert predecessors, and that is unfortunately so, seeing as a) it has to be one of the first for that new market and b) it’s a good set in its own right, without that label.

Indeed, whether you put stock in the LEGO Group’s marketing (and so may be swayed by packaging and age recommendation) or you are someone who throws away the box as soon as you have poured the pieces out (and with that, any last mention of the recommended age), most importantly the higher age recommendation just doesn’t change a lot beyond the surface level. Putting 18+ on the box brings with it darker, more premium-style artwork and slightly trickier instruction steps, almost akin to the older days of LEGO building ­– a little more complicated with more pieces added per step and those additions not always made so obvious between steps. Beyond that, though, the build level doesn’t differ at all to previous sets, and, for what you actually build and – complicated ride mechanism aside – for the techniques used, the age recommendation feels misplaced.

And that’s something that will happen moving forward in a world where the LEGO Group is saying ‘this is for adults’. If you’re a LEGO fan building between themes and age ranges, sets like 10273 Haunted House, which we are being asked to consider as different, are going to initially suffer in reviews and in reactions, rightly or wrongly. Putting aside what the age recommendation can influence – expectations and first impressions – 10273 Haunted House is a fun set that comes out of a slightly challenging but ultimately repetitive build process and that presents a unique play function at its heart, peppered with obvious callouts to a popular theme that hasn’t been on shelves for 17 years.

It looks fantastic on display thanks to a 360-degree build with dollhouse opening mechanism that creates detail on all sides inside and out. The height of the tower – the result of the internal Tower of Terror-style ride and play feature inside – adds to the visual impact of the building. Whilst it sits on a square base made from four 16×16-stud bases (so, 32×32 studs wide), that height, which with it brings tall, slanted roofing, allows the house to loom over other LEGO sets you may have on display and more than hold its own against some of the larger sets out there.

Inside, display tells the story of Manor Von Barron. Belonging to Adventurers villain Samuel Von Barron (perhaps more an amalgamation of that theme’s Sam Sinister and Barron Von Baron), it is filled with builds and details primarily from the 1998-2003 theme. These are fun nods to a theme that will most certainly trigger deep nostalgia within older fans (we see what you did there, LEGO). They are details that are so good that they in fact also serve to the detriment of the minifigures included.

The ghosts offer a modern update on a classic design, but the ride visitors and the bearded twins feel like fillers where there were any number of opportunities to really go all in on the nostalgia at the same time as keeping within the Fairground Collection world. How about an older Baron Von Barron still living in the house guarding his relics, with a loyal butler welcoming guests in, raising funds for the upkeep of the building, and sending people on their way up the ride? Or even an aged Johnny Thunder, perhaps undercover for a secret visit to his nemesis’ mansion? What about a visitor or two dressed up as Von Barron or Thunder, visiting an Adventurers-themed ride in their hero’s attire? As it is, some of the best printed pieces and direct nods to a previous theme that a set has seen for some time are mismatched with a forgettable line-up of characters.

Elsewhere, the play functions have been kept to a minimum, with just the three, split between the opening front door, the show-stealing ‘haunted’ light-up portrait of Baron von Barron (LEGO graphic design continues to excel at the moment) and the tower drop ride. That latter play function is where the set does innovate, for the ingenuity of how some relatively simple gearing and well-placed rubber wheels can smoothly lift the willing (or unwilling) passengers up the shaft of the tower at the turn of an exterior handle, before reaching the top, prompting the doors to open and the belt to uncouple the carriage and drop it back down, ahead of its landing being cushioned by a dozen or so of the wheels.

It’s a fantastic play feature for how effectively it works, and for the fact that it can also be motorised with the additional purchase of relevant Power Functions parts. However, it is also a play feature that comes only after an 18-stage build that is one of the more repetitive of recent times. For how often you’ll be placing olive green bricks and window frames together, alternating with light grey bricks and rounded plates, you’ll need the will power and attention span of an adult to get through it. Genuinely, do not think about that tower whilst you are building the first level of the house, because you’ll only be hurting yourself.

How to motorise LEGO 10273 Haunted House

As an aside, during lockdown those of us at Brick Fanatics have been asked by friends and family about LEGO sets to recommend to them. They are all adults, and have all asked similar questions, in search of something to ‘occupy the time’, that is ‘satisfying to build’ and is ‘good value for money’. Our recommendations have centred on some of the larger sets in themes like Creator Expert and Technic, but, have also more often than not landed on Architecture. That is a theme that has known from much earlier in its life that it’s for an older, more mature builder, and over the years it has developed build techniques that not only create clever, eye-catching final models, but that also engage the builder throughout the process. There is a greater consideration towards build experience with that line that 10273 Haunted House falls short on.

For instance, 21046 Empire State Building released last year with the record for the highest number of a single LEGO piece included – 200 of its 1,767 pieces are the 1×2 grille tile piece, all placed on the exterior of the building to mimic the real-world version. Yet, such is how you put together different components of the model in different ways, not once in the process are you frustrated, or find your mind wondering. That’s not quite the same experience for 10273 Haunted House where, for how the parts have to be dispersed across the model, it is unfortunately as unavoidable as it is evident. It should be noted that as a theme, Architecture falls under the same Creator Expert design team behind Haunted House.

Is 10273 Haunted House a set to recommend to adults or – as it should be – any LEGO fan during lockdown or after? The build process isn’t the most satisfying and there are better examples out there for those who are prioritising this part of the experience. Likewise, anyone genuinely after something for a more mature LEGO fan and otherwise pulled in by that 18+ age recommendation and fancy black box can find a decent number of more challenging and engaging models to put together. At the same time, the minifigures are certainly nothing to shout about, for any age LEGO fan.

However, 10273 is by no means a bust, particularly for those looking forward to a first large scale haunted house since 2012’s 10228 Haunted House and for whom the age recommendation means very little.

The final build creates truly engaging display both inside and out, telling story, offering atmosphere and generating decent size across its 3,231 pieces. The model also offers unique functionality with its core play function that admittedly is comparable to the otherwise more all-round 18+ appropriate 10261 Roller Coaster. It’s a play function that, much like with the roller coaster’s own working motions, will never get boring to play with. Finally, pulling us in with all those Adventurers nods, details and printed pieces is a clear and obvious trick, but, one that sadly or not we are falling for. As a trio of plus points, these are important to note as they are strengths that will stand the test of time where minifigures, build process and age recommendation really won’t.

10273 Haunted House isn’t perfect, and by no means clearly sets a marker for the 18+ direction the LEGO Group wants go with particular sets and themes, but, there’s still plenty to more than appreciate, and importantly in all the right areas. Make sure to not miss this set, it won’t hang around forever. Be haunted by it, not for failing to buy it.

10273 Haunted House is available now at LEGO.com. You can help support Brick Fanatics’ work by using our affiliate links. 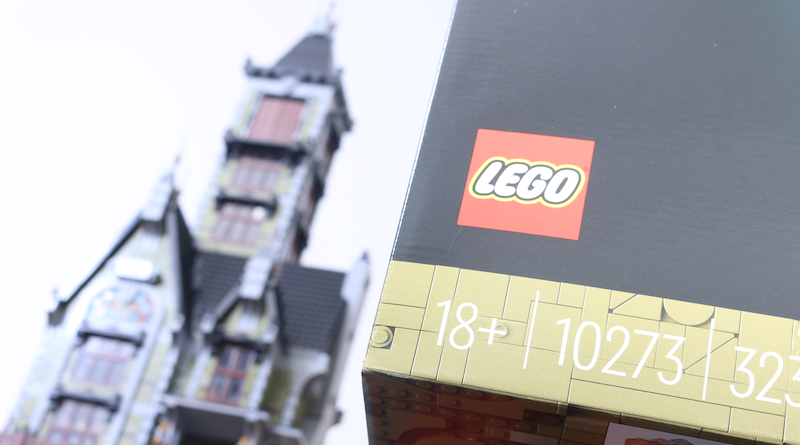