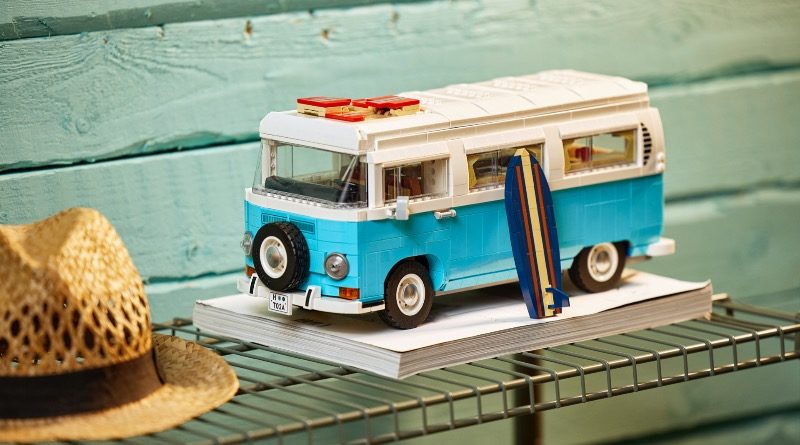 The LEGO Group has officially unveiled the latest addition to its growing garage in 10279 Volkswagen T2 Camper Van, a follow-up to one of its most successful Creator Expert sets.

2011’s 10220 Volkswagen T1 Camper Van hung around on shelves for years beyond a usual LEGO set’s lifespan, before finally retiring last December. That was clearly only to make way for this newer, bigger and beefier version, which is based on the second model of the classic camper that debuted in the late ‘60s and early ‘70s.

Look a little closer, and you’ll also notice a handful of design differences that reflect the changes in the real-life camper between T1 and T2, including the newer model’s wraparound bay-window front windscreen. Its squarer face also mirrors the T2’s angular design, though there’s a spare wheel covering where you’d usually find the VW logo.

There’s a fully-equipped interior, too, including a fridge, sink, gas stove and opening cabinets, along with a set of folding chairs and a surfboard for beach trips. 10279 Volkswagen T2 Camper Van also goes one step beyond its predecessor by packing in working steering, and includes a sticker sheet tailored towards customisation.

“The Volkswagen Camper is a rare breed of vehicle that commands affection like few others, and we know the LEGO version will bring a lot of fun to people who’ve been lucky enough to have or go camping in one, or always wanted one,” said designer Sven Franic.

“Though the Volkswagen Camper is no stranger to our LEGO cars collection, this latest iteration brings even more delights for LEGO builders. The meticulously-kitted-out interior is sure to charm seasoned campers and adventurers alike, while the eye-catching exterior with pop-up roof is a feat of engineering just like the original.”

10279 Volkswagen T2 Camper Van will launch at LEGO.com and in LEGO Stores on August 1, 2021. While you wait, check out our review, browse the gallery of official images and see how it stacks up next to a real-life T2 van.