It is time to journey back to Hogwarts and step inside the Great Hall. What kind of magic has the LEGO design team conjured up in this new Harry Potter release?

“‘Welcome to Hogwarts,’ said Professor McGonagall.” That is how Harry Potter gets his introduction to the school in Harry Potter and the Philosopher’s Stone, but in this case the phrase “welcome back” is more appropriate. The iconic location, the centrepiece, the beloved Hogwarts School for Witchcraft and Wizardry is back in the brick, as part of the relaunched LEGO Harry Potter theme. 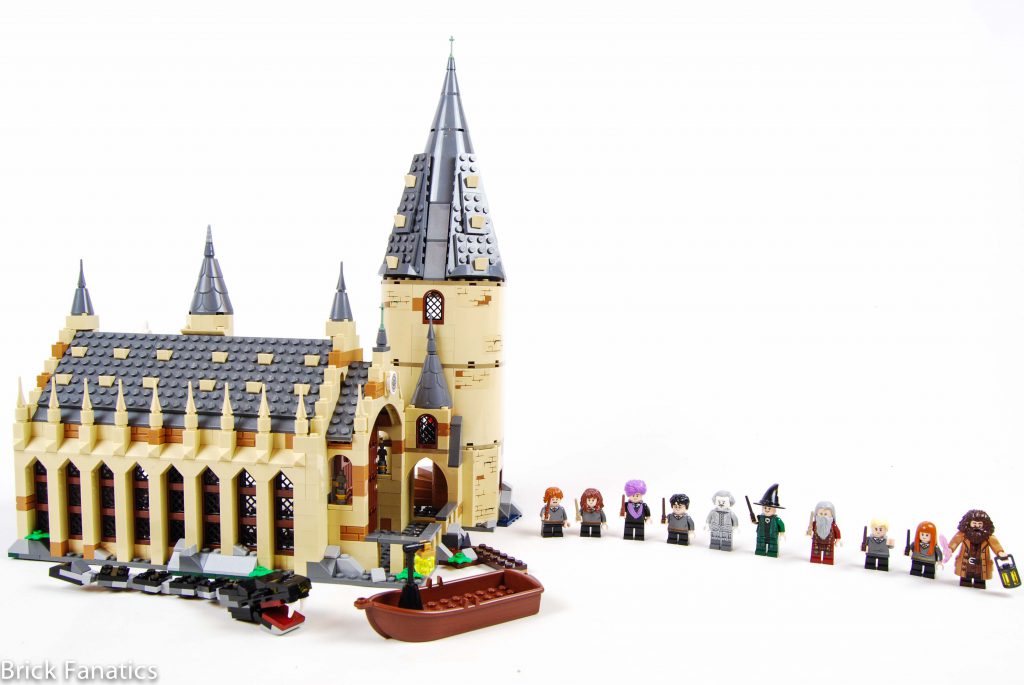 There is an old axiom that “something which tries to do everything does nothing well”. In most cases this statement holds true and a multi-tasking product often fails to execute any of its individual purposes as well as a more specialised option. Fortunately, there are exceptions such as 75954 Hogwarts Great Hall. Somehow, designers have managed to reference multiple films, create an attractive model with a high level of detail, include a pleasing ten minifigures, and do it all for under £100. That is a bit of magic on par with anything taught at Hogwarts.

Hogwarts Castle is the most repeated location in the LEGO Harry Potter line since its inception back in 2000. There have been no fewer than ten major sets depicting some part of the school and many more re-creating single rooms. Detail, and movie accuracy has risen with each successive iteration culminating in the 2010 release, 4842 Hogwarts Castle.

75954 Hogwarts Great Hall feels very similar to that most recent version in terms of detail, although the aesthetics are very different thanks to swapping out the old sand green roofs for more accurate dark grey. Rather than make a single large Hogwarts set this time, the LEGO Group elected to split the castle into two products, channeling the way it was done back in 2001, when multiple sets could be combined into a single, epic, Hogwarts Castle.

This was a brilliant move. 75954 is a brilliant set all on its own and contains everything needed to re-create satisfying versions of favourite film scenes or enact new adventures. Then for those with the means, it can be joined to the castle sections from 75953 Hogwarts Whomping Willow into an even larger structure, that rivals 4842 in footprint. Individual parts adding together to a greater whole can add so much value to a line of sets and it works really well here.

Ten minifigures are included, several of which are exclusive to this set. Unlike past themes such as The Lord of the Rings, the LEGO Group did not spread main characters throughc a bunch of different sets, requiring fans to purchase almost the whole line to acquire the major characters. It was a pleasant surprise to find that the three main heroes, Dumbledore, Hagrid, and Professor McGonagall are all included along with some additional figures including two villains in the form of Professor Quirrell and Draco, not to mention the brick built Basilisk and Nearly Headless Nick. In an era when minifigure counts tend to drop, such a high number in a set this reasonably priced is highly unusual.

Multiple homages to past LEGO versions of Hogwarts as well as the films and books are included. The Great Hall looks splendid with new square latticed window elements used in abundance as well as the new candlestick components. Fans of a certain vintage will fondly recall the swiveling staircase elements created to mimic the ever changing flights of stairs in the castle. They are included here in dark tan for the first time. The first two installments in the series are most referenced with the Mirror of Erised, boat for first year arrivals, Hagrid’s umbrella and Basilisk figuring prominently in the set.

The set will obviously appeal to Potter fans who will find no reason to be disappointed by this release, but is there also value in 75954 Hogwarts Great Hall for LEGO fans who are not also Potterheads? I would suggest that there is, as the set could be modded into a church or cathedral for a City setting, or those who long for the return of Castle could use this in the interim as part of a layour.

While there is plenty of play packed into thise set, 75954 Hogwarts Great Hall looks great on display too, especially when paired with 75953 Hogwarts Whomping Willow. Harry Potter fans are sure to enjoy this set, which delivers exactly what was needed after such a patience testing absence. Welcome back, indeed.

75954 Hogwarts Great Hall is available now at shop.lego.com. You can help support Brick Fanatics’ work by using our affiliate links.