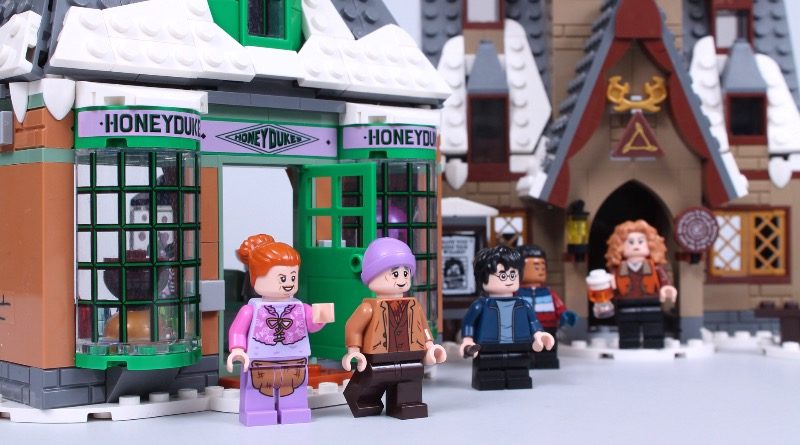 The most surprising addition to the LEGO Harry Potter 20th anniversary line-up boils 75978 Diagon Alley’s DNA down into a more wallet-friendly set for 76388 Hogsmeade Village Visit.

This pair of buildings sits distinct among the 20th anniversary wave, in that we’ve never visited this particular wizarding village in LEGO before. Where you can trace the roots of almost every other set in this summer’s line-up that includes a golden minifigure to the original 2001 product line – bar, perhaps, 76392 Hogwarts Wizard’s Chess – this is our first trip to LEGO Hogsmeade.

That should broaden the set’s appeal beyond just fans dipping their toes into the nostalgia pool, but even non-Potterheads may be eyeing this one up, given its seasonal décor makes it ripe for plonking into a wider Winter Village display. That’s a lot of potential squirrelled away in one 851-piece set – but how does it bear up in the plastic?

Unlike last year’s 75978 Diagon Alley, which had the luxury of a £370 price tag to take a few deep dives into the shopping street’s establishments – who really remembers Scribbulus Writing Supplies from the books or movies? – 76388 Hogsmeade Village Visit has the unenviable task of recreating the entire village in just two buildings.

Fortunately, the designers have wisely chosen Hogsmeade’s most iconic institutions in The Three Broomsticks pub and Honeydukes sweet shop. They both adopt the same façade approach as Diagon Alley’s buildings – and, indeed, the Winter Village Collection – which allows them to build tall and pack in plenty of detail.

That’s particularly true in Honeydukes, the ground floor of which offers a veritable cornucopia of colourful printed pieces to play with. It’s reminiscent of 75978 Diagon Alley’s interiors in all the best ways, right down to its tiled floor, and really does feel like a stepping stone to that larger 18+ build.

The same is true of the pub, which makes liberal use of fireplaces and candles to evoke the cosy feeling the real thing might present on a snowy winter’s day. These two-storey interiors are really the highlight of 76388 Hogsmeade Village Visit, and undoubtedly the most entertaining parts of the build, which is otherwise disappointingly straightforward.

That’s only really because save for a few white wedge plates, the exteriors to both buildings lack much of anything in the way of detail, and what detail there is essentially relies on stickers that are an absolute pain to line up.

Remember the window stickers in 75978 Diagon Alley’s Quality Quidditch Supplies? Honeydukes takes those transparent-backed decals and pops them on rounded windows. It’s as fun as it sounds – and that’s really only the tip of the iceberg where this set’s very many stickers are concerned.

Mostly, though, the disappointment in the simplicity of the build – you’re essentially constructing a single floor per building, then just supports for the angled roofs – stems from the fact that this isn’t a cheap set, and you’d be forgiven for expecting a little more from a £69.99 product.

The scene it builds into does end up feeling better value for money, though, aided by three small sub-assemblies – a bench, lamppost and wanted poster – that breathe life into LEGO Hogsmeade. And while it may not be a true 20th anniversary set in the sense that it doesn’t draw on a specific 2001 release, 76388 Hogsmeade Village Visit’s snowy décor does stoke slightly different flames of nostalgia.

We’re talking specifically about the LEGO Harry Potter video games, both of which feature Hogsmeade in levels and as a free play area, and both while covered in snowfall. In that sense, the deliberate design choice to plant 76388 Hogsmeade Village Visit firmly in winter is both accurate to how we see the location portrayed on screen, and plays into the anniversary celebrations in an alternative – but no less welcome – way.

While the smaller sets in the 20th anniversary wave are mostly content to rely on the iconic trio plastered on this year’s boxes, 76388 Hogsmeade Village Visit leans into the new territory it represents as a set in its minifigure selection, too, bringing us three brand new characters among its seven-strong line-up.

Honeydukes owners Mr. Flume and Mrs. Flume are the kind of obscurities you’d never expect to see in minifigure form, but they’re totally in-keeping with the video game vibe this set gives off (having both appeared as playable characters in LEGO Harry Potter: Years 1-4). They’re not the most exciting characters, but for veteran collectors they’re more welcome than, say, another Ron and Hermione. (Although Ron does appear anyway, just cast in gold.)

Madam Rosmerta and yet another brand new Professor McGonagall are the real highlights in terms of minifigure design, but there’s not really a duff character among the lot – especially if you’re still building your own army of Harrys, and especially if you’re collecting the golden 20th anniversary minifigures.

While 76388 Hogsmeade Village Visit represents a good deal on paper – 851 pieces and seven minifigures for £69.99 / $79.99 / €79.99 would be fine even in a non-licensed theme – the slightly disappointing build experience does rob the set of a little of that value.

It’s only a little, though, because by the time it’s assembled you won’t regret laying down the dosh for a build that seems readymade for expanding – whether through an existing Winter Village display, or in using it as a starting point for your own lesser-spotted Hogsmeade buildings.

For an initial outing into LEGO Hogsmeade, you could do much worse than 76388 Hogsmeade Village Visit. Across 851 pieces, this 20th anniversary set (if only by association) boils down the approach of 75978 Diagon Alley into a model that’s more appropriately targeted for the wizarding world’s less iconic shopping destination.

Both of its buildings will be comfortingly familiar to Potter fans, and they’re distinct enough in their interiors that their otherwise straightforward builds shouldn’t put you off too much. Plus – we’re calling it now – you’ll basically never get another chance to pick up Mr. and Mrs. Flume.

How long does it take to build LEGO Harry Potter 76388 Hogsmeade Village Visit?

76388 Hogsmeade Village Visit flies together in around an hour and a half, which isn’t a great deal of time for a set of this size. The stickers may extend that duration by 10 minutes or so.

How many pieces are in LEGO Harry Potter 76388 Hogsmeade Village Visit?

How much does LEGO Harry Potter 76388 Hogsmeade Village Visit cost?