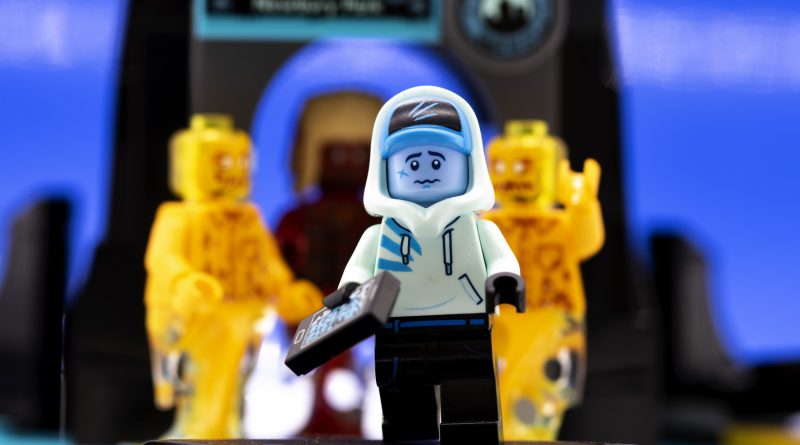 LEGO 70427 Welcome to the Hidden Side offers fans the opportunity to take a trip to the titular location… is it a journey worth taking?

Across two waves of sets, the Hidden Side theme’s fictional town of Newbury has been populated with an impressive array of buildings and vehicles including schools, diners, fairgrounds, monster trucks and busses. There’s just one problem the residents have – they are all haunted.

Now, brave ghost hunter Jack is taking the fight directly to the ghouls and stepping into their world, into the Hidden Side. LEGO 70427 Welcome to the Hidden Side contains 189 pieces, which go together to build a terrifying portal that leads to Newbury. The set also includes three ghosts – Scrimper, Waylon and Axel Chops, while Jack himself is in a spooky shade of blue.

Compared to some of the other sets in the theme this is one of the smallest. Like a lot of the other sets it contains some excellent pieces, exclusive to the set, such as an 8×8 half circle and large plant pieces in medium azure and two black big ugly rock pieces (BURPs).

The build itself is fairly straightforward and simple. Evident by the inclusion of the two black BURPs. While they do add detail and height in a single step, it always feels more satisfying when the same look is achieved through a number of parts. Because this build is based solely on the imagination of the designer and not anything from the real world, it’s hard to know what is being built at the start but there is some nice shaping that starts to emerge midway through the first bag. The arched tunnel and curved sides add interest to what would otherwise be a very basic build.

The second stage of the build sees more detail being added such as big, imposing looking claws, luminous 1×2 plates with teeth and plant leaves in medium azure. The colour scheme of medium azure and black is not only incredibly rare to see in LEGO, making for an interesting display piece, but it also creates an unsettling mood for the build. This feeling is continued by the symmetry of the model – or lack thereof.

More often than not LEGO designers will create models that have perfect symmetry, it not only looks good but feels very satisfying to construct. In this set everything is slightly off centre, making it feel slightly odd and leaves it looking a little weird. Normally this wouldn’t be a positive, but here it works wonderfully in creating the sense that there’s something unusual and not quite right about this set. Whether it’s intentional or not, it’s a definite plus.

On top of the main structure sits a terrifying monster with its mouth open wide and teeth exposed. The detail made from the 1×2 and 1×1 lime green plates with teeth, large black barbed pieces for the eyebrows and, rather smartly, a black minifigure skeleton torso for the facial features. It’s a very clever usage of parts that really looks effective.

Once finished the overall design looks good, but it’s a little hard to work out exactly what it is and what you are supposed to do with it. There’s one play feature, which sees bats and spiders spewed out of the monster’s mouth. It works perfectly fine but adds to the slight bewildered feeling this set leaves. Of course there’s the AR functionality, but that only offers so much in the way of longevity.

The minifigures are, as to be expected with Hidden Side sets, exceptional. Jack sports his usual hoodie and cap piece, but this time, because he has crossed over to the Hidden Side, his attire is in a light aqua colour and his head piece in a bright light blue. The three ghosts, Scrimper, Waylon and Axel Chops, each have their own trans-clear lower ghost bodies that have been seen before, but here they are in a marbled red and marbled bright orange pattern, exclusive to this set. With a decent light source behind them they really do look like they are floating. All four minifigures are exclusive to this set as are their torsos, leg pieces and heads.

While 70427 Welcome to the Hidden Side is a decent build, the magic of the Hidden Side theme is constructing seemingly everday vehicles, locations and objects that hide a paranormal twist, something this set is severely lacking.

As an accompanying set to the rest of the theme it’s great to have the Hidden Side represented and the inclusion of the three ghostly minifigures will not only add tons of play value to this set but also any others in the theme. As a stand alone set though, especially as it is the first to represent the ghostly realm, it feels a little on the light side. If you are a huge fan of this theme, then definitely add this to the collection, but if you’re new to the theme it is probably better to look elsewhere for now.

70427 Welcome to the Hidden Side is available now at LEGO.com. You can help support Brick Fanatics’ work by using our affiliate links.