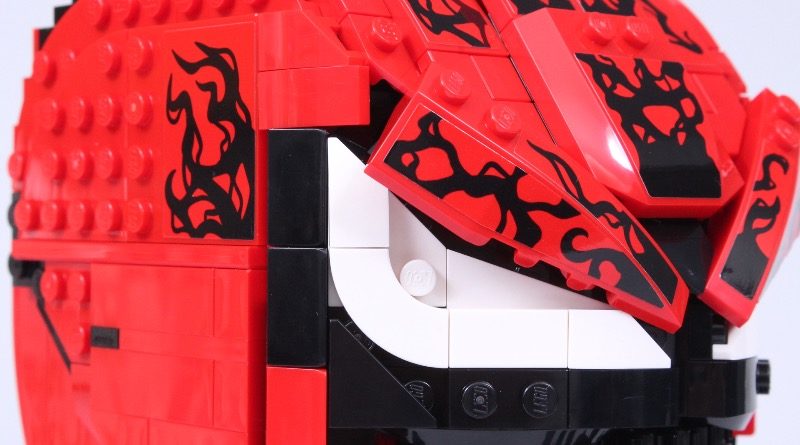 76187 Venom gets a nemesis in 76199 Carnage, but can these two very similar symbiotes both warrant a slice of your LEGO Marvel budget?

On the face of it, there’s little to separate both of the latest Marvel busts beyond their respective colour palettes. Both use the same snarling teeth; the same asymmetrical eyes; and the same organic shaping that separates them from the LEGO Star Wars Helmet Collection.

And that means that just like 76187 Venom, 76199 Carnage is perfectly suited to the 18+ tag. It’s based on a character with a real mean streak (to put it lightly), and delivers a bust so frighteningly sinister that you probably won’t want it on display in the place where you sleep.

If those attributes are shared between these near-identical sets, though, is there any point buying them both? And if not, which one deserves the honour of joining your collection?

76199 Carnage presents much the same build as 76187 Venom, so it’s worth digging into our review of that symbiote for a closer look at the basics of how the sculpts come together. Where 76199 Carnage stands separate is in its colour scheme, and – by virtue of the character’s two-tone detailing, compared to Venom’s black-on-black – its not-insignificant sticker sheet.

Beyond the difficulties posed by applying those stickers (particularly on the wedge pieces used for eyebrows, which frustratingly don’t align across both surfaces – leaving a gap at one end you probably won’t notice until it’s too late), this isn’t an especially taxing build for either the price point or that 18+ tag.

Don’t mistake that simplicity for tedium, though. Just as with 76187 Venom, the sub-assemblies that coalesce to form the natural shaping of the symbiote’s head are pretty pleasing to construct, and even more satisfying to connect together. Things get a little fiddlier around the jaw, which requires careful positioning of triangular tiles to mask the transitions between hinged pieces, but it shouldn’t pose too many problems for experienced builders.

In fact, the whole thing flies together in just under an hour – and if this is your first venture into buildable bust territory, you may end up feeling a little underwhelmed by both the duration of the build and the size of the finished product. It’s great for shelf space, but less great for feeling like you’ve extracted much value out of 76199 Carnage.

So, does it at least work as a display model? Yes – and no. Just like 76187 Venom (a phrase we’re banding about way too much), this is a seriously creepy representation of a Spidey villain that’s about to get a whole bunch of mainstream exposure in this year’s Venom: Let There Be Carnage.

Much of that is down to the teeth, which don’t stand out quite as much as its counterpart’s tan-coloured spikes and claws – but the black elements actually work to 76199 Carnage’s advantage in a way, creating that messy look that’s otherwise weirdly absent here.

While the aesthetic of this particular bust may be at least somewhat inspired by the character’s appearance in Andy Serkis’s upcoming sequel, the box makes no allusions to that movie, instead proclaiming that this set – just like 76187 Venom (again!) – is ‘assembled from the Spider-Man universe’. If that’s true, though, it actually creates problems for 76199 Carnage.

Problems like: why are his eyes so small? Even the pics on the back of the box show the comic book character with huge, daunting white optics. And: why is the only detail conveyed through a handful of small stickers? You don’t really get any sense of the chaotic, organic tendrils that have largely defined the symbiote’s aesthetic in the comics, with the finished model coming across as relatively flat and uninspired.

It’s a shame, because this really feels like daring new territory for the LEGO Group. With a wealth of classic Marvel heroes and villains just begging for the helmet or bust treatment, going off-piste with such a niche baddie (even if it is only to capitalise on a corresponding movie) is a welcome move, particularly next to the predictable second run of LEGO Star Wars helmets.

But looking at what 76199 Carnage builds into, it’s difficult to get genuinely excited about the end product.

None of the Star Wars, Marvel or DC helmets, busts or cowls contain any semblance of a minifigure. If you’d like a tiny symbiote to display alongside 76199 Carnage, make a beeline for 76173 Spider-Man and Ghost Rider vs. Carnage, which is available now.

£54.99 / $59.99 / €59.99 is basically the standard price point for these sets, with only outliers like 75304 Darth Vader Helmet and 75305 Scout Trooper Helmet bucking the trend. In the context of those models, this feels about right – but on its own, 76199 Carnage’s surprisingly small size might leave you wondering where your money went.

Frustrating constraints like time, money and space prevent most of us from simply amassing every product the LEGO Group churns out, and with so much variety to be found elsewhere, chances are you’ll only want one of 76187 Venom or 76199 Carnage.

If that is the tricky situation you find yourself in, 76187 Venom is really the one to go for. Both busts have similar strengths, but this particular design feels much better suited to Venom – if only because the all-black palette doesn’t need to rely on some pretty lame stickers to imbue any sense of the original character.

While the symbiotes are similar enough in the comics, 76199 Carnage really would have benefited from a more unique take than simply copying and pasting its counterpart’s build.

Support the work that Brick Fanatics does by ordering your copy of 76199 Carnage from Zavvi or LEGO.com using our affiliate links.

How long does it take to build LEGO Marvel 76199 Carnage?

Blink and you’ll miss it: experienced builders will put together 76199 Carnage in just under an hour. Feel free to take your time, though – the price tag sort of demands it.

How many pieces are in LEGO Marvel 76199 Carnage?

76199 Carnage matches 76187 Venom in height and width at 19cm and 9cm respectively, but falls 4cm shorter in depth – for a total of 15cm – thanks to the all-black symbiote’s tongue.

How much does LEGO Marvel 76199 Carnage cost?