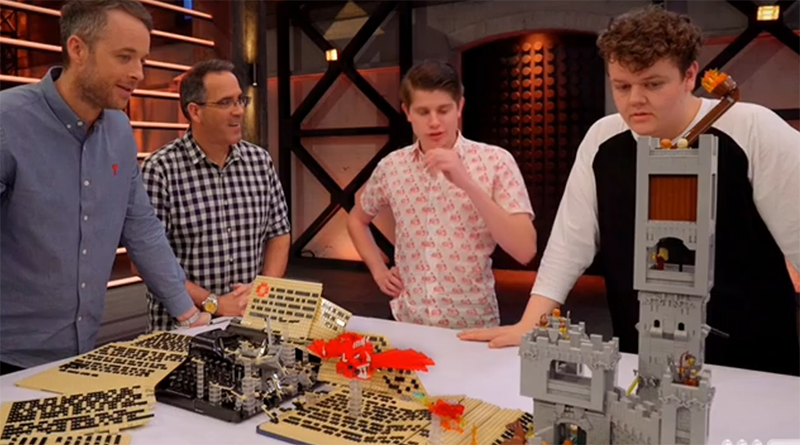 Reviews Sets
01/05/201904/02/2020 Graham 1677 Views 0 Comments LEGO, LEGO MASTERS, LEGO MASTERS Australia, LMAUSS1, Nine, televisio 3 min read
One team is eliminated in the third episode of LEGO MASTERS Australia, as each team must build the second half of an existing object The dramatic Australian edition of LEGO MASTERS is very different to the quaint British version – not better, just different. One thing that the original UK version of the series is clearly winning on is simplicity of format; in this third episode, the team judged to have performed least well is eliminated. Dinushi and Gayan won immunity last week so sit this task out, while Matt and Lyn have the golden brick which they could use in exchange for immunity but choose not to. In the original format, a team went home every week – no immunities, no complications. In this third episode, the task is a tricky one – the teams are presented with half of an everyday object which they then have to build another half for. Rather than just going literal though, they are encouraged to be imaginative with how they do so. David and Gerhard have a change of heart with their model, which pays off in spades when the model is judged by the man of brick. Taking half of a projector, they build the rest as well as concocting a movie aerial battle that it is projecting, clearly having paid great care to the motion to give the aeroplanes authentic movement. Henry and Cade’s teamwork is impressive and leads to them coming out on top this time. Not only is their build aesthetically and conceptually brilliant but seeing the way they work together in a constructive manner is extremely satisfying. Kale determines the concept for his and Bilsy’s model again, displaying a little of the arrogance that has been portrayed in the first two episodes, but to a lesser extent. The finished model they concoct is impressive given the time constraints based on a very solid idea. Lyn never seems entirely convinced by Matt’s ideas for their model, which sort of works but leads to them coming deservedly close to elimination. Jordan and Miller produced a solid build that did not have the wow factor, but that is only because of the standard of some of their competitors. Few builders could conceive of and put together half a typewriter and a storybook scenes in the time constraints, so perhaps they deserve better than faint praise. Jimmy and Maddy managed to squeak through to the next round, despite yet another build themed around themselves. Given that they seem to lack the imagination of other teams and are not quite able to use non-square bricks, they seemed perfectly legitimate contestants to be eliminated. Seeing Marielle and Kaitlyn is very disappointing. While their model was weaker than in previous rounds, they have an excellent aesthetic sensibility and really brought something fresh to the challenges. It is a shame that this challenge was an elimination round, as there is no way they would have been sent home following either of the previous two tasks. Now that the eliminations have started, LEGO MASTERS Australia will continue to be tense viewing – and, improbably, watching people build with bricks for an entire hour is still not boring. Read more LEGO MASTERS Australia reviews: Episode 1 Episode 2 Episode 3 Episode 4 Episode 5 Episode 6 Episode 7 Episode 8 Episode 9 To continue to support the work of Brick Fanatics, please buy your LEGO sets from shop.LEGO.com and Amazon using our affiliate links.