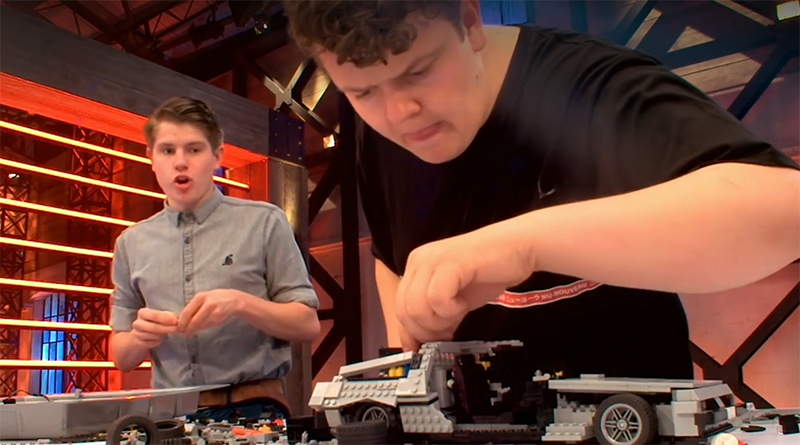 Hamish Blake seems to be having the time of his life as the host of LEGO MASTERS Australia, arriving in the latest episode in a Delorean, wearing a Marty McFly jacket to complete the Back to the Future look. The first challenge, to earn safety from elimination for the winner, requires the builders to put together the most accurate rendition of the car that they can. In the following task, they must replicate a classic movie scene – with the least successful team going home.

One thing that has started to crop up more frequently as the LEGO competition has gone is the importance of following the brief. David and Gerhard decided to add remote control steering to their Delorean, which had a negative impact on the aesthetic and cost them.

There was entertainment value in Kale and Bilsy’s attempt to build a massive scale version of the car, that was in no way possible given the time constraint. Despite all of the evidence to the contrary, Kale insisted throughout that it was possible – but it wasn’t.

Henry and Cade win the Delorean challenge with relative ease, as only Jordan and Miller come close to matching them. With working gull wing doors, decent scale and plenty of detail, Henry and Cade met the brief well. It is a shame that they earned the safety, as it would have been nice to see what they came up with for the classic cinema moment.

In the all-important elimination challenge, each duo had to select a film scene to replicate, with Ryan “Brickman” McNaught instructing them to make it instantly recognisable and capture the magic of the moment.

David and Gerhard did not look to be fully realising the scene initially, with the boat they built seeming quite basic. Once in place though, with added decoration, and the enormous shark attacking it, the scene from jaws really came to life. Not the most emotive characters in the show, they are quiet with their talented and continually impress.

Kale and Bilsy received some criticism during the judging that felt a bit harsh, as the build certainly captured some of the movie magic from the most memorable scene in Titanic. They ran out time though, which led to them having to compromise on the vision.

Despite early warning signs, Jordan and Miller deservedly won the challenge. By building in greyscale to capture the black-and-white classic King Kong, they built at an epic scale, creating an Empire State Building with the giant gorilla standing atop it. There was a wonderful style to the model that was recognised in the judging.

Unfortunately for Jimmy and Maddy, they are up against significantly more talented builders and their luck ran out this time. Like David and Gerhard in the earlier challenge, they believed that adding a motor to the model would somehow impress. What has been clear throughout is that following the brief and following McNaught’s advice is the way to go. Their Exorcist scene was a goof effort, but not close to the standard of the other builds.

With the series getting close to the end, it seems that unless Kale and Bilsy can find their mojo, David and Gerhard or Henry and Cade are the teams to watch. But despite their often-panicked approach, Jordan and Miller keep surprising…