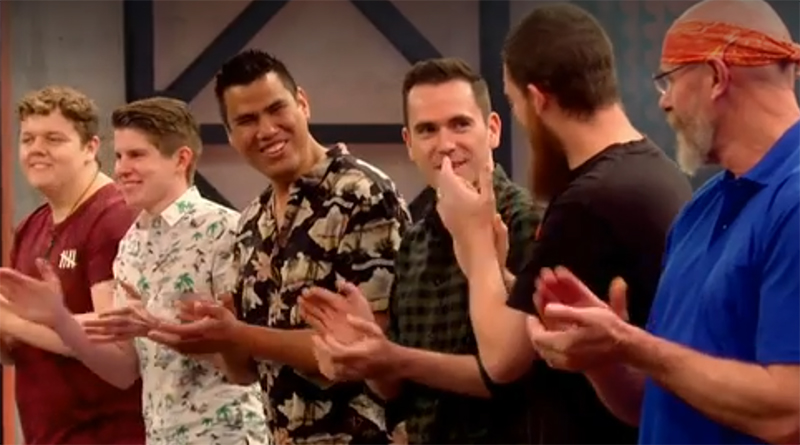 Eight episodes have led up to this, as the final three LEGO MASTERS pairs are given 18 hours to build something impressive. The theme? There isn’t one. This time, the pairs are given the opportunity to really let their imaginations run riot and build anything they can imagine.

LEGO Design Manager Fenella Blaize Charity thankfully is not referred to as Brick Woman when she joins the proceedings to help Brick “Ryan McNaught” Man in the judging for the episode. It is apparent just how much chemistry the regular judge has built up with Hamish Blake that they bounce off each other perfectly, but Fenella brings some genuine Billund credibility to the proceedings.

There are some fun moments when Hamish reminds how important he is as the host, bringing as much needed levity to the tense building experience. The way that he plays with the conventions of television contests and messes with them is great, such as when he offers the builders a huge from a loved one.

As for the building, there is something slightly less interesting now that there are so few teams remaining, but the runtime means that it is probably just the right amount of LEGO brick clocking throughout the episode.

Jordan and Miller come up with a great build, but it is nothing that exceeds what has gone before in the series. During their process they bring a little jeopardy when a vital spacecraft is knocked to the ground and shatters.

When David and Gerhard start building as fairground, it is hard to imagine how it can be any more impressive than the large fairground layouts that are so frequently presented at LEGO shows – yet by the time it is finished, it is. They cleverly use space and the comparative size of the rides to create something that genuinely looks like a bustling environment.

There is no doubt though that Henry and Cade deserve their title of LEGO MASTERS. The other teams’ minifigure scale models are great, but they are not works of art. Henry and Cade do something different than what LEGO builders typically do for a show or a display, they imagine something truly epic.

By incorporating four key elements; Poseidon, the boat, the serpent and the sea, they are able to demonstrate a huge variety of techniques. Their LEGO knowledge is deep as they show by using parts in inventive ways and exceeding expectations of what can be done with the brick.

LEGO MASTERS Australia has shaken up the format, doing something different to the UK edition that launched the reality building contest. It is hard to say that is definitely better, but it is different and seeing adult fans compete has certainly made it unmissable television. Roll on Season 2.