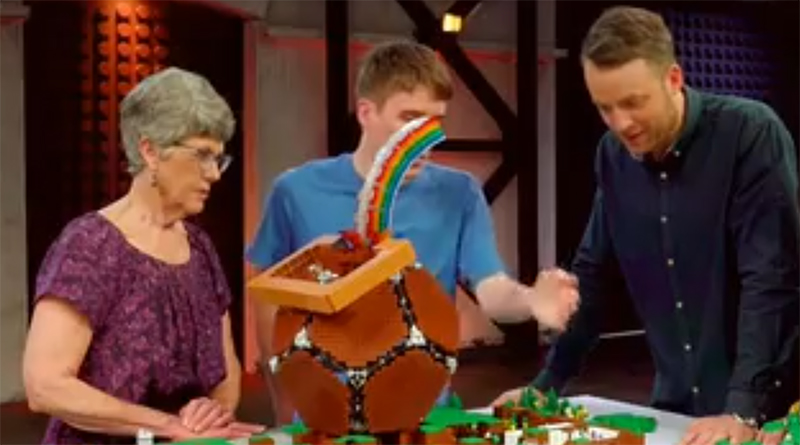 Compared to yesterday’s episode of LEGO MASTERS Australia, this one turns out to be focused entirely on the building. The task, to build a lair for an evil super villain, requires the teams to build something themed to a Collectible Minifigures character who they are imagining is their villain. With little drama, it is a case of watching the builders let their imaginations go wild.

Henry and Cade’s strength in these challenges is that they have decent creative ideas as well as the ability to execute them. They come up with the concept that the Bee Girl is turning minifigures into drones to gather up her honey, which they then clearly depict in their build using clever functions. At the same time, they use colour and shape to make it aesthetically appealing – their finished model really is excellent.

A lot of praise from Brick Ryan Man McNaught goes to Jimmy and Maddy, whose build is extremely well conceived, tying everything together very well – but it is not as technically proficient as some of the other builds. The craft they include is too bulky and blocky to be swooshable, and their building lacks many interesting techniques or angles.

Kale and Bilsy achieve something very nice, with Bilsy continuing to come across as the world’s most patient man. They use the Robot Man’s head to inspire an impressive upscaled build that tops the model and include a rocket inside that pops out when it is opened. A nice touch is that all the altercation between the Police and the bad robots is conducted through the medium of bananas.

As for those who do not quite reach the standard, Jordan and Miller start putting together a sizable building that looks fine, but not like anything special. They incorporate a decent super-weapon for their villainous genie in the shape of a lamp, but that and the magic carpet vehicle are the only two aspects that look really well designed. Jordan seems to make too much work out of building certain parts, when he might have been better advised to just get building them.

It is Matt and Lyn who are going home though, with their very nice looking leprechaun honey pot location not satisfying the judge. The build looks nice, with the rainbow coming out of a giant pot of gold, but it does not quite match the villain’s lair brief. It is a shame to see them ejected, as Matt is clearly an excellent LEGO builder, but something about their builds always feels slightly off. It maybe that as Matt is clearly a bigger builder than Lyn, he needed someone to bounce ideas off to ensure their execution would lead to satisfying finished builds.

Next week it will be the final three episodes of LEGO MASTERS. As this episode illustrated yet again, just watching people build creatively can be far from more entertaining than anyone might otherwise have thought.