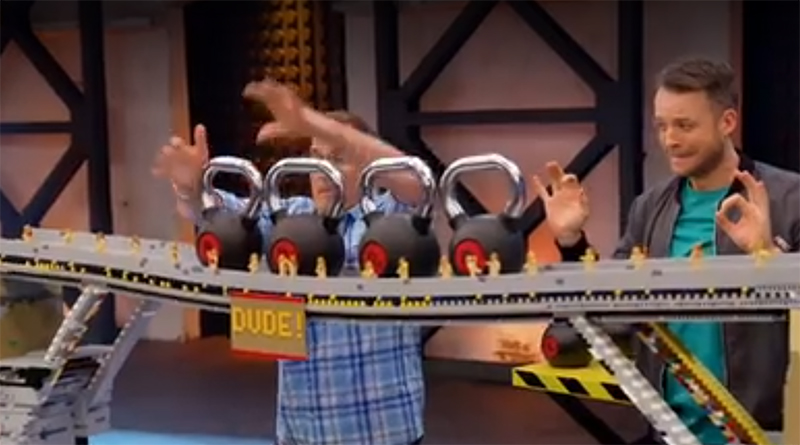 Reviews TV
07/05/201904/02/2020 Graham 611 Views 0 Comments LEGO, LEGO MASTERS, LEGO MASTERS Australia, LMAUSS1, Nine, television
The remaining contenders show their worth by beating the LEGO MASTERS challenge and building the ultimate brick bridges What has delighted the most about LEGO MASTERS Australia is its self-awareness. In this episode, the remaining teams are challenged to build bridges that can withstand a remote-control truck driving over them with 8kg of weight – when the most successful bridges manage to take 88kg of weight, it is clear that the showrunners have underestimated the contestants. Rather than play it down though, Hamish Blake highlights the error and revels in the evolving nature of the challenge. It is a particularly strong episode for the host, with him and judge Ryan McBrick exhibiting really good chemistry at this point, as if they have been working together for years. Someone who does not demonstrate much self-awareness on screen is Kale, who immediately goes back to slighting Bilsy despite the problems his approach caused in the last episode. In the straight -to-camera shots, Bilsy generally allows Kale to keep talking, exposing his ego and rudeness, allowing Bilsy to maintain his dignity. Hamish calls Kale out twice in this episode – when the contestant tells the comic that his bridge is unbreakable, it is promptly broken. When the bridge only holds 24kg, voice over reminds the audience that Kale had promised it would take 120kg. Everyone else approaches the challenge in an earnest way, with Jimmy and Maddy’s determination proving inspiring, as they are racked with self doubt throughout yet manage to build something again that shows their abilities with the LEGO brick. Another endearing duo are the calm and collected Henry and Cade, who also doubt their bridge building prowess yet manage to construct a worthy model. Matt and Lyn also achieve a solid bridge, using a logical technique that has been tied and tested on other projects. While it may look simple, Jordan and Miller pack their bridge with strength which leads to them tying with David and Gerhard tying for first place – each of the two bridges holds a whopping 88kg. David and Gerhard just edge it in the judging thanks to a nice aesthetic that evokes real word bridges and considering the methodical and engineering minded way they approach the task is well-deserved. As always, Gerhard makes himself the builder to root for – when Hamish suggests that he might have smiled, he corrects the show’s host and assures him that it was merely a grimace. His sense of humour will be missed in the next episode, which he and David will sit out thanks to winning the elimination and earning immunity. Read more LEGO MASTERS Australia reviews: Episode 1 Episode 2 Episode 3 Episode 4 Episode 5 Episode 6 Episode 7 Episode 8 Episode 9 To continue to support the work of Brick Fanatics, please buy your LEGO sets from shop.LEGO.com and Amazon using our affiliate links.

END_OF_DOCUMENT_TOKEN_TO_BE_REPLACED

The first LEGO Marvel Eternals set has popped up on LEGO.com – but probably not in . . .