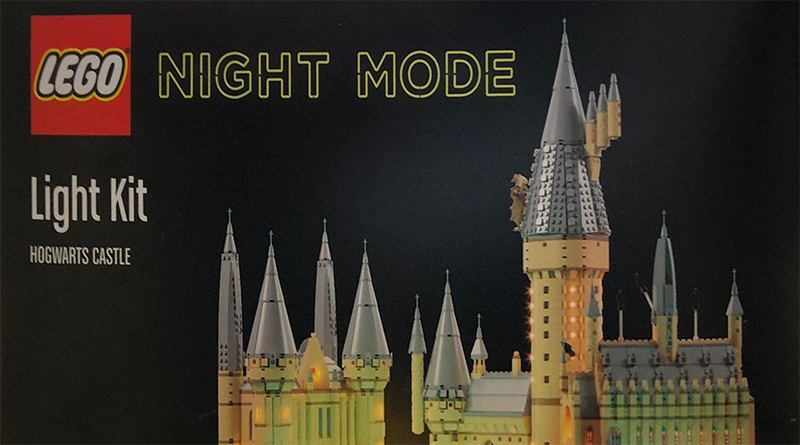 The unveiling of LEGO Night Mode, a new lighting kit product being trialled, has led to concern and questions from the LEGO community.

LEGO Night Mode is a potential new product line from the LEGO Group’s Lead User Lab. The Lead User Lab aims to work with small businesses producing LEGO-related products or services, either absorbing them into the LEGO Group or supporting them as independent companies.

One of the early focuses of the Lead User Lab (LUL) has been lighting kits, with several companies currently selling unofficial bespoke lighting kits for LEGO sets. Rather than send out information about the trial, test boxes were put on display at LEGO World in Copenhagen. It was later explained that the purpose is ‘to do more research and better understand the regular consumer appeal too’.

Those who are on the ground at LEGO World took a look at concept models incorporating the lights and found that the components are from Light My Bricks, a company currently selling lighting kits.

This has led to a lengthy website post from BrickStuff, alleging that Light My Bricks has copied their company’s original designs, something which several LEGO Ambassadors on the LEGO Ambassador Network attest to. Here is a quote from Brickstuff’s piece:

“As any small business owner knows, one of the clearest signs you’ve latched onto something great is when you begin to attract copycats. Indeed, our designs were stolen in 2016 by one of our resellers, and they continue to sell unauthorized copies of our products today. In 2019, another, much larger company in China copied our designs as well, and they have been aggressively marketing on Facebook and other social media platforms.”

It turns out that BrickStuff was considered for the LUL, and has only just been informed that they will not be the LEGO Group’s partners. During conversations with the LUL, the company shared information about the lighting market. Now, BrickStuff claims that this initiative by the LUL works with a company who has copied their company’s designs:

“Based on these photos, we now have confirmation that LEGO has subcontracted directly with one of the companies who have copied our designs, which means the Night Mode sets, in their current form, are based on and include direct copies of technologies and designs we created. When you scroll up [sic] and look again at our original designs, there can be no mistake. True, these are just prototypes, but seeing them inside a LEGO branded box is a very strong endorsement from a company that usually shies away from making endorsements.”

The LEGO Group has offered a response to LEGO Ambassadors who are questioning how this has happened:

“To clarify and hopefully reassure everyone here, those products are a concept test, it’s not something that will go into the market in that current state. We wanted to test if regular consumers find it appealing and used it as a conversation starter to figure out if and how consumers see lights fit as part of the LEGO experience. We spoke about quality, price, building experience, etc. From that to having an actual product in the market there’s still a long path, so it doesn’t mean there’s going to be a product out ‘tomorrow’. Especially on the toy safety compliance there are things that need to be in place beforehand.

“We’ve also been engaging with many lead users that do lights, for finding potential pilot candidates and we had dialogues with quite a lot of them. We continue to evaluate how to best engage in a potential pilot. I want to reassure everyone here that in Lead User Lab we have the very best intentions when it comes to collaborating. We’ll try to have a close dialogue with Rob and solve any potential misunderstandings.

“In the meantime, we’ll continue to evaluate the light product concept testing at LEGO World and to understand how a light kit product could be brought to market in collaboration with a lead user, since that’s what Lead User Lab is all about, finding and trying to scale outside-in ideas.”

While this suggests that the LEGO Group has not decided who the lighting partner will be for the LUL, that begs the question as to why Light My Bricks products were used in prototypes that are supposed to represent what the final product may look like.

The other question raised is that while the LUL may have the ‘very best intentions’, what is being done to see that those intentions are translated into actions? If one company really has copied another company’s designs, as is alleged in this instance, is that a suitable partner for the LEGO Group?

Brick Fanatics has reached out to Light My Bricks for comment.