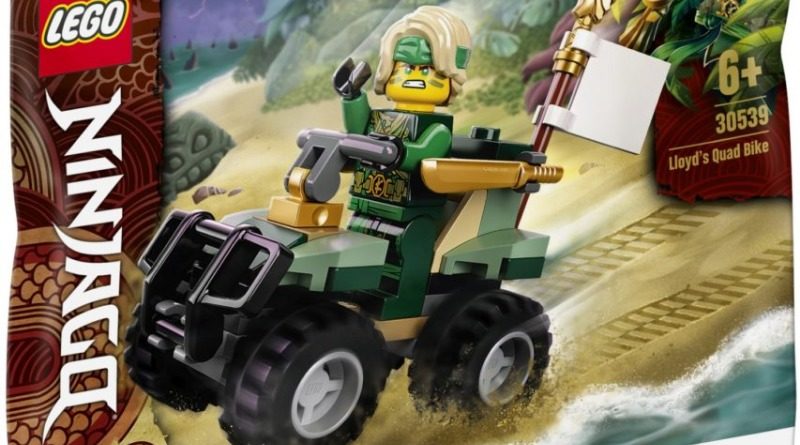 The latest LEGO gift-with-purchase, NINJAGO 30539 Lloyd’s Quad Bike, is now free with qualifying purchases – but only in LEGO Stores.

The Season 14-themed freebie has mysteriously launched two weeks ahead of the rest of NINJAGO’s latest batch of TV show-inspired sets, which are due to arrive on March 1. By that time, the promo will have finished.

That means you’ll need to buy £40 / $40 / €40 of current NINJAGO sets to secure your copy of the polybag, but no matter: there’s plenty available, including a fresh batch of NINJAGO Legacy sets. What’s less readily available, at least in the UK, is access to those stores.

Under current lockdown rules, all LEGO Stores across the UK are closed. That means there’s no way for us to get our hands on 30539 Lloyd’s Quad Bike, unless the LEGO Group sees fit to list the promo online, too. If supplies of the polybag have already been shipped to LEGO Stores, however, that may be easier said than done.

If your local LEGO Store is open, there’s plenty to pick up to secure the free set: 71738 Zane’s Titan Mech Battle is a real standout from the January wave (see our review for the proof), for instance, or you can really treat yourself with 71741 NINJAGO City Gardens.

If neither of those are setting your world on fire, though, here’s the full list of new-for-2021 NINJAGO sets:

This month’s NINJAGO gift-with-purchase will run until February 21, or while stocks last. The theme’s Season 14 sets, including 71746 Jungle Dragon and 71747 The Keepers’ Village, will then launch the very next week. You couldn’t make it up.