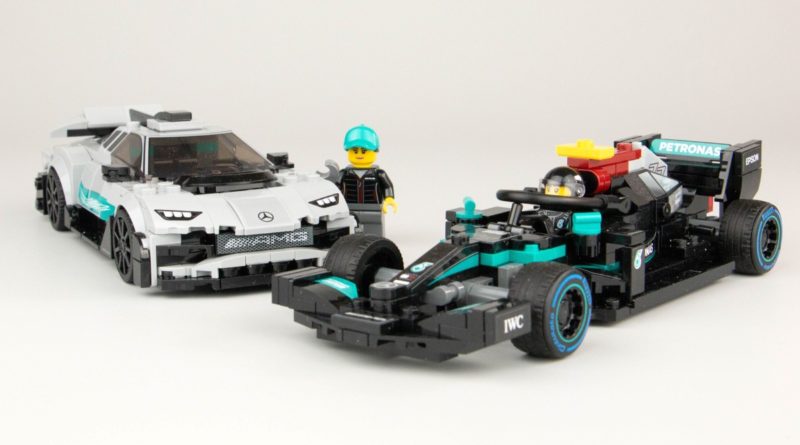 Since its inception in 2015, the Speed Champions family has included many endurance racers, rally cars and exotic road cars, but relatively few examples of what, for many, is the pinnacle of motorsport – the F1 car. This set adds to that number. Here we take a look at a pair of cars that, despite their differing looks, are more closely related than you might think.

The F1 W12 E is the car that was driven by Lewis Hamilton and Valtteri Bottas in 2021. Sitting alongside it is the Project One, 1000hp hypercar, which is effectively an F1 car reskinned for the road. How do their brick-built variants stack up? Let’s take a look…

Starting with the F1 car, we eschew the usual Speed Champions chassis and instead begin with a narrow brick-built spine. The cockpit is a minimalist affair and is set off nicely with a game controller doubling as the multi-functional steering wheel. From there the side pods grow, adorned – unsurprisingly – with a number of stickers, until the beginnings of the rear of the car bring us to the end of bag one.

Working though the second bag, the bodywork takes shape and more stickers are applied. Given the minimalism of the body and the unusual shapes that you’re creating, you often find yourself having to remove parts in order to apply the stickers correctly as it’s difficult, if not impossible, to apply some of them in situ. At this point you have to decide whether to set the car up as Bottas (number 77) or Hamilton (number 44), although spare parts and stickers are provided so that the relevant pieces can be swapped out fairly painlessly.

The model comes together quickly after that and, comparing it with images of the original car, you’d have to say that the designer has done a great job in replicating Lewis and Valtteri’s company car.

We then move on to the Project One. Given that all 275 of the £2m cars have been sold, this is the only way that us mere mortals will ever own one! The early stages of construction will be familiar to anyone who has built a few Speed Champions sets, with the standard chassis piece acting as a foundation. The rear of the car is constructed first, and there are times when the build appears worryingly flimsy, but later steps add reinforcement and gradually a fairly solid, angular-looking car comes to life.

An eye-catching element of the car is the aerodynamic shark fin on the back of the vehicle, and the designer has achieved this by some real out-of-the-box thinking. As you slot the fin into place you can’t help but grin at the way it works. We won’t spoil it for you.

Stickers are a necessary evil of Speed Champions sets, but we must admit to blanching as we reached the end of the first bag and saw 10 stickers being applied as a single step! Those of a nervous disposition (or with shaky hands) are advised to get their LEGO kicks elsewhere.

As we reach the final bag, the bodywork builds and we can’t help thinking of Bruce Wayne’s Tumbler – it feels like you’re building a tank rather than a lightweight, 217mph racing car for the road. There’s some clever parts usage employed, as a pair of wheel arches create the distinctive scalloped bonnet while the headlights are printed on the new 2×3 Outside Bow piece.

Looking at the finished model it’s something of a curate’s egg, which is to say, good in parts. There are the clever build techniques and innovative parts usage that we’ve come to expect from Speed Champions sets, but it has its issues too. Twenty-eight stickers is a huge number to apply (although the F1 car has more, at 33). For us though, the biggest issue is the look.

The Project One is a smooth, sinuous, slippery thing, but unfortunately its LEGO counterpart comes across as a slab-sided brute of a car. Without the stickers, it’s doubtful that many people would be able to work out what it was supposed to be.

The F1 W12 E comes with parts to replicate the cars of both Bottas and Hamilton, but the driver supplied appears to be Joe Minifig Esq. He wears a black racing suit with detailed printing on the front and back of his jacket and the printing continues down his legs. He has a black racing helmet and alternative black hair.

The Project One, meanwhile, comes with a female driver/mechanic. Plain grey legs are topped with a printed black jacket with the AMG logo front and back, and she has the option of a black racing helmet or a blue baseball cap with black ponytail.

At £34.99, or £17.50 for each car and minifigure, this set is good value for money, though maybe not as good as others in the range. We can’t help but feel that the F1 car is the superior model here, but you can only get it by buying this twin pack.

Value will therefore be dependent on how you view the Project One – if you like it, then this is easy to recommend. If you’re less keen on one or other model, then maybe hang on until you can find it on offer. You also have to bear in mind the number of parts that have stickers applied – 62 across the two cars – which limits their use, unless you like building supercars!

We like Speed Champions sets. We like them a lot. Quick builds that usually teach you something you didn’t know about construction techniques, they’re an ideal way to scratch that LEGO itch that we all get without breaking the bank. Over the years they’ve covered a variety of different styles of car and so it’s inevitable that sooner or later you’ll come across one that doesn’t appeal as much as another.

In our case, the Project One didn’t quite hit the mark, while the F1 W12 E most definitely did. It’s frustrating, therefore, that you can’t buy one without the other. As the saying goes, though: “Your mileage may vary.” The One is still a cool looking car and if it floats your boat, or appeals to you as a base for modifying it to your own tastes, well, that’s the joy of LEGO!

You can help Brick Fanatics to keep speeding along by buying your LEGO sets via our affiliate links.

Across the two cars included in 76909 Mercedes-AMG F1 W12 E Performance & Mercedes-AMG Project One it’ll take about two hours to complete the build, bearing in mind those 62 stickers. There are four bags of parts in the box – two for each car.

How many pieces are in LEGO Speed Champions 76909 Mercedes-AMG F1 W12 E Performance & Mercedes-AMG Project One?

There are 654 pieces in 76909 and Mercedes-AMG F1 W12 E Performance & Mercedes-AMG Project One, which covers both cars. The Project One is the first model to use the new 2×3 Outside Bow pieces for its headlights.