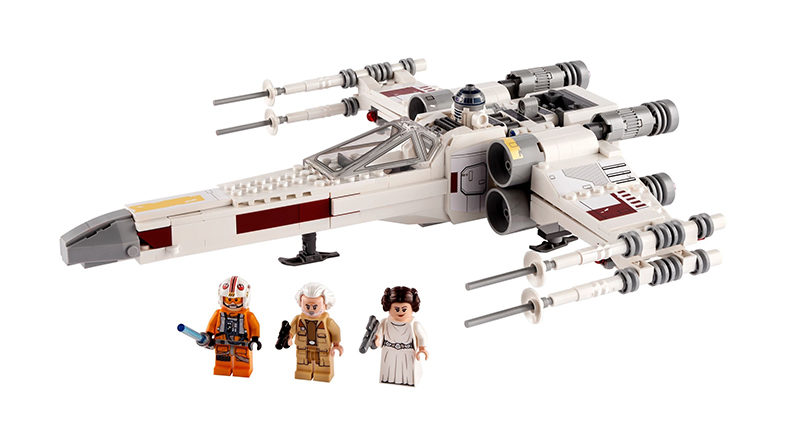 Official images of the new LEGO Star Wars sets launching in January 2021 have been published and the sets listed on LEGO.com.

LEGO.com has revealed three new LEGO Star Wars sets coming in 2021 and has published more images of the previously announced 75299 Trouble on Tatooine. The two iconic fighters of the Rebel Alliance and Empire are represented in 75299 and 75300 Imperial TIE Fighter, while fans have a new chance at a mini Falcon in 75295 Millennium Falcon Microfighter.

The two starships look to be of typical build quality – they are not simplified 4+ sets – but they have been downsized from previous editions, presumably to bring them to shelves at an acceptable pricepoint for parents.

Here are the four new sets;

Children become heroes in their own epic stories with this cool LEGO brick version of Luke Skywalker’s X-wing Fighter (75301) from the classic Star Wars trilogy. It’s packed with authentic details to delight fans, including an opening LEGO minifigure cockpit with space behind for R2-D2, wings that can be switched to attack position at the touch of a button, retractable landing gear and 2 spring-loaded shooters.

Kids can roleplay as the villains from the classic Star Wars trilogy with this cool LEGO brick version of the Imperial TIE Fighter (75300). Capturing the authentic, sleek design of an iconic starfighter in the Imperial fleet, it features an opening LEGO minifigure cockpit and 2 spring-loaded shooters.

There are also 2 LEGO minifigures: a TIE Fighter Pilot with a blaster pistol and Stormtrooper with a blaster, plus an NI-L8 Protocol Droid to inspire fun creative roleplay and storytelling.

Give a young child an unexpected treat with this LEGO Star Wars Millennium Falcon Microfighter (75295). Based on the iconic vehicle’s design in the classic Star Wars trilogy, this awesome brick-built toy has 2 stud shooters and a LEGO minifigure seat. The set also includes a Han Solo LEGO minifigure with his blaster pistol so kids can roleplay as the Rebel hero in their everyday playtime adventures.

There are step-by-step instructions so even LEGO beginners can build independently. This construction model also combines perfectly with the AT-AT vs. Tauntaun Microfighters (75298) set for extra battle action.

Children will love teaming up with The Mandalorian and a Tusken Raider for desert missions with this LEGO Star Wars Trouble on Tatooine set (75299). It features The Mandalorian’s speeder bike with a LEGO minifigure seat and saddlebag for the Child to sit in, plus a buildable Tusken hut and a new-for-January-2021, missile-shooting ballista for the Tusken Raider.

This awesome kids’ building toy includes The Mandalorian and Tusken Raider LEGO minifigures, a LEGO figure of the Child (affectionately known as Baby Yoda), plus cool weapons to inspire hours of roleplay fun. A great gift idea for young Star Wars: The Mandalorian fans, it comes with clear instructions so even LEGO first-timers can enjoy the building experience.