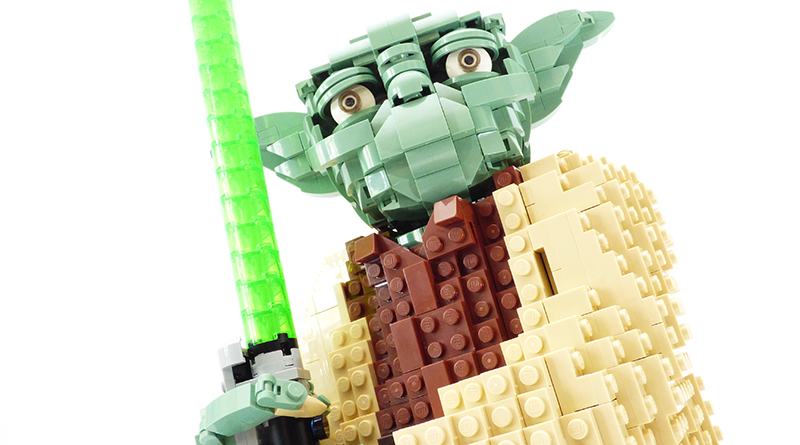 A new statue set for the LEGO Star Wars theme, 75255 Yoda is – do justice to the revered Jedi Master, does it?

“When 1,771 bricks look as good you will not, hmmm?” We’ll be the judge of that, Yoda. This new LEGO Star Wars set, that has launched in advance of the release of Star Wars: The Rise of Skywalker, recreates the wizened Jedi Master inspired by his appearance in the prequels. Coming with a plaque featuring Yoda facts and minifigure, 75255 Yoda is quite different to what collectors are accustomed to.

While sculpture sets have made a comeback in recent years, with 75187 BB-8 (review) the first change from the usual minifigure based releases in a while, the trend has been for them to focus on droids. Droids – even spherical ones – lend themselves well to the angular format of LEGO elements. 75230 Porg demonstrated the possibilities for building organic creatures, with the design team now risking tackling a character as familiar as Yoda. 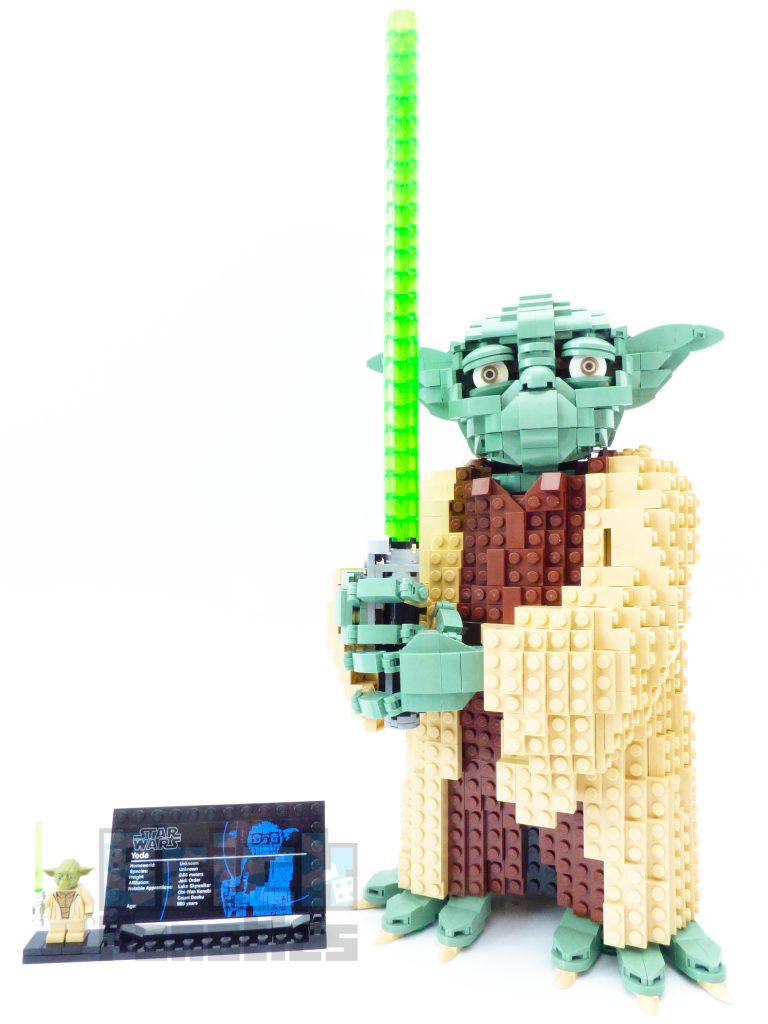 Yoda is an incredibly popular character in the Star Wars saga, beautifully designed for The Empire Strikes Back by Stuart Freeborn and given life by the immensely talented Frank Oz. Back in 2002, the LEGO Group released 7194 Yoda, a statue set that was very much of that era, almost entirely built in the old school bricks-on-bricks way. In 2019, every LEGO set includes multi-directional building, with this model perhaps utilising it more than any other to date. The distinction from its 17-year-old predecessor is striking.

Building Yoda starts off with some rather dull construction, appropriately so as he did preach “patience”. A selection of Technic frame elements are clipped together, with blue pins popped in, providing no secret as to how this build will come together. It looks slightly amusing when a white Technic frame sits atop a pair of Yoda feet, with the bulk of the building still to be done.

What comes next is an enjoyable layering build process – that in some ways, is similar to that of 7194 Yoda. Instead of regular bricks though, it is a case of layering plates and the odd tile to create one of four textured sides that will attach to that simple Technic frame. It is not always clear which way up each side will go until it is complete, but once it is, the way the Jedi’s ‘robe’ falls is very well executed.

Putting the robes together is a reminder of how rarely there is the opportunity to put so many similar pieces together – usually, sets contain a huge variety of elements and require constantly changing build methods. This is a relaxing, enjoyable experience, but requires a lot of concentration – fans sometimes question why designers bury odd coloured bricks inside models; putting together this many sand coloured elements provides many, many opportunities to make mistakes. A careful eye is required so no pieces are missed or misplaced.
An impressive moment is when the final body section is clipped to the frame, as the way the four sections line up looks completely natural – they blend together well.

With the robes complete, building moves onto the head – and many fans who had seen images of the sets were not looking forward to this part. In pictures that leaked before the official announcement of the set, fans saw a bizarre anime influenced stylised head that made 75255 Yoda a rather off-putting model.

Building the head switches things up nicely, as texturing is again carefully used to create a natural looking shape. Thanks to sloped pieces, almost no studs are showing on Yoda’s head, which contrasts it nicely from the robes – it makes it very obvious that his head is organic when contrasted with the fabric robes. The all-important ears are well shaped and in proportion.
One of the biggest concerns that the official images brings up are the eyes – thankfully, these cleverly constructed peepers look absolutely fine in person. Much like 75936 Jurassic Park: T. rex Rampage, this set looks an awful lot better in person than in the official imagery – the LEGO Group needs to start giving their photographers more time to shoot the models. The trick to making Yoda look terrible is too tilt his eyelids inwards, leading to the statue look uncharacteristically angry – to make him look good, tilt the eyelids out – it really does make that much of a difference.

There is one other aspect to the face that is slightly odd – the three wide slope element beneath his eyes should perhaps only be two studs wide – which is better will be down to personal preference, but fans should definitely try swapping the element out and see if the slightly less sharp cheeks suit the character better.

The final part of the character build is the hands, which are well done and scaled nicely for the model and are followed by the lightsaber. The articulated fingers on the hands curl around the lightsaber handle nicely.

Something about the lightsaber seems off, with it feeling a bit too long when held by Yoda. It seems to pull focus away from an otherwise impressive model. Whether it is a movie accurate length is hard to ascertain, as the special effects wizards of Attack of the Clones and Revenge of the Sith were quite liberal with how long Yoda’s laser sword needed to be at any given moment.

What is more frustrating is that Yoda’s hand are built to be static – the left one can be turned 90 degrees by removing, turning and clipping it back in, but the right hand cannot turn at all. It really is a shame, as this would have been a relatively easy thing to fix and would have allowed for the figure to be displayed without the lightsaber. As it stands, those who would prefer to remove the lightsaber are left with Yoda’s hands in an odd position.

“Looking? Built someone you have I would say, hmmm?” Once the Yoda model is built, the facts sticker is applied to the plate that is part of a little accompanying plaque. It is typical of these statues and is associated with the Ultimate Collector Series sets, displaying a non-exclusive Yoda minifigure.

Despite the picture on the box, 75255 Yoda really is an impressive model, falling short of excellence. Had the hands been posable like the head, with perhaps his cane included as an alternate accessory to the lightsaber, this model would have been a must-buy. As it is, this accurate rendition of the character, as he appears in the prequel trilogy, is well worth picking up but may require a few special modifications. 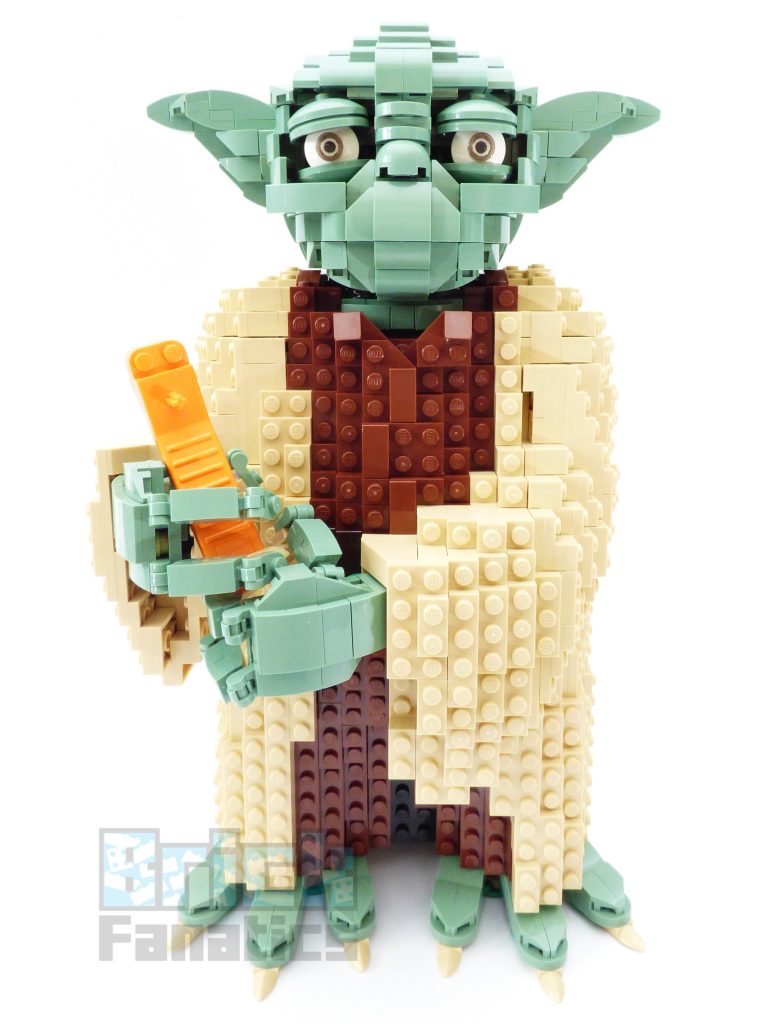