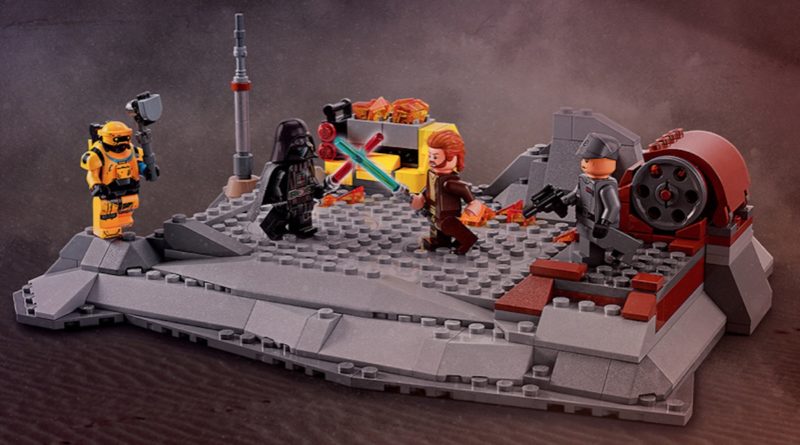 A third set based around the hit Disney+ Star Wars show has been announced with 75334 Obi-Wan Kenobi vs. Darth Vader.

The set features a simple brick-built diorama scene and is based on the events in episode three of Star Wars: Obi-Wan Kenobi. The conclusion of that episode was an epic (and fiery) lightsaber battle between the Jedi Master and his former student, Anakin Skywalker, on the mining planet of Mapuzo, which is recreated with this set.

75334 Obi-Wan Kenobi vs. Darth Vader includes multiple play features such as two rotating battle platforms to simulate lightsaber duels, battlefield-splitting fire pop-up function, a translucent stand for Force-jumps and a mining cart that can be flipped over.

The set also includes a total of four all-new exclusive minifigures (with accessories) in the shape of Obi-Wan Kenobi, Darth Vader, NED-B and Tala Durith. The Obi-Wan Kenobi minifigure is different from the one included with 75336 Inquisitor Transport Scythe, reflecting the character’s appearance in episode three of the show.

The Darth Vader minifigure seems to have the same arm printing as the minifigure included with 75296 Darth Vader Meditation Chamber and there doesn’t appear to be any sign of the speculated helmet with red lenses. NED-B and Tala Durith made their screen debuts in episode three of Star Wars: Obi-Wan Kenobi and the set also marks their first appearance in minifigure form.