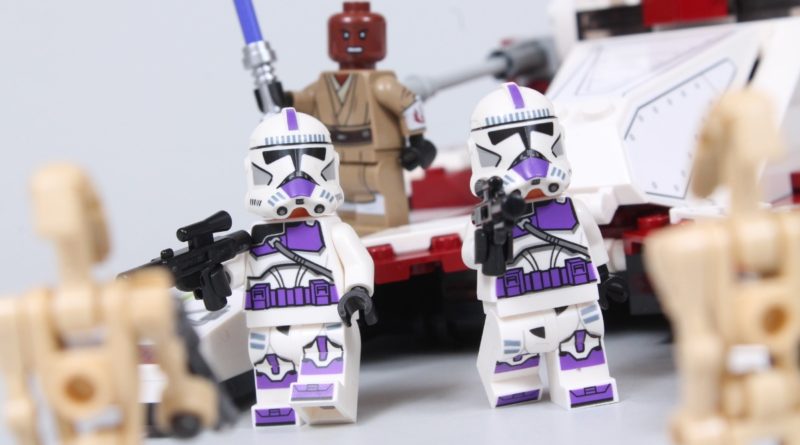 From its purple troopers to its surprisingly impressive build, 75342 Republic Fighter Tank is the LEGO Star Wars set you never knew you needed.

Initially rumoured all the way back in September 2021, the first reports of 75342 Republic Fighter Tank were largely dismissed out of hand for being a little beyond belief. A third go at one of the more obscure vehicles in the LEGO Star Wars line-up? Three non-canon Clone Troopers? No chance, we all scoffed. But here we are, seven months later, the community eating its collective words.

Between 7915 Imperial V-wing Starfighter, 75087 Anakin’s Custom Jedi Starfighter and 75204 Sandspeeder, though, the LEGO Star Wars theme has never been afraid to head off the beaten path. And – happily – 75342 Republic Fighter Tank arguably represents the best of what those off-kilter sets have to offer within the wider scope of a galaxy far, far away.

The LEGO Group’s third take on a vehicle we’ve only ever seen in video games – we’re as surprised as you – also represents its third different scale, sitting somewhere in the middle of the last two. And by and large, that makes it not too big, not too small, but basically just right – at least as an adaptation of the TX-130 as seen in EA’s original Battlefront games from the early ‘00s, rather than the more modern version from the late ‘10s. You know, just in case this source material wasn’t niche enough for you.

That means it’s taller and beefier than the 2017 version, 75182 Republic Fighter Tank, though not quite as overwhelmingly massive as 2008’s 7679 Republic Fighter Tank (to some relief). And it takes a novel (if slightly simplistic) approach to achieving that size, sealing – although not entirely, for there is a frustrating gap – a pair of huge slope pieces with a reversed, opaque and stickered X-wing fighter cockpit, which is a surprisingly good fit for the tank’s weirdly-shaped ‘nose’ section.

Aligning the decals along it also isn’t quite as tricky as you might imagine (their white background helps), and they do a lot of heavy lifting in communicating detail not afforded by the single-piece solution. Less detailed are the blank white slopes, a point of contention in initial reactions to 75342 Republic Fighter Tank among the community, but in practice they’re mostly hidden by the rotating side cannons anyway.

The set otherwise does a pretty good job of capturing the general shape of its source material, even if it does take a mostly toyetic approach to it: while one of the three Clone Troopers can sit in the main hatch, another hides strangely behind the nose, and the third (whichever one draws the short straw, presumably) just gets to lie down in the back, ready to worm his way out into battle. They’ll never see it coming.

Deploying the tank’s crew isn’t a terribly straightforward sequence then, but the wheels carefully and subtly built into its base – they could easily have been eyesores – allow the tank to ‘hover’ across any surface you choose, and between its copious slopes and slightly-less-copious stickers it absolutely looks the part. The build’s over almost as quickly as you start, but for a vehicle that we were shocked to see get even a second set in 2017, it still feels fresh the third time around.

By the time December 2022 rolls around, and we’re thinking about how to celebrate the year just gone (in LEGO), remind us to put together a list on ‘the most random and unexpected minifigure line-ups’. It’s a niche category, for sure, but one that 75342 Republic Fighter Tank is likely to top.

Here’s another Mace Windu – a character we’ve already documented the LEGO Group’s weird relationship with – only with printed arms (so, better than the one in that £320 UCS set you bought last year, bizarrely); three Clone Troopers seemingly based on a Hasbro action figure pack from 2007 (er, what?); and – somewhat less randomly – two Battle Droids, because we always need more of those.

What we actually need more of is Super Battle Droids (they haven’t been in a LEGO set since 2015!), but we’ll take these for the easy, throwaway addition that they are. Mainly because the star attraction is obviously the Clone Troopers, and they go a long way to filling out the Republic’s rainbow army – Star Wars is inherently silly, remember – with detailed printing from head to (literal) toes.

Except for the mid-section of their boots, of course, which would cover that bit of minifigure legs that can seemingly never be printed on. Dual-moulded white and purple legs would have improved these characters massively (even if at a cost) – as is, their toe printing looks a bit naff, like they’re wearing little tap-dancing shoes. Still, beggars can’t be choosers. Who ever thought we’d get purple clones?

If ever there was a LEGO Star Wars set that illustrated just how difficult it is to truly gauge the theme’s pricing structure, it must be 75342 Republic Fighter Tank. It comes in at £10 / $10 / €10 more expensive than 75280 501st Legion Clone Troopers, a set that includes the same number of minifigures (down to the droids) and 18 more pieces, and is arguably its closest contemporary.

But at the same time, it’s equivalent in RRP to 75283 Armored Assault Tank (AAT), which also includes a Jedi and two Battle Droids, but only one Clone Trooper (and just 24 more bricks). For the size of its build, 75342 Republic Fighter Tank is actually closer to its Separatist counterpart than 2020’s supersized battle pack, and that’s a very favourable comparison where the minifigure line-up is concerned.

Taken in isolation, though, does this set feel like it’s worth the dosh? On the whole, yes: it’s a pretty beefy (if brief) build, and there can really be no complaints about those minifigures. The larger elements probably have something to do with it, too…

Did we need another one of these video game curios? Hard to say. Maybe 75342 Republic Fighter Tank is the epitome of something we never knew we needed, right down to its bizarre (but just a little bit glorious) purple Clone Troopers. Nobody asked for those – nobody could have, surely, given they’re about as obscure as Star Wars lore gets – but you already know you need to get them somehow.

What you really want to know from this review is whether the rest of 75342 Republic Fighter Tank is worth a slice of your LEGO budget, and the answer is satisfying straightforward: yes, almost certainly. It’s not the biggest Republic Fighter Tank, nor the prettiest, but it bests both its predecessors in at least one department, and for that it shouldn’t be overlooked – at least if only to see how the LEGO Group has managed to come up with a third completely different way to build this vehicle.

How long does it take to build LEGO Star Wars 75342 Republic Fighter Tank?

The size of 75342 Republic Fighter Tank belies the speed with which it comes together: you’ll spend roughly 30 minutes assembling this LEGO Star Wars set.

How many pieces are in LEGO Star Wars 75342 Republic Fighter Tank?

75342 Republic Fighter Tank comes in at 10cm tall, 20cm long and 16cm wide, which places it between both two previous versions in scale and size. It’s probably the most appropriately-sized iteration to date, though.

How much does LEGO Star Wars 75342 Republic Fighter Tank cost?