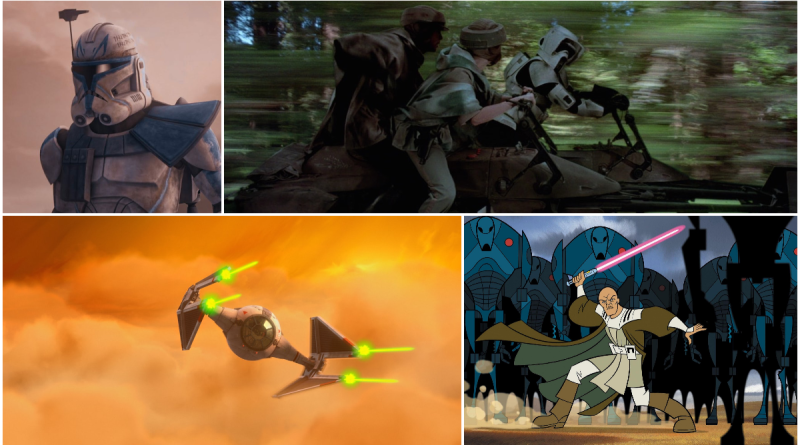 More details are beginning to emerge around next year’s rumoured LEGO Star Wars line-up, and it sounds like we’re in for a weird and wild 2023 from a galaxy far, far away.

Let it never be said that LEGO Star Wars is at risk of going stale: for every big, grey ship, we’ve got a diorama, a buildable helmet or a small, grey slab to inject some variety into the portfolio. And in 2023, it looks like the design team will continue taking the theme to strange, new places – at least if the latest rumours are to be believed.

Next year marks two major anniversaries for the Star Wars franchise: it’s the 40th anniversary of Return of the Jedi, and it’s 20 years since Genndy Tartakovsky’s experimental and stylised Star Wars: Clone Wars series first debuted on screens. Okay, maybe that’s just one major anniversary and one slightly niche anniversary, especially because the animated show has been superseded by 2008’s The Clone Wars and is no longer canon.

But far be it from the LEGO Group to let an anniversary of any kind pass by unnoticed – and so, next year’s LEGO Star Wars sets will reportedly carry branding marking the 20th anniversary of Clone Wars. Or at least one will, anyway, in 75353 501st Battle Pack – a set that surely has nothing at all to do with the series, because the 501st Legion was still just a real-world non-profit organisation in 2003. (It wouldn’t become canon until the year after, in a Timothy Zahn novel.)

The LEGO Group has only acknowledged that series once before, in 2015’s 75087 Anakin’s Custom Jedi Starfighter, a set that felt as out of left field then as a celebration of the show would now. We’re not complaining – more diverse subject matter across LEGO Star Wars can only be a good thing, really – but we will be very surprised if this rumour is true. And that’s partly because of how the LEGO Group almost completely overlooked an arguably much more important anniversary in 2022.

We’re obviously talking about Attack of the Clones, the middle prequel movie, which originally hit screens in 2002. Only two LEGO Star Wars sets based on Episode II arrived on shelves this year, in 40558 Clone Trooper Command Station and 75333 Obi-Wan Kenobi’s Jedi Starfighter, and there was no branding of any sort to suggest they were intended as anniversary products.

There’s also the question, though, of whether it really will be celebrating 20 years since the original Clone Wars series premiered – or whether it’s just using the branding supplied by Disney. A 501st battle pack would obviously not be based on the series (it’s instead thought to be inspired by EA’s Star Wars: Battlefront II), so it remains to be seen whether any LEGO Star Wars 2023 sets will actually match the style, characters and vehicles seen in the 2003 show.

Any tribute to Clone Wars would only be part of the picture for 2023, of course – and even beyond that branding, the rumoured line-up of LEGO Star Wars sets sounds wild and weird in all the best ways. Across a theme that will be heading into its 24th year, only one and a half of its sets are currently thought to be direct remakes of ships we’ve seen before, while everything else is basically brand new.

What’s more, those two mooted redesigns are a TIE Bomber and a TIE Interceptor, vehicles we haven’t seen in bricks at minifigure scale since 2003 and 2006 respectively, so they’re long overdue. The rest of the list is comprised of new vehicles, or fresh takes on familiar subject matter in new scales and styles. This would be our first Slave I Microfighter, for example (that completely inaccessible SDCC version doesn’t count), while Jabba’s Palace, the Death Star Throne Room and the forest moon of Endor could all look very different through a diorama lens.

The LEGO Star Wars Helmet Collection, meanwhile, will allegedly be breaking new ground by adapting prequel trilogy characters with Captain Rex and Commander Cody, both of whom could potentially also feature the Clone Wars 20th anniversary branding. (They’d be just as fitting as the 501st battle pack, which is to say not at all.)

There are currently three gaps in the list below – not counting what’s expected to be the next Ultimate Collector Series set – with at least one of those, 75351, likely to be a third helmet of some kind. That leaves just 75364 and 75356, either of which could feasibly be a set actually inspired by 2003’s Star Wars: Clone Wars. And among a line-up of LEGO Star Wars sets that will seemingly breathe new life into the theme once again, that would genuinely be the cherry on the cake.

All these sets are still just rumours for now, of course, so take them with a pinch of salt until the LEGO Group comes through with official confirmation either way. But with 2023 rapidly approaching (hey, it’s November already – when did that happen?!), we presumably won’t have too long to wait to find out what next year has in store for us.