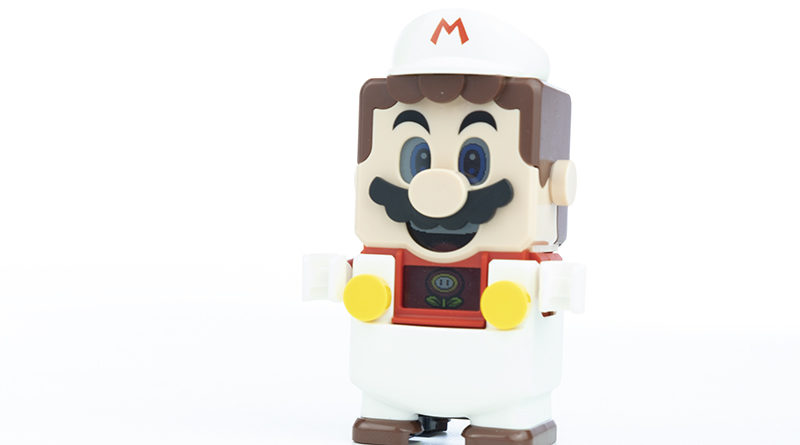 One of four Power-Up Packs in the LEGO Super Mario theme, 71373 Builder Mario Power-Up Pack provides the interactive figure with white overalls and hat as well as the ability to shoot invisible fireballs at his enemies.

For the Power-Up Pack to be of any use, fans need to first purchase 71360 Adventures with Mario Starter Course (review), which contains the Mario figure.

There’s definitely some legacy behind 71370 Fire Mario Power-Up Pack, with this outfit first having appeared in Super Mario Bros. The white overalls match how the characters have sometimes been presented, but their fire modes often feature red outfits. That said, the white is a nice change from the regular Mario costume.

In this Power-Up pack, Mario’s ability is showing fireballs. They are invisible of course, leaving their form to the imagination (in fact, the amount of imagination required begs the question of whether the digital component was every necessary). By tilting Mario towards his enemy however many times is necessary, then leaping on their backs, he defeats them.

When some of the products were announced and that Fire Mario can defeat enemies by shooting them was announced, it piqued the curiosity of fans – how would Mario know he was shooting them? What clever way will this work? Given that he has to jump on them at the end to recognise them, it’s less advance than would be expected.

That said, this is still one of the best Power-Up Packs along with 71372 Cat Mario Power-Up Pack. It actually offers something new and slightly engaging. It isn’t necessarily a set that gets a full recommendation, but if the concept of defeating enemies in a slightly different way sounds appealing then may be worth picking up.

71370 Fire Mario Power-Up Pack offers a slight change of pace for Mario and looks great – but the Power-Up packs are probably not the most exciting products in this theme.

71370 Fire Mario Power-Up Pack will be available from August 1 at LEGO.com. You can help support Brick Fanatics’ work by using our affiliate links.