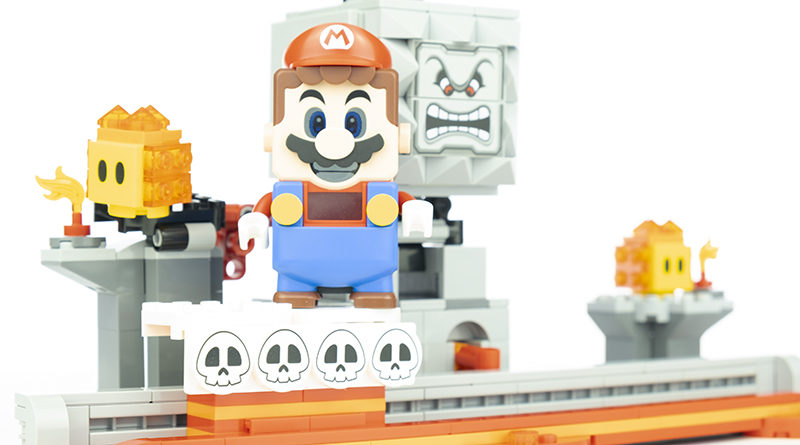 LEGO Super Mario offers a broad range of sets inspired by the beloved video games, with 71376 Thwomp Drop Expansion Set moving away from the greens and blues of 71360 Adventures with Mario Starter Course (review), instead focusing on the red and greys that come with tougher and more intimidating levels. A familiar Thwomp from the Mushroom Kingdom forms the basis of the set, with two Lava Bubbles also included.

As with every set in the LEGO Super Mario theme, 71360 Adventures with Mario Starter Course is required to build and play with this set as it contains the required interactive Mario figure.

The sets in this theme are made up of special platform pieces connected by two stud wide plates. This particular model is unusual though, as it is made up on one large section with few customisation options. Two towers are built first for the Lava Bubbles, one of which can be moved around a layout, the other integral to the functionality of the build.

Next the main track is built, which is quick and simple. This will allow Mario to travel back and forth on a platform, racking up coins as long as he can avoid his enemies.

Something that the LEGO designers have been doing impressive work with is designing functions that are not overengineered. In the case of this set, the central function is ingeniously simple – a very long Technic axle runs all the way up the central column, connected to a small Technic segment at the bottom that protrudes over the track below. When Mario slides past on the platform and hits it, another segment at the top is turned sideways, allowing the Thwomp to drop. It drops s small amount before the second and final drop sends it all the way to the bottom, hitting another Technic element that triggers a Lava Bubble to fall towards Mario.

The finished set looks neat, and while these Super Mario sets are generally not the most displayable in the LEGO range, it is hard not to want to play with a tower so tall. That gameplay offers two difficulty levels, with the platform offering a studded side and a smooth side, giving fans the choice of how much they challenge themselves.

Even placing Mario on the smooth side, it’s not too challenging a game – the Thwomp is triggered by sliding past it, so players will have to make some effort to have it actually hit Mario. Avoiding the Lava Bubble it triggers is slightly trickier, but it doesn’t always knock him off the platform anyway.

Once the Thwomp falls, Mario can jump on top of it five times to defeat it, which will net him 10 coins. As with most small enemies, the Lava Bubbles are worth one coin each and are defeated in the usual way.

The printed pieces in this set are great, with the Thwomp’s design feeling as if it has jumped straight from the screen. Lava Bubbles look adorably blank as do the Toad faces, with simple little snot builds capturing their shape well.

Thwomps have a particular way of attacking Mario in the games, with them dropping down on the hero in their original Super Mario Bros. 3 appearance and pretty much ever since. That the LEGO design team has managed to recreate that feel in this set is impressive and those who are buying into this theme will find something unique in this set. As ever though, the big question mark is over whether this offers the same level of play and display that a £34.99 LEGO set does.

71376 Thwomp Drop Expansion Set will be available from August 1 at LEGO.com. You can help support Brick Fanatics’ work by using our affiliate links. 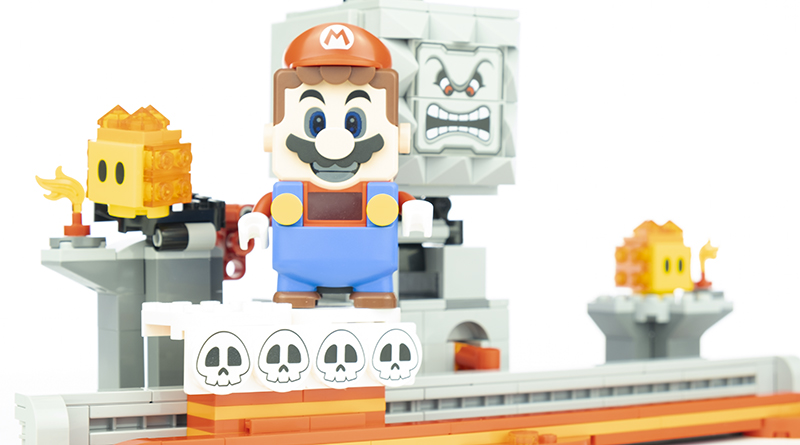