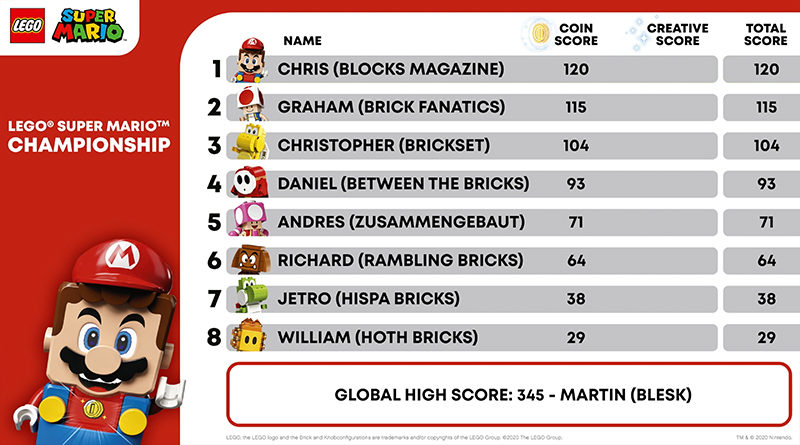 Lockdown haircuts, outrageous decisions and grown men playing with toys – it can only be the LEGO Super Mario Championship. Brick Fanatics Editor Graham Hancock recounts the experience – he’s not bitter…

As Editor of Brick Fanatics, I was invited by the LEGO Group and Nintendo to take part in the LEGO Super Mario Championship. It’s a virtual contest, held for the first year this year, and is just as prestigious as any other tournament, no matter what anyone tells you.

I was competing against fellow LEGO afficiandos, including Chris Wharfe – who provides news coverage here when I’m away – and is the Editor of Blocks magazine. Other rivals for the coveted trophy included Daniel Mulholland of Between the Bricks, Chris Pearce of Brickset and Jetro de Château of Hispabricks.

Unconvinced that my abilities with LEGO Super Mario were up to scratch, I went in with low expectations. My spirits were lifted though when LEGO MASTERS host Melvin Odoom popped up on screen, bringing his usual energy to the proceedings. He was joined by LEGO Design Manager Jonathan Bennink, who set the challenges.

The first challenge was to use a level that we had built in advance using a selection of sets to see how many points we could score. We were primed in advance, with information sent out advising everyone to build the best points-scoring level they could.

Incredibly, I managed to score 115 points. I was shocked, as the track I had cobbled together from the various sets had only been giving me around 90 coins when I had tried it out. As the first person to reveal their score, I had no clue how it related to anyone else’s. Chris Wharfe revealed his right after I did though, and had me beat by five points. There was something especially galling about him being ahead of me by such a small amount.

I was amazed that we wound up top of the leaderboard, very surprised and pleased to be in second place – and even pleased for Chris to be in the top spot.

The next challenge required us to use the 71365 Piranha Plant Power Slide Expansion Set (review) to see how many points we could rack up. Chris scored an impressive 60, putting him top of the pack again, while I ended up with 51 points. We had retained our first and second place positions.

But after a Q&A with Jonathan, something shocking happened. Score multipliers were applied. It turned out that select builds would be given a multiplier of 1.5, 2 or 2.5 times based on creativity. I am not bitter, it doesn’t matter, it’s just a bit of fun – but that wasn’t mentioned anywhere in the advance materials.

So despite no warning that level design would be judged on aesthetics (it’s just a bit of fun), Jonathan went wild, handing out score multipliers to whoever he deemed to have built an attractive level. Jetro’s points were boosted by 50%, Daniel’s points were doubled and Chris Pearce’s went up by 150%.

As the leaderboard shows, this changed things somewhat:

It was great to take part and it is so nice to have a bit of fun, which ultimately is what it was, even if the ‘rules’ mean I was robbed of my rightful second place. I’ll just have to cling to that speed build victory I had a few years ago. I’m not bitter.

Subscribe to Between the Bricks for more fun LEGO videos.