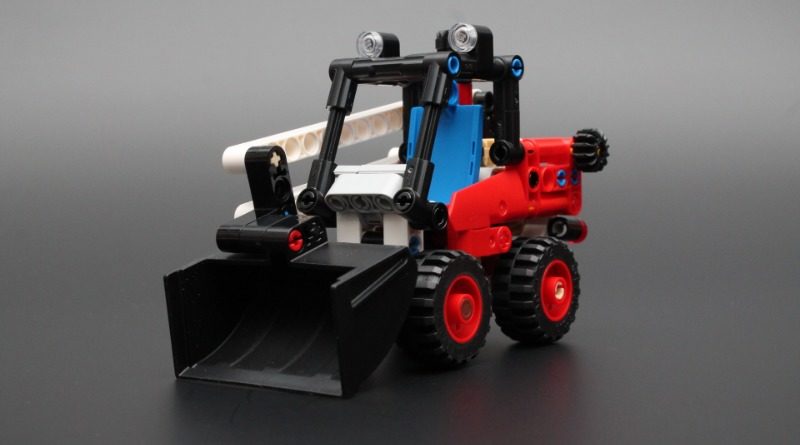 42116 Skid Steer Loader offers a cheap and satisfying entry point into LEGO Technic, with plenty of functions for the price.

While the first thing that might come to mind when thinking of Technic sets are huge models with part counts in the thousands, packing in loads of functionality, the LEGO Group also brings us tiny models that still manage to impress in spite of their size. 42116 Skid Steer Loader looks to continue that trend, fitting all the functionality of the real thing into a mini model with just 140 parts.

There are few surprises with the build, which goes exactly as you might expect for a small Technic set. It begins with assembling a sturdy base and the driver’s seat, using large angled beams and an angled blue panel for the seat.

The most interesting part of the build is the compact worm gear mechanism that sits in the back and raises the bucket when complete. It’s not going to win any accolades for innovation, but it’s neatly executed and will teach those new to Technic some useful tricks. The build wraps up with the frame for the cab and the addition of the bucket.

The completed model looks excellent for the scale and is easily recognisable as a skid steer loader. The choice to use just a single lifting arm for the bucket, rather than two either side of the cab (which is more common in this type of vehicle) works well here, giving it a cleaner look. A very welcome touch is the use of rare black bushings on the cab frame, rather than the usual grey, which would have stood out rather obnoxiously.

For such a small set, 42116 Skid Steer Loader manages to fit in all the functionality you might expect from a larger model of the same vehicle. This does mean just raising and tipping the bucket, but then again that’s probably why these vehicles make such good subjects for smaller Technic sets.

Both functions work fairly well, but aren’t without issue. Because the lifting arm passes so close to the cab, if the frame isn’t perfectly lined up, it can snag when being lowered. Tipping also has its issues; this is a simple lever linkage, but the slack in the worm gear system means you can inadvertently raise or lower the bucket while trying to tip it.

This is a Technic set, and therefore doesn’t have minifigures. Nothing to see here.

Overall, this is a fun little model with some satisfying touches that will have a lot of appeal for those looking for an introduction to Technic. While it might not offer anything new to veterans of the theme, it’s still got enough going on at a low cost to make it worth checking out.

42116 Skid Steer Loader launches on January 1, 2021. You can support the work of Brick Fanatics by ordering your copy using any one of our affiliate links.