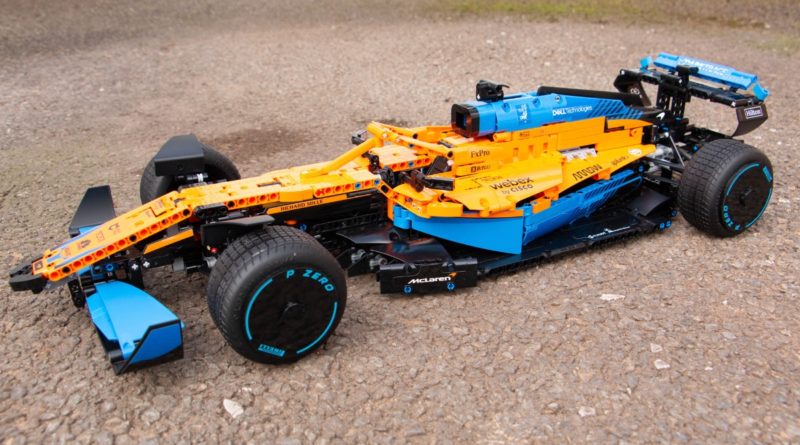 The wizards of Woking have created an astonishing F1 car with a budget of $145m, but you can build one for considerably less in LEGO Technic 42141 McLaren Formula 1 Race Car.

Formula 1 is something of a divisive sport. There are those who are gripped by the on-track action (to say nothing of the off-track politics), while others take the view that any sport where the outcome can be dictated by team orders rather than the skill of the participants isn’t really a sport at all.

Whatever your opinion, there are a few things that can’t be disputed: that the drivers have enormous courage and ability; that it takes an enormous team to put an individual on the podium; and that the cars themselves – for many, the stars of the show – are at the bleeding edge of technological development.

Rule changes in the sport mean that many teams have been heavily revising their cars this year or, indeed, starting with a clean sheet, and that includes McLaren. However, while the engineers at Woking were working on the 2022 car, they had Lars Krogh Jensen, LEGO Technic designer, peering over their shoulders – and as the car took shape in Surrey, over in Billund, a second car was being created.

Unveiled in the same week, the 2022 McLaren MCL36 and 42141 Technic McLaren Formula 1 Race Car both look astonishing. You can read our comparison of the two here, but for now, what’s the LEGO version like to build…?

Opening the instruction booklet, there are a few pages of images, plus quotes from Andreas Seidl, the Team Principal at McLaren F1, and Lars Krogh Jensen, the LEGO designer tasked with recreating the car in LEGO Technic. Niceties over, it’s on with the build.

Anyone who’s driven a modern car knows how bloated they’ve become. Small cars have become large and large cars have become enormous. An F1 car, however, consists simply of that which is absolutely necessary and nothing more. It’s motoring at its purest. So we start with the front suspension, then move on to the V6 engine and begin to construct the chassis.

After a few hours you’ve added the rear suspension, put the sections together and you sit back to admire what you’ve created. And if you’re anything like us, you might consider stopping there and putting the set on display. This is no toy – this is scarcely a model. This is engineering in plastic. The double-wishbones aren’t merely a facsimile of a real-life set up; this is how they actually work.

The springs are inboard, horizontal and already under a lot of compression, which means that the suspension is incredibly stiff – the finished model can be pushed down, but it barely moves more than a few millimetres. Okay, the engine probably has rather fewer components than the actual V6, but as the car moves you can still watch the pistons pumping.

For a set of this size – the finished car is two feet long – there are relatively few traditional Technic functions. There’s no gearbox, for example, whereas in a set like 42115 Lamborghini Sián FKP 37, building the gearbox could take a couple of hours by itself. Functionality is restricted to working steering, suspension, the engine pistons, a differential, and… that’s about it. Some may argue that as a Technic set, and one that commands a premium price, it should have had more.

But chances are you simply won’t care. Even at this stage you can tell that this set is something special.

Once the minimalist chassis is complete, work on the body begins. This must have been a headache for Jensen, as looking at the MCL36, it doesn’t seem to have a straight line on it anywhere – it appears to be a fluid that’s been frozen. An odd fluid, admittedly. We probably wouldn’t drink anything that was ‘Fluro Papaya and New Blue’ (unless it’s on the packaging), but it’s a striking colour combination all the same.

Slowly it comes together, and as it does, out come the sticker sheets. All three of them. There are 66 stickers in total, from tiny silver rectangles that mimic the wing mirrors, to huge items that have to line up with their neighbours. And don’t get us started on the four circular stickers that put the Pirelli P-Zero logos on to the aerodynamic wheel covers – we’re still waking up with palpitations.

The other thing that gives us nightmares is the steering wheel. The steering uses a 12-toothed gearwheel and a 7M Rack, and if you don’t ensure that the rack is centred at all times as you’re constructing the front end, you’ll find, as we did, that when the steering wheel goes on, it’s not level when the front wheels are facing forward.

We briefly considered a major deconstruction/reconstruction effort, but decided in the end to just pretend that it hadn’t happened. Feel free to learn from our mistakes!

The end result is a minimalist thing of beauty. As a build it’s challenging but rarely frustrating. and you’ll often find yourself sitting back and admiring (or just scratching your head at) the way it comes together. Huge sections of bodywork seem to shrink as they attach to the main structure, leaving you to wonder just where those 1,400+ parts actually went.

This isn’t a build to be rushed. It’s one to be savoured.

There are no minifigures in this set. There is an incredible F1 car though, so don’t feel hard done by.

More and more frequently we look at Technic sets – indeed, LEGO sets in general – and can’t help but wince a little at the price. In contrast, though, at £159.99, 42141 McLaren Formula 1 Race Car seems like an absolute steal. Without wishing to give the LEGO Group ideas, this could easily have been a £180 set and there wouldn’t have been many complaints.

Unlike cranes or bulldozers, the LEGO Technic open-wheel racing car is something of a rare beast. There have only been seven in the past 28 years, and it’s been nine years since the last of them – 42000 Grand Prix Racer – appeared. But looking at 42141 McLaren Formula 1 Race Car, it’s as though the Technic team have been making them every day for years.

It’s not to say that it’s the perfect set. Critics will point to the differences in livery, the angles where there should be curves, the lack of a working gearbox and other functionality. We accept that and yet, somehow, it doesn’t matter. What Jensen has created here is a model of a cutting-edge racing car, distilled down to its very essence. Once you’ve built it, you won’t need to go and press down on the wing to know just how well the suspension works. You won’t feel the need to fiddle with the underbody diffusers.

It’s enough to admire it for what it is: a recreation of an astonishing technical achievement and an object of not inconsiderable beauty. You’ll build more complex Technic sets, sure. But you won’t find many that you enjoy more than this.

If you’re considering buying some LEGO (like the McLaren!), then help Brick Fanatics by purchasing via one of our affiliate links – every brick helps!

How long does it take to build LEGO Technic 42141 McLaren Formula 1 Race Car?

With 11 bags of pieces and 66 stickers, it takes around seven to nine hours to complete 42141 McLaren Formula 1 Race Car, but it’s not a build to be rushed – take your time!

How many pieces are in LEGO Technic 42141 McLaren Formula 1 Race Car?

It takes a grand total of 1,432 pieces to put together LEGO Technic 42141 McLaren Formula 1 Race Car.

How much does LEGO Technic 42141 McLaren Formula 1 Race Car cost?