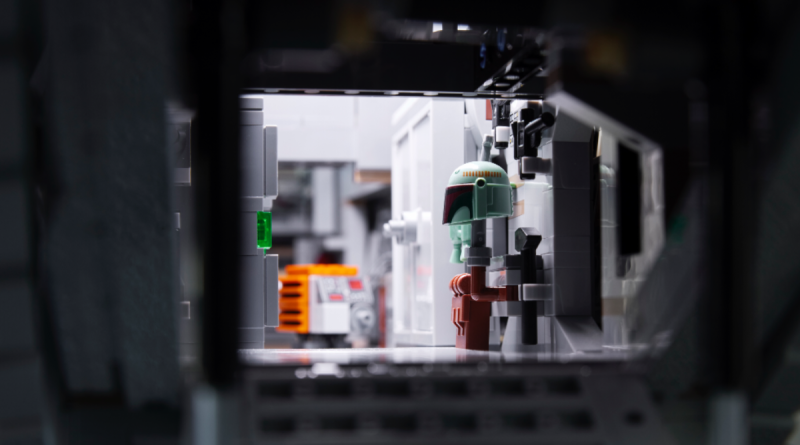 The LEGO Group is playing fast and loose with the colour of Boba Fett’s armour in a promo clip for 75331 The Razor Crest, and it’s nothing if not misleading.

When the LEGO Star Wars theme reintroduced the bounty hunter (as seen in The Mandalorian) in last summer’s 75312 Boba Fett’s Starship, it did so with severely mismatched armour. Boba had a new torso with dark green and black armour, accurately reflecting his appearance in the Disney+ TV show, but used the same old sand green helmet and jetpack from countless Fett minifigures before him.

It didn’t take LEGO Star Wars fans long to dream up what Boba Fett might look like with a dark green helmet and jetpack, and the results are impressive. Some hope remained, then, that the LEGO Group might make good on a more accurate version of the character for his own show, The Book of Boba Fett. That hope then dissipated with the arrival of 75326 Boba Fett’s Throne Room, which includes exactly the same minifigure.

Fast forward to today, and the LEGO Group has now unveiled the latest LEGO Star Wars set to include Boba Fett – or at least, his helmet and jetpack, which are stowed away aboard 75331 The Razor Crest. It’s a neat Easter egg, but also another missed opportunity to recolour them in dark green, because those pieces are once again sand green.

You wouldn’t know it if you were only looking at the company’s latest promo clip for the Ultimate Collector Series set, though, because – as pointed out by MandRproductions – it misleadingly portrays those elements in dark green, in direct contrast to the set’s official product and lifestyle images. You can see the difference in the images below.

It may be that the helmet and jetpack were once intended to be produced in dark green, but it’s almost beside the point at this stage: even if that was the case, they should still have been swapped for sand green before the video was published. In its current state, the promo clip could easily be construed as false advertising, and could lead to more than a few disappointed customers come October.

If nothing else, we’re back to hoping that the LEGO Star Wars theme might one day give us a more accurate post-Return of the Jedi Boba Fett minifigure – it just hasn’t happened courtesy of 75331 The Razor Crest. Not that it should anyway: Boba only repaints his armour dark green after retrieving it from Mando, so sand green is technically accurate here. Which only makes the promo even more confusing…