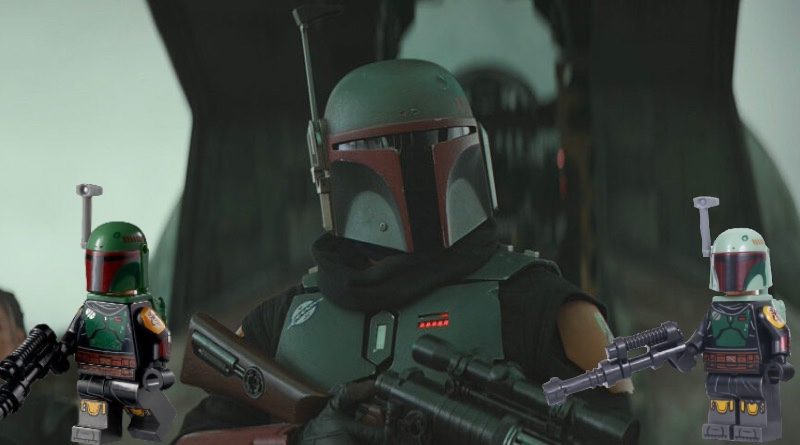 The new Boba Fett LEGO minifigure from Star Wars: The Mandalorian is a brilliant upgrade – but it looks even better with a helmet and jetpack that match the colours on the torso.

Launching on August 1 in 75312 Boba Fett’s Starship – a set that’s attracted controversy (and memes) for an entirely different reason – the aged bounty hunter features a new torso and legs reflective of his appearance in the second season of Star Wars: The Mandalorian.

While the printing across those new elements is incredibly authentic to how the character looked on-screen after reclaiming (and cleaning up) his armour, the LEGO Group has inexplicably stuck with the classic helmet and jetpack elements used for past Boba Fett minifigures – and they just don’t fit at all.

That’s partly because Boba’s reclaimed armour is indeed shinier and less battle-worn than it appears in the original trilogy, but mostly because the colours between the helmet/jetpack and torso don’t match. The torso printing uses dark green, while the helmet and jetpack have stuck resolutely to sand green.

With that in mind, it’s difficult not to imagine how much better the minifigure might have looked – and, let’s be clear, it’s already a great minifigure – if both those elements had been cast in dark green, with a brand new print for the helmet.

Fortunately, you don’t even need to imagine, because one fan has already whipped up a quick visualisation of those changes. The images below come from Jamie Crook, who published them to the LEGO Star Wars Fans Facebook page. Be warned, though: they may just ruin the new Boba Fett minifigure for you.

We can only hope the LEGO Group has something like this planned for any potential The Book of Boba Fett tie-in sets later this year (or in early 2022), because we just can’t unsee how much better this looks. Still, it won’t stop us grabbing 75312 Boba Fett’s Starship when it arrives on August 1, because we’re clearly just fiends for Fett.

Consider supporting the work that Brick Fanatics does by grabbing your own copy of 75312 Boba Fett’s Starship – and the rest of this summer’s The Mandalorian sets – using our affiliate links. Thank you!