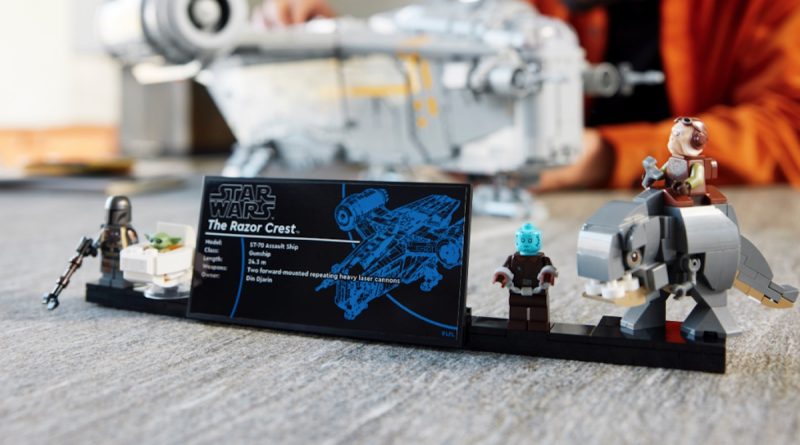 Finally revealed and clocking in at 6,187 pieces, the long-rumoured 75331 The Razor Crest certainly is a beast of an Ultimate Collector Series set. As well as its sheer size, the mighty LEGO Star Wars model also boasts removeable engines, a detailed cockpit, escape pod, carbon-freezing chamber and many more features.

As a welcome bonus, the latest 18+ UCS set also includes three all-new minifigures in the shape of The Mandalorian, Mythrol and Kuiil, plus a Grogu minifigure for fans to add to their collections. Although this isn’t the first time that an iteration of The Mandalorian has been released, the character does at least now boast an updated design.

A worried-looking Grogu can be placed into a more accurate white version of his hovering pram, compared to the red and grey model that appeared in 75307 Star Wars Advent Calendar. The Mandalorian himself receives an upgrade, with a new helmet design, plus updated grey arms that feature revised printing. At this stage we don’t yet know whether the head piece underneath the minifigure’s Beskar helmet is all-black or will feature Din Djarin’s face, first seen on the version of the character included with 75325 The Mandalorian’s N-1 Starfighter.

Fans and collectors looking to expand their collection of unique LEGO Star Wars characters based on those appearing in The Mandalorian will also finally be able to get their hands on the first-ever Mythrol and Kuiil minifigures. Having only previously appeared trapped in carbonite in 75292 The Razor Crest, the new Mythrol minifigure features a distinctive blue head piece and handcuff (or binder) accessory. Place the fugitive in the ship’s carbon-freezing chamber and he’ll be ready for transportation to the office of the Magistrate of Nevarro.

Making his debut in 75331 The Razor Crest, the Kuiil minifigure appears to be a fairly accurate depiction of the former vapor farmer encountered by The Mandalorian on Arvala-7. As well as his familiar brown helmet, goggles and backpack, the elderly Ugnaught can be placed on top of a brick-built Blurrg included in the UCS set, simulating the character riding the two-legged creature.