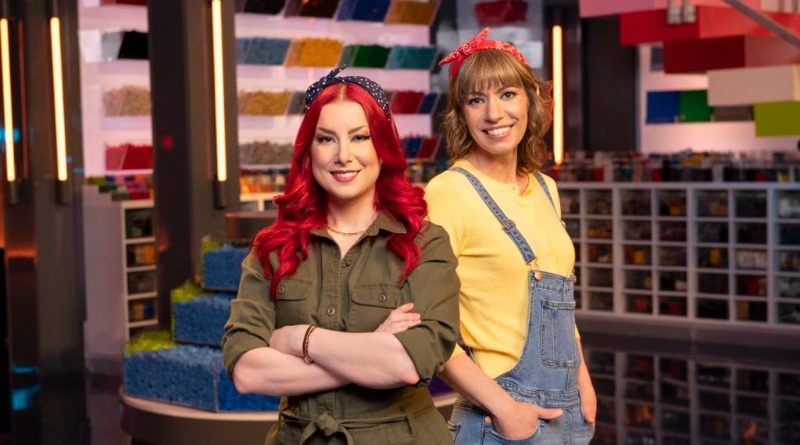 The first episode of LEGO MASTERS USA Season 2 airs on Tuesday, June 1 at 8pm ET / 9pm PT on FOX. The second season will once again see pairs of LEGO builders compete with one another in creative challenges, for the chance of winning a $100,000 cash prize, the ultimate LEGO trophy, and the grand title of LEGO MASTERS. Last year, we saw 20 contestants compete, but this year 24 LEGO fans will be taking to the stage.

We’ve already seen a quick breakdown of all 24 contestants but now we’ve had the chance to sit down with each of them. Let’s find out more about Natalie and Michelle.

Why did you apply to LEGO MASTERS?

Michelle: I’m a LEGO superfan and I’ve been building with my kids for a while. I just love LEGO and all my siblings and my family will tell you that, so when I saw it come up on Instagram, I knew I had to apply to this.

What got you into LEGO in the first place?

Natalie: It’s funny, Michelle and I have been friends for five years and we’ve done a bunch of DIY projects together. LEGO has been a new thing for us to build together, even though Michelle has been doing this a lot longer than me. So when Michelle called me and asked if I wanted to apply for LEGO MASTERS, I thought, ‘Sure, why not? We’ll never get a call, but why not?’

Then a few months later, she said, ‘You’re never going to believe this, they want to talk with us about it.’ I was super surprised. I’ve loved LEGO since I was a kid and I build with my kids, but this was a whole new level for me to dive into. I was really excited to meet the other contestants because I had seen some of their work before. This whole experience has been super cool and a really fun way for me to appreciate art and LEGO in a whole new way.

What set got you hooked on LEGO?

Natalie: For me, it wasn’t a set – I started with my kids, about five or six years ago, we bought a lot of sets for our kids and realised what kind of sets are out there. We bought a lot of Jurassic World stuff. I was so excited that all the sets were so much cooler than what I remembered. Then just doing stuff with my kids, that’s where most of my excitement comes from, seeing their excitement.

Michelle: I built as a kid and I build with my kids, so for me, it was intimidating going into LEGO MASTERS, because I’ve never been commissioned to build anything. There’s a lot of people who do this professionally. I build fun stuff with my kids. For me, my youngest is five, and I have a 13- and 12-year-old.

My five-year-old likes to build a lot of houses, and our minifigures are realtors and they show the other minifigures around the house and see which one they want to buy. She likes to do house renovations. Those have been my favourites. They’re not the most impressive builds you’ve ever seen, but they’re the ones we play with and have fun with.

What is the inspiration behind your builds?

Natalie: Usually my kids. That’s who I have always built with. Before the show, they would tell me stuff that they want to see built and that’s what I would do. When we were on the show, I think we both drew a lot of inspiration from our kids.

Michelle: Trying to tap into stories, instead of just making a scene. Is it something that’s telling a story? As humans, we connect with stories, like people sitting around campfires and telling stories. Even with LEGO, when you’re building stuff, even if it’s a fun, silly character, is there some way that you’re identifying with it?

What do you hope the audience takes away from your time on the show?

Natalie: My first thought was about what I hope they don’t think.

Michelle: I hope that they see our love of creating.

Natalie: I would add to that, even if you’re new, that you don’t need to know all the names of the parts to get creative and start doing things.