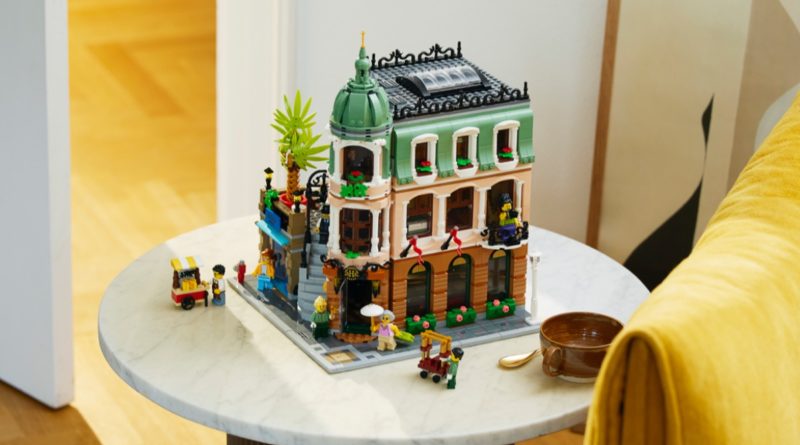 The LEGO Group has just lifted the lid on its latest modular building, but where does 10297 Boutique Hotel rank among the biggest modulars of all time?

Launching in January 2022 to celebrate the 15th anniversary of the LEGO for Adults (formerly Creator Expert) subtheme, 10297 Boutique Hotel combines a vibrant hotel – the first in the line since 10182 Café Corner – with an art gallery and rooftop terrace, complete with an oversized palm tree to carry on the tropical vibes of the main building’s colour scheme.

You can find out more about the newly-revealed set by clicking here, or head straight to our in-depth and detailed review of the newest LEGO for Adults set. For now, keep scrolling to see where its 3,066 bricks place it among the largest LEGO modular buildings of all time (by piece count).

It might be hard to believe from looking at it, but this comparatively diminutive modular building is actually the sixth-densest of them all in terms of part count. That’s probably partly down to all the tiny elements that make up the façade – there are a lot of 1×1 bricks on there – but it doesn’t take away from the fact that 10270 Bookshop is still among the largest modular buildings of all time.

A good chunk of the 2019 modular building’s pieces go into the truck that complements its workshop, which has undoubtedly helped to propel 10264 Corner Garage to its position on this list. If you want to see how those 2,569 elements come together for yourself but don’t yet own 10264 Corner Garage, best turn to the aftermarket soon: it’s sold out at LEGO.com, and will probably only rise in value from here.

For five long years, 10224 Town Hall was king of all the modular buildings, in both piece count and physical size. Towering high above the rest of the street – as any town hall should – the dark orange building remains a focal point of any modular building street it’s displayed in. It’s since been bested by three others in sheer part density, though.

2021’s modular building didn’t hold on to its silver medal in this list for long, as it’s already been usurped by 10297 Boutique Hotel. (Spoiler alert!) But as the first 32×32 modular building to surpass 10224 Town Hall in piece count, it still represents a real milestone for the Modular Buildings Collection, and potentially points to the beginnings of a slow creep in size for the subtheme.

Skirting past its immediate predecessor by just 143 bricks, the latest modular building – which arrives on shelves on January 1, 2022 – leaps straight into second place on this list. It’s actually a bit shorter than 10278 Police Station, but 10297 Boutique Hotel is no less impressive, combining an engaging build with an innovative and fresh final model. (Read our full review here.)

It’s probably going to be another five years before we see any modular building have a credible chance of toppling 10255 Assembly Square from its podium. Released to celebrate the 10th anniversary of the Modular Buildings Collection, the 4,002-piece set extends the traditional 32×32 footprint of the line to 48 studs wide, leading to a much higher piece count than its peers – but one that’s completely justified in its beautiful design, which calls back to almost all of its predecessors.

If you’ve got any cash left in the aftermath of all the Black Friday/Cyber Monday mayhem, you can catch up on the current crop of modular buildings ahead of 10297 Boutique Hotel’s launch over at LEGO.com.