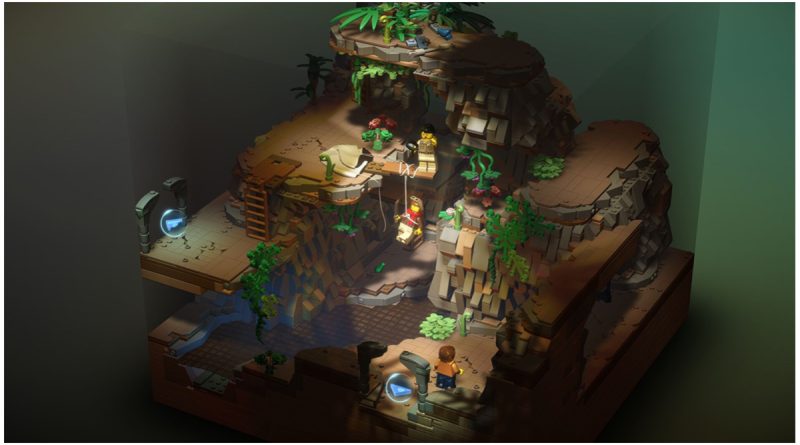 With some iffy controls but nary a licensed theme in sight, Bricktales is something of a rarity: a LEGO game about building.

Think about a LEGO video game, and chances are you’ll conjure up images of Star Wars, Harry Potter, Marvel, Star Wars, Lord of the Rings or… Star Wars.  There have been a lot of LEGO Star Wars video games. Older readers may recall LEGO Racers, Bionicle based games or LEGO Rock Raiders. If you were unlucky and Auntie Beryl had gone into a video game shop for the first and only time in her life in the run up to Christmas 2011, and asked for a LEGO video game for her niece or nephew, then maybe you were one of the three people who had a copy of Life of George.

These days, the licensed juggernauts from the likes of Travellers Tales make up the bulk of LEGO video gaming, and they all feel a bit like a generic game wrapped in a veneer of LEGO. Don’t get us wrong – a game like the recent LEGO Star Wars: The Skywalker Saga sold extraordinarily well because it’s a great game based on a great franchise. But building with LEGO bricks is just something that you do occasionally, rather than it being a core element.

Not so with Bricktales, which is released imminently on a variety of platforms. It’s built around solving problems, often physics based, and you’ll need your trusty bricks and a healthy dose of ingenuity to progress.

As early reviews start to appear online, we can get a feel for whether this is likely to appeal to gamers, or whether they’ll stick to what they know best. Certainly if vg247 is to be believed, then it’s the former, as according to them it’s ‘a near perfect video game representation of joyous LEGO creativity’. And that’s just the review title! In comparison to the high-speed, high-energy play of the themed games, where building is usually limited to ‘build object A or build object B’, this is ‘low key’ and thoughtful. You’ve got a problem and a bucket of bricks. How are you going to solve it?

A good analogy is that where most games are like building a set by reading the manual, this is the equivalent of a MOC. vg247 again: ‘The desire for aesthetic perfection in this blocky form is a constant companion – and when something clicks, the feeling is exhilarating. Lego Bricktales has that energy in spades. It’s wonderful.’

One potential fly in the ointment picked up by a couple of reviews, and that’s the issue of the controls. The tried and trusted mouse and keyboard combo of a PC isn’t great, while console fans may find, like xboxera, that ‘on controller, the configuration is serviceable at best, but absolutely frustrating at it’s worst.’

The game has replayability, thanks to areas that, initially locked out of reach, can be opened up as the game progresses. And you’ll be thankful to know that, as xboxera says, any extras that need to be purchased are ‘all earned ‘in game’ – there are no microtransactions to speak of.’

The level of challenge is not something that brings universally agreement. For some, once they’ve solved a puzzle, ‘I look at my works, I’m pleased… but then I go back. I tinker. I tweak.’ GamesRadar are less enthusiastic though: ‘The exploratory portion is a little tiresome, with slow, plodding movement and too much unnecessary back and forth navigation. And when the reward is just more bricks for the sandbox mode you probably won’t use, it hardly seems worth it.’

Such criticisms seem few and far between though. “Charming and relaxing’ seems to be the order of the day, while GamesRadar gives it possibly the greatest possible compliment, when it says that the game provides ‘a sense that you’re actually playing with Lego’. And it doesn’t get much better than that.

Help support Brick Fanatics by purchasing your LEGO via our affiliate links. Thank you.