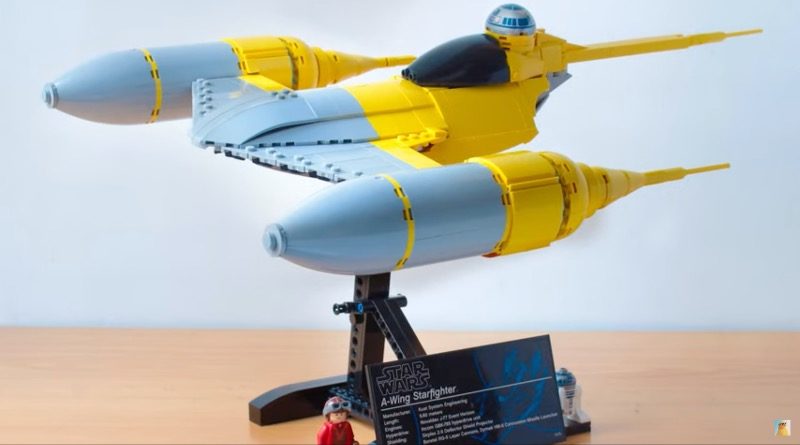 It’s been almost two decades since LEGO Star Wars 10026 Special Edition Naboo Starfighter landed on shelves – but what would a modern version look like today?

That’s the question answered by LEGO builder extraordinaire hachiroku24, who’s put together his own interpretation of the iconic yellow starfighter at the scale of other Ultimate Collector Series sets.

If you’re having trouble getting a sense of just how large the builder’s first-ever UCS-style model is, look to the R2-D2 dome perched near the back. That’s a recoloured version of the large R4-P17 head piece from 10215 Obi-Wan’s Jedi Starfighter, which covers a 4×4-stud footprint.

hachiroku24’s version of the N-1 swaps out the original 2002 set’s chrome elements for light grey, matching the LEGO Group’s many minifigure-scale versions of the ship. That’s understandable for two reasons: first, the pieces used don’t exist in chrome; and second, chroming them would be incredibly expensive. (That’s also the reason the LEGO Group has shied away from chrome elements in recent years.)

If you’d like to learn how to assemble hachiroku24’s UCS Naboo Starfighter for yourself, hit play on the video above, where you can watch it come together in real time in a very handy tutorial. The builder says it’s one of his favourite Star Wars ships, and he’s been slowly gathering the parts over the last few months. The final piece to the puzzle came from 76161 1989 Batwing, with a black half cone element used for the starfighter’s cockpit.

To see more of the YouTuber’s work, check out his current projects on LEGO Ideas. His first 10K effort, Portal 2 – GLaDOS vs Chell and Wheatley, was unfortunately rejected in the latest Ideas review, but he’s got three more on the go at the time of writing: LEGO Insects, Jaws – The Great Shark Chase Diorama, and Adventurers of the Secret Sphinx.