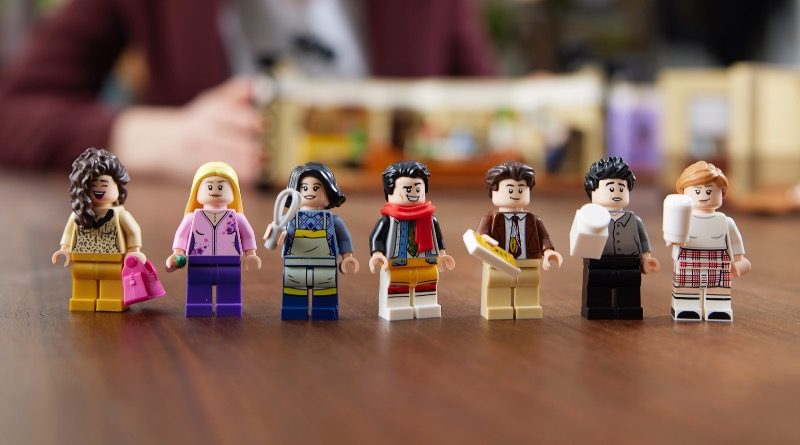 LEGO 10292 Friends Apartments includes seven brand new minifigures based on the classic TV sitcom – but which episodes served as the inspiration for each of its characters?

Just like 21319 Central Perk before it, 10292 Friends Apartments – the newly-revealed follow-up to the 2019 LEGO Ideas set – includes minifigures of all six members of the show’s main gang, plus one extra cast member. This time, Gunther is swapped out for the first ever LEGO representation of Janice Litman-Goralnik, the series’ third-most-recurring side character.

But where the minifigure designs in 21319 Central Perk all drew on the first season of the show, 10292 Friends Apartments’ colourful cast spans the series’ entire history, threading together multiple references across their torso and leg prints. If you’re having difficulty pinpointing the specific inspiration behind each of these minifigures, read on…

Given how plain Ross’s outfit appears in 10292 Friends Apartments, you’d be forgiven for not immediately recognising it – but it’s actually completely in line with his attire in The One With All The Resolutions (S5, E11), in which the gang all attempt to follow through on their New Year’s resolutions.

For Ross, that involves buying a pair of leather trousers, which predictably ends disastrously, a word which here means ‘standing in a bathroom covered in baby powder’ (thus explaining the minifigure’s white accessory). It’s a very simple outfit, requiring only plain black legs, but works as a specific nod to one of Ross’s more embarrassing moments in a show that’s obviously full of them.

While the rest of the minifigures in 10292 Friends Apartments largely leave behind their characters’ earliest outfits seen in 21319 Central Perk, Rachel instead brings us another Season 1 combo worn while working at the coffee shop.

Mixing a cropped turtleneck, plaid kilt and knee-length socks isn’t a look everyone could pull off, but Rachel certainly did – particularly given how much she got up to in this outfit, including babysitting (and subsequently losing) Ross’s pet monkey Marcel – and while it’s perhaps not as flattering in minifigure form, it makes great use of dual-moulded legs and intricate printing.

At the point in the show Monica’s minifigure design is derived from, we’re technically still a few episodes out from her marriage to Chandler, so Geller is very much the accurate surname here. Her sweater and apron are a direct reference to The One With All The Candy (S7, E9), in which Monica attempts to woo her neighbours by making… well, endless amounts of candy.

It’s a much more specific callback than is afforded to some of the other characters in 10292 Friends Apartments, and means Monica is one of just three minifigures in the set to enjoy the benefits of leg printing.

Less specific in his outfit choice is Chandler Bing, who’s sporting just one example of the myriad loud ties he wore in the show’s earliest seasons, along with the brown jacket he eventually tears on the oversized entertainment centre in The One With Frank Jr. (S3, E5).

Google was unsuccessful in returning an image of the specific source material for Chandler’s tie in 10292 Friends Apartments, but we did retrieve enough images of his ugly ties (including an entire blog dedicated to them that unfortunately never got going) to assume that the LEGO Group picked out a specific one for his latest minifigure.

Much easier to pinpoint is the storyline that served as inspiration for Joey Tribbiani’s minifigure in 10292 Friends Apartments, to the end that his is probably the first that caught your eye when seeing the set’s official images.

In The One Where No One’s Ready (S3, E2), an argument between Joey and Chandler escalates to the point that Chandler decides to hide all of his roommate’s underwear. Joey then retaliates by doing ‘the opposite’, which he interprets as wearing everything Chandler owns. That scene is brilliantly and authentically recreated in the prints across Joey’s torso and legs, topped off by a scarf that could perhaps have used a fresh print.

Dressed in what the LEGO Group refers to as a ‘classic floral look’, Phoebe Buffay’s new minifigure (which also gives her a fresh hairpiece) opts for a pink cardigan and plain purple legs. This specific outfit draws on The One Where Phoebe Runs (S6, E7), although it’s obviously not her running gear. Instead, Lisa Kudrow’s character wears it while attempting to record a new answering machine message with Rachel after the pair move in together. (Thanks to Megan Rainey on Twitter for the tip-off!)

It’s perhaps the least appealing minifigure of the bunch – especially given the far more iconic outfits Phoebe has worn over the years – but that really only speaks to how great the rest are.

Often glimpsed wearing a daring triple-leopard print combo in the show, recurring guest character Janice’s first ever LEGO minifigure opts for a more muted leopard print across just the torso, making do with plain legs instead of the also-patterned trousers she actually wears alongside that specific top.

It makes for a more appealing – but perhaps less authentic – minifigure than the totally ‘90s look Janice rocked in the series, and is cleverly complemented by a hairpiece originally designed for the Harry Potter theme’s Bellatrix Lestrange minifigure.

For more on 10292 Friends Apartments, check out the official announcement, along with a full gallery of images showcasing every specific reference and call-out spread throughout the set. Check back with Brick Fanatics later this week for our hands-on verdict.