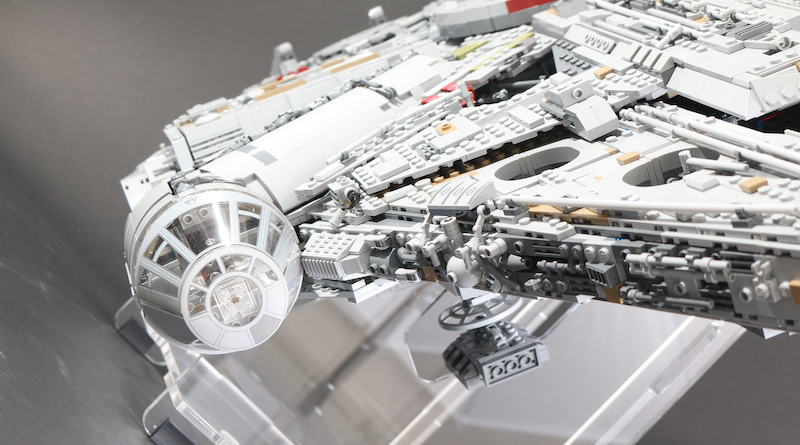 iDisplayit has released a ‘new and improved’ display stand for 75192 Millennium Falcon that Brick Fanatics Magazine readers can save 15% on, so how does it stack up?

Anyone lucky enough to own 75192 Millennium Falcon and to have then taken the next step and actually built it will no doubt be aware of the challenge that it presents, once constructed and after the LEGO madness has died down – just where in the house or office will it go on display? Measuring 84cm long and 56cm wide, it’s the size of a regular coffee table and, given its shape and design as a ship, it stands short, flat and wide. What looks fantastic in 7,500 pieces displays very awkwardly if a substantial amount of space cannot be found for it. 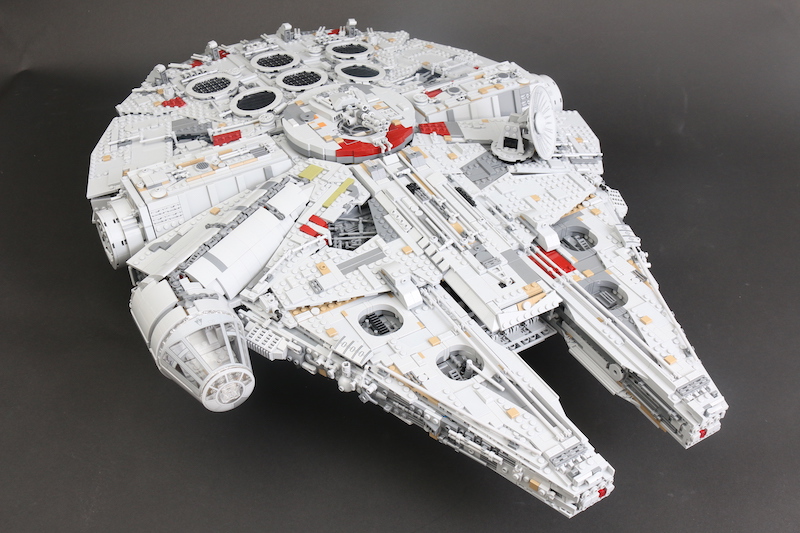 One solution to its demands for such space, besides clearing away the rest of your LEGO collection, downsizing the sofa, rehoming the dog or removing the fridge, is to actually just reduce the space that the Falcon takes up. And that’s where iDisplayit’s latest release comes in. As part of an advertising partnership with Brick Fanatics Magazine, which includes an exclusive 15% off discount code for readers to find in Issue 10 and use at www.iDisplayit.co.uk, the company have sent over a copy of ‘Mark 2’ of their 75192 Millennium Falcon display stand for review.

The stand is advertised as ‘new and improved’ on their first version and, as is the case with its predecessor, can display the Falcon in two very different angles, including a high upright one that vastly cuts down the space that the set requires when on display. Priced at £52.80 before applying the exclusive 15% discount readers of Brick Fanatics Magazine can enjoy by locating the specially created voucher code inside Issue 10, what do you get for your money, and, how effective is the stand in both function and display?

Just as how a display case from iDisplayit arrives, so too does a display stand – fully protected in several layers of bubble-wrap, underneath which the plastic has been secured to cardboard to keep it flat. With cellophane wrap on each plastic panel that makes up the stand too, every effort has been made to ensure that the product is protected in transit and, importantly for what is clear plastic all round, arrives with you scratch free.

There is some assembly required once you have unpacked the stand, with it arriving in four separate panels, alongside some simple instructions and a handful of screws. It’s a five-minute task to securely put together the stand, with the longest amount of that time actually spent trying to remove the cellophane wrap – befriend someone with long nails to save yourself a few minutes.

Once built, the stand is compact and rigid in structure, with four rubber supports provided for the feet, whichever way up you want it to hold the 75192 Millennium Falcon . 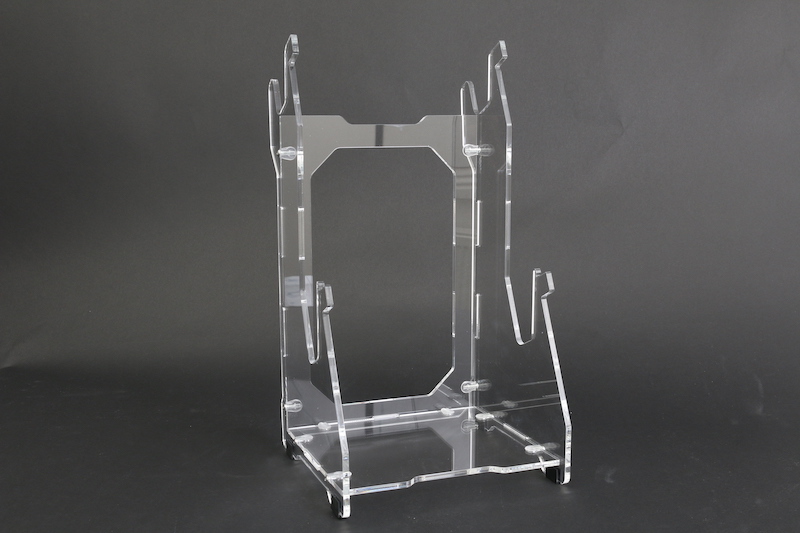 Putting the Falcon on the stand, either way up, requires great care, due to the LEGO set’s weight and design. The instructions provided recommend removing the loose panels on top and lifting from the central horizontal line of the Falcon’s body, but even in doing this, take care as there’s plenty of LEGO on this set just waiting to ping off.

The stand has been designed so that in either angle you choose to display the Falcon on, support is firm, with four raised parts to it created so as to slot into already available gaps in the underside of the LEGO set. It’s tricky first time to lift what is a hefty model on to the stand and locate those four slots, hence the recommendation that this is a two-person task. There’s even a video put together to show you the process.

In the upright position, the stand is exactly what you would hope for – firm and solid in both hold and support of the Millennium Falcon. Such is the weight-based connection, it is possible to move the stand and model in one go, even if this is not something we recommend. It’s your £650 set that’ll come crashing down if you get it wrong…

From most views of the model at the front, the stand is barely visible, whilst the angle it positions the Falcon at opens up a number of new places for it to be displayed, given that it takes up far less space than when otherwise placed on its feet. Aside from what works practically at this angle, the model takes on a new life and truly looks fantastic, caught in mid-air flight. 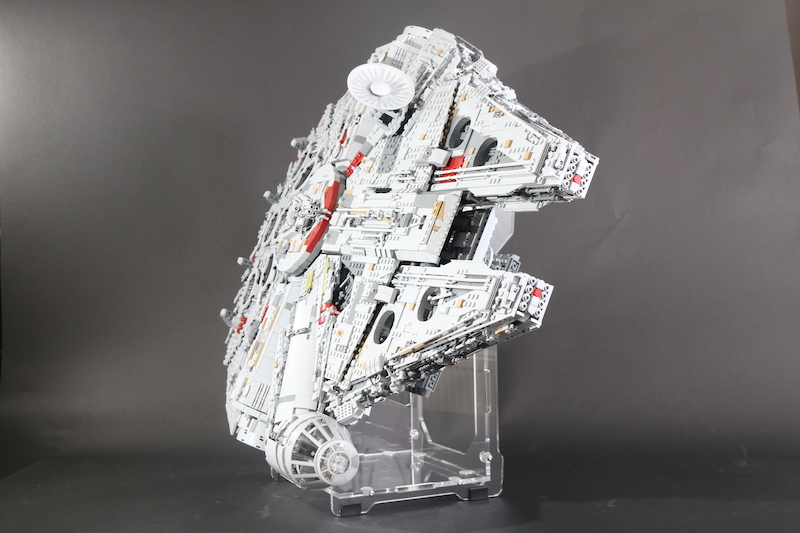 Where the upright angle saves space, the laid down position for the stand doesn’t much, but also has the effect of giving the set a more dynamic pose than just stood on its feet. Securing the Falcon into the stand in this position is also pretty tricky – if it’s just the one of you lifting (as is not recommended). Holding the Falcon as you fit it on to the stand at this angle will certainly put your core strength to the test. 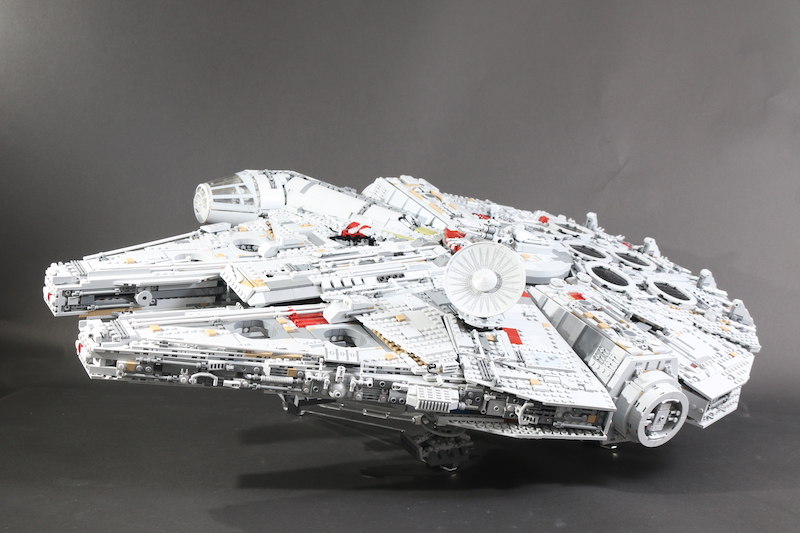 Overall, the display stand is at once solid and almost invisible, giving a stupidly oversized LEGO set a great deal of new and far more practical display options. From the way the product is packaged through to its assembly and the simplicity of its connection to the model, iDisplayit’s Mark 2 display stand for 75192 Millennium Falcon is an easy recommendation. It makes an awesome LEGO Star Wars set look even more awesome. 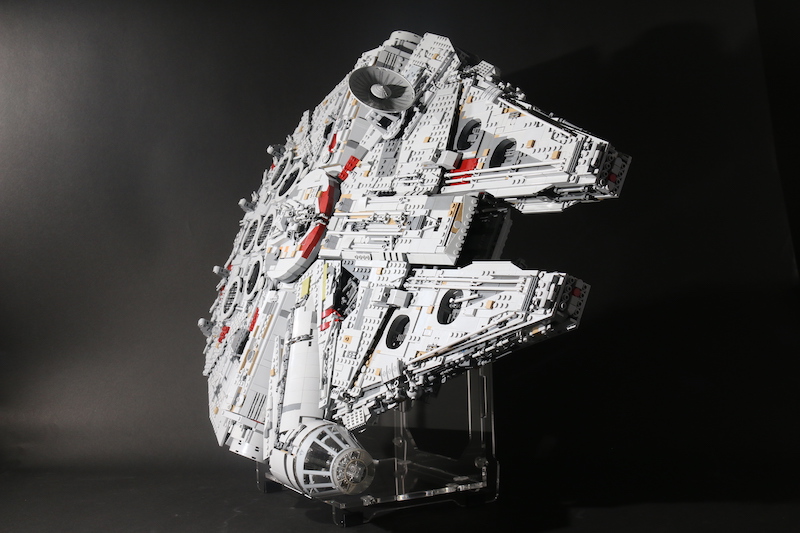