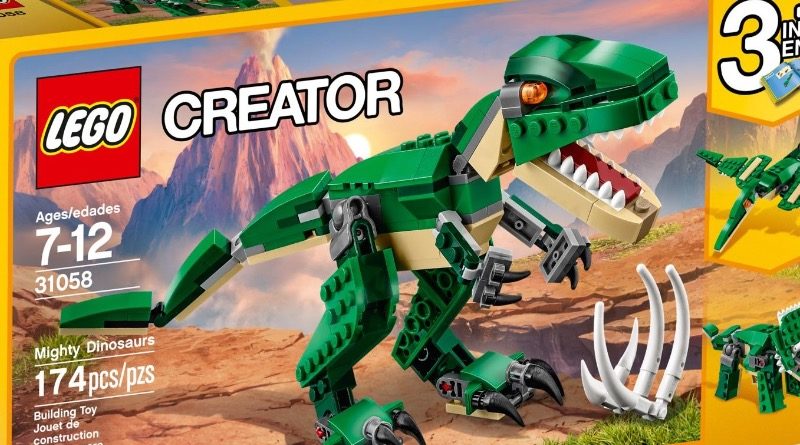 LEGO Creator 31058 Mighty Dinosaurs, a mainstay on shelves since 2017, is set to be reissued with a new product number – and in a brand new colour.

While the original 3-in-1 set casts the trio of dinos in green, 77941 Mighty Dinosaurs will reconfigure them in dark blue. From the initial image discovered by Promobricks in a document published on LEGO.com, everything else about the design looks identical to the original set – even down to the box art.

That’s with the sole exception of the product number, and the accompany recommended age range. While 31058 Mighty Dinosaurs is labelled ‘7-12’, the newer version will remove the cap with a straight ‘7+’.

This is an unusual move for the LEGO Group given 31058 Mighty Dinosaurs is still on shelves (and presumably selling well, as it’s been around for more than four and a half years). But news of the reissue comes in tandem with word of 77941 Fiat 500, a colour-swapped version of last year’s 10271 Fiat 500, suggesting a wider shift towards recoloured designs.

There’s no word yet on when 77941 Mighty Dinosaurs will arrive on shelves, but like 77941 Fiat 500, it’s already up on LEGO.com’s building instructions portal. Perhaps what will be most interesting about these sets is whether the LEGO Group chooses to sell two colourways concurrently, or simply replaces the previous versions with the updated products.