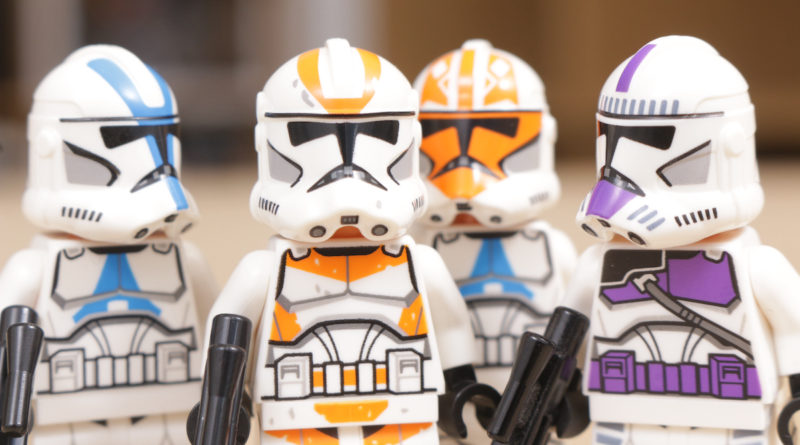 Commander Cody’s orange visor and antenna aren’t the only things that have changed on the new LEGO Star Wars Clone Trooper helmets – here’s how they compare to their contemporaries.

It’s fair to say that if you’re the type of person who likes to express your individuality, then a Clone Trooper in the Grand Army of the Republic would probably not have been the job for you. Because you, and every one of your 1.2 million coworkers, created in the clone factories of Kamino, bore a remarkable resemblance to a certain Jango Fett. And you all had a similar taste in clothes.

But free will is a hard thing to suppress, and over time, the various companies, legions and battalions began to decorate their armour to give them a look of their own. These personalisations have been reflected in the Clone Trooper minifigures that the LEGO Group has produced over the years. With each iteration, both the moulds and the printing of those minifigures have improved, although inevitably, with each change, someone’s not happy.

Here we take a closer look at the latest generation of helmets, first introduced in 75280 501st Legion Clone Troopers and now updated once again for 75337 AT-TE Walker.

The troops up for inspection are Mace Windu’s 187th Legion with their minimalist purple decoration; the new 212th Battalion, led by Obi-Wan Kenobi and everybody’s favourite Jedi-slaughtering trooper, Commander Cody, with their flame-orange decals; the 501st, later to become known by the catchy moniker ‘Vader’s Fist’, with blue highlights; and finally Ahsoka’s Clone Troopers, better known to the Republican payroll team as the 332nd Company. While their armour remains the blue of their parent Legion, the 501st, their helmets are a stylised version of Ahsoka Tano’s facial markings and skin tone.

There are, understandably, a number of similarities across the different helmets. Being modelled on Mandalorian armour, the grey print, outlined with black, that suggests the ‘sunken cheeks’ of the helmet is very similar across the various helmets. The black outline on the 501st helmet is rather more substantial than the neat pin-striping of the 187th and 212th, though whether this is intentional or a printing error is difficult to say.

The biggest difference is on the 332nd helmets, where the grey section is noticeably larger. It would be nice to think that this was a design choice to reflect the ‘hurried’ repainting that the 332nd carried out when the unit heard that Ahsoka Tano was returning. As Captain Rex put it: “The paint job’s a little crude, but we think it gets the idea across.”

The ‘T’-shaped visor and air vents that form the ‘mouth’ of the helmet seem to be identical on all helmets, as does the Vocoder Direct Speaker and Bliar Induction Filters that are on the chin, and the Dymak Exhaust Filters along the jawline. That said, while the Vocoder appears to have been printed perfectly on the 212th helmet, the remaining three all seem to have slight imperfections, as though the print didn’t meet the helmet straight on.

The rubber guard strip, or the black line across the brow of the helmet, shouldn’t be customisable, as it’s a fundamental design element of the helmet, but looking at the gap between the top of the visor and the guard strip, the 187th version definitely has a larger spacing than the other three. Looking at the line in relation to the moulding on the helmet though, they all seem to be in exactly the same place, which suggests that the visor print for the 187th is slightly lower.

While the individual unit markings are – obviously – all different, we can compare and contrast them. Each print is symmetrical and thanks to the ‘mohawk fin’ on the top of the helmet, we can see how accurately – or not – the print has been applied. The blue of the 501st seems to have drifted slightly to the right, looking at it face on. While it’s not so obvious on the top of the helmet, where the print stays either side of the fin, as it comes down the face, it’s noticeable that there is more blue print on one side of the nose of the visor than the other.

The 332nd, on the other hand, appears to be pretty much perfect. Given that this is a much larger print, covering much of the front, and a significant portion of the top of the helmet, it may be that there was less room for error. Whatever it is, this print is basically spot on.

The printing on the remaining two are much simpler and have also come out well. The simple strip on the fin, and block on the chin section of the 187th helmet, plus three vertical stripes on either side of the jaw seem to be centred perfectly.

As for the 212th, it has the simplest decoration of all, with a basic orange marking on the top of the helmet. This, in contrast to the 501st, seems to have drifted slightly to the left, but you have to be looking very closely to pick it up. Possibly due to having the simplest print, the 212th also gets some  battle damage, with some slight scarring on the right hand side of the helmet, just above the guard strip.

The biggest difference with the 212th is the hole on either side of the helmet, which allows the visor element or the antenna/range finder to be attached. It’s a subtle difference when viewed from straight ahead, but from the side, with no accessory attached, it sticks out like the proverbial sore thumb. These holes have been appearing on more and more helmets recently, so it’s likely that this will become the default design in the future.

Given that the helmet is not much bigger than the end of the average thumb, the LEGO Group is to be commended for creating such detailed prints on elements so small and – let’s not forget – oddly-shaped. It’s one thing to print on a tile, but another thing entirely to print on an element that has no flat surfaces to speak of.

Consider helping Brick Fanatics by purchasing your LEGO via our affiliate links. Thanks.