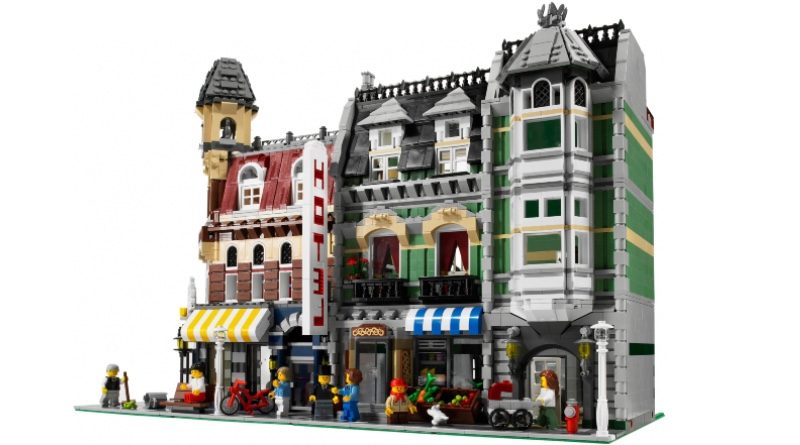 If rumours are true, this summer’s LEGO Ideas 21327 Typewriter could indirectly bring down the aftermarket price of 10185 Green Grocer.

Only the second-ever official entry into the Modular Buildings Collection (10190 Market Street was a fan-designed Factory spin-off set), 10185 Green Grocer originally retailed for £99.99 / $149.99 when it launched in March 2008. It hung around on shelves until the end of 2010, then retired from production and promptly shot up in price on the aftermarket.

Nowadays, a new, sealed copy commands in excess of £1,000 on BrickLink. Even the cheapest used copy – without box or instructions – currently has an eye-watering £561.15 asking price. But there’s a reason the set is so expensive, and why even buying its 2,352 parts individually on BrickLink won’t save you much money: two of its elements are incredibly rare.

We’re talking specifically about the 1×8 brick and the 1×2 brick with groove, both of which are included in vast quantities in sand green in 10185 Green Grocer. But the former has only appeared in a handful of other sets – and none since 2010’s 8097 Slave I, which included just four – while the latter popped up in just one other product, 2011’s 10217 Diagon Alley.

10185 Green Grocer includes 50 1×8 bricks and 56 1×2 bricks with groove, so it’s really no wonder it’s so expensive given their individual rarity. But that’s where – if rumours pan out – 21327 Typewriter may be able to completely disrupt the secondary market, and make a huge impact on the value of not only 10185 Green Grocer, but the parts that comprise the modular building.

According to Instagram user brick_clicker, Steve Guinness’s originally-grey typewriter proposal will actually be rendered in sand green for the official set. We’ve seen that colour in other models, of course – but bearing in mind the rumoured size of 21327 Typewriter, which is said to be a 2,078-piece, $200 set, it’s not difficult to imagine the build requiring at least a few 1×8 sand green bricks.

We’ll have to wait and see what comes of the 21327 Typewriter rumour to find out for sure, but here’s hoping the LEGO Group throws modular building collectors a bone and finally reintroduces those long-missed sand green elements to the market.