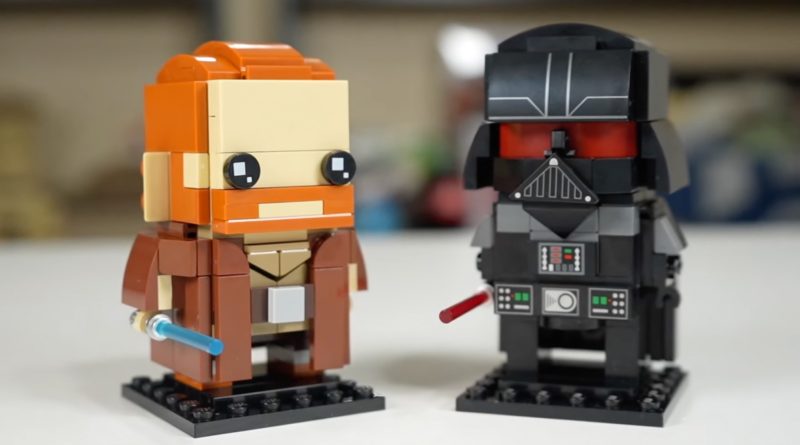 While most of us will have to wait another two months-and-change to get our hands on the pair of buildable statuettes – and one of two sets based on the Star Wars: Obi-Wan Kenobi limited series – 40547 Obi-Wan Kenobi & Darth Vader was available early at Star Wars Celebration over the weekend, complete with an exclusive wrap around its packaging.

The allocation of sets available across each day of the convention apparently sold out within hours, as collectors snapped up the early-access build and its ‘Got it here first!’ wrapper. Of course, plenty of those sets have now inevitably found their way on to eBay, which has allowed YouTuber MandRproductions to get hold of a copy for an early review.

Inside the box you’ll find two sets of bags – one per character, Obi-Wan Kenobi or Darth Vader – each with its own instruction manual. This isn’t our first BrickHeadz rendition of the Sith Lord (that honour goes to 41619 Darth Vader), but this version does switch things up with red lenses on his helmet, perhaps in a nod to the minifigure displayed on the artwork for 75336 Inquisitor Transport Scythe.

It’s our first Obi-Wan Kenobi in BrickHeadz style, though, and depicts the Jedi Master as he appears in his brand new series on Disney+. As Ryan points out, that robed aesthetic is not dissimilar to Kenobi’s appearance in the prequel trilogy, so you could easily repurpose it for an Attack of the Clones display, for example.

“If you’re into BrickHeadz even in the slightest, or you want something small and cheap to display on your desk that has something from the new Kenobi show, this is a really, really great option,” Ryan says. “These are nine out of 10 BrickHeadz for me.”