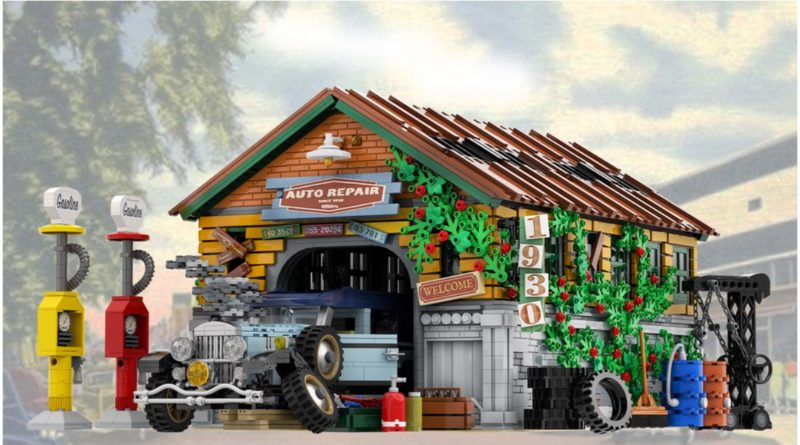 The 1930s Auto Repair Garage, complete with vintage car, joins the list of sets going into the second LEGO Ideas review of 2022.

Auto Repair Garage 1930s, a model of an ivy-covered, slightly tumbledown car repair shop has just passed the magic 10,000 supporters mark, meaning it will be joining the likes of Indiana Jones and Lilo & Stitch in the next LEGO Ideas review process.

The set, designed by legoceo, is their first LEGO Ideas submission and features a removable roof and opening windows, giving access to a detailed interior. The garage recalls early 20th century America, with steam pipes, a wooden clock on the wall and an old transistor radio. Accessories include gasoline pumps (or petrol, for anglophiles) a workbench with tools and a detailed engine crane.

There’s also room for an era-appropriate car, in light blue, with opening doors and a detachable roof. The car is clearly in need of assistance, as it has brick-built smoke emanating from the engine.

The Auto Repair Garage 1930s joins a growing list of sets for consideration in the next round of the LEGO Ideas review which so far includes:

The slightly ramshackle appearance is clearly popular with LEGO Ideas fans, with past sets making it to production including 21325 Medieval Blacksmith and 21310 Old Fishing Store, both of which are buildings clearly in need of some TLC.

You can help Brick Fanatics stay ship-shape by purchasing your LEGO via our affiliate links. Thanks very much.