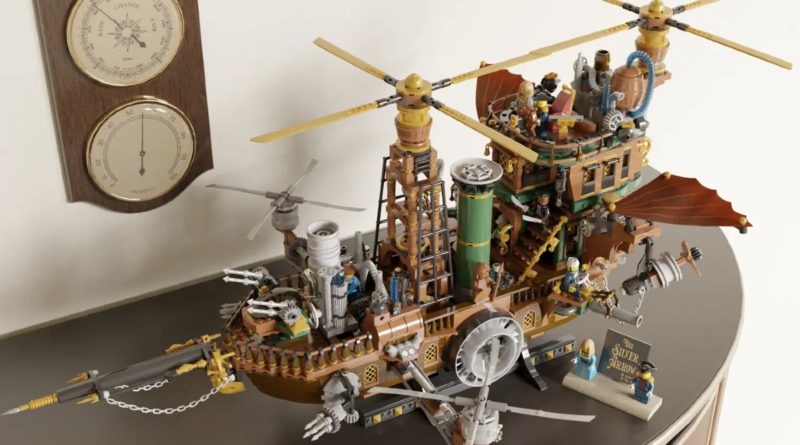 Take to the skies as another Steampunk project is in a LEGO Ideas review – a skyship featuring motorised elements and a modular structure.

Made in collaboration with Max Brich, the Motorized Steampunk Skyship from Castor-Troy is their fourth project in a row to reach 10,000 supporters. None have been approved yet, but they currently have a build in the review process. It uses 2,900 pieces to construct the skyship with seven minifigures. A display stand is also suggested as included, though the ship can be detached from it.

A small interior is included in the model featuring a sitting room. However, much of the space has gone towards the motorised aspect of the skyship.

A provided video details just how much of the ship is motorised, with the mechanism and motor integrated into or stored inside the main model.

This is the third project in the second 2022 review stage, which also includes models based on Indiana Jones and Lilo & Stitch:

It’s also far from the first Steampunk build on LEGO Ideas as another airborne vessel has been featured in a review twice before, a steampunk building reached 10,000 supporters in 2021 and more recently, a project with a similar design and concept inspired by Jules Verne passed into the first 2022 review.