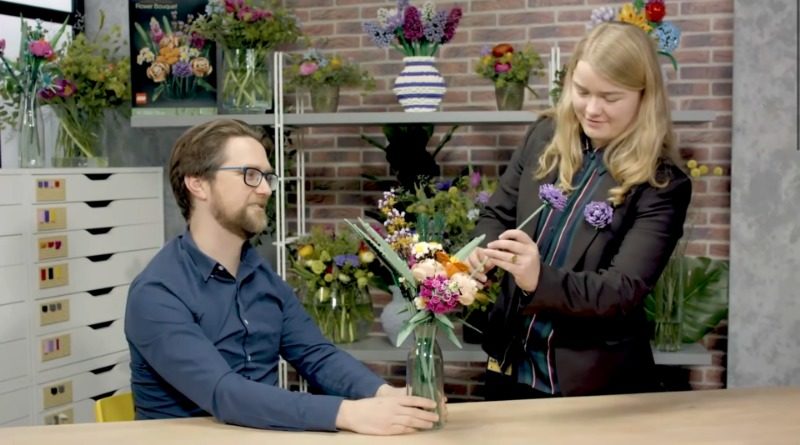 The designer of LEGO Botanical Collection 10280 Flower Bouquet reveals how the team decided which varieties of flowers to include in the final set, and how they’re hoping to use it to reach new fans.

The LEGO Group’s recent embrace of its growing adult fan community – heralded by the introduction of the 18+ label and its distinct (if divisive) black box packaging – has resulted in a swathe of products outside the parameters of its traditional portfolio, the latest of which is its brand new Botanical Collection.

Consisting of two sets so far, 10280 Flower Bouquet and 10281 Bonsai Tree, this new group of models feels incredibly individual within the wider LEGO line-up, insofar as you’re building something that’s purely for display (you definitely can’t play with flowers), and in a form very rarely visited by the LEGO Group before.

To find out more about how the Botanical Collection came together, Brick Fanatics joined a roundtable interview with LEGO designer Anderson Grubb, who spoke to select LEGO Fan Media about his process with 10280 Flower Bouquet – including how he and the team settled on the final selection of buildable flowers included in the set, and how they’re hoping to use it to reach a whole new demographic of LEGO fans.

That arrangement consists of various quantities of six different types of flower: a rose, snapdragon, Lavender, Aster, common daisy and California poppy. It took the design team quite a while to arrive at that selection, though – in terms of both the species chosen, and their respective colours.

“By the end of the project, my desk looked like a florist’s workshop,” Anderson says. “I had most varieties of the flowers you see in the bouquet in five or six different shades mocked up. I spent a lot of time going back and forth with a number of different people with different preferences about flowers, working out the arrangement.”

Given the LEGO Group’s global audience, making sure the flowers were recognisable all over the world was understandably an important part of that decision process.

“It definitely was a starting point,” Anderson tells Brick Fanatics. “The most obvious one is the rose. That was a build that once we had it, we knew it was working pretty well: people recognised it and we knew it would be known by a worldwide audience. That was one that was instantly in. Beyond that, I actually had quite a lot of freedom to explore different types of flowers. But definitely having at least a couple icons in there, particularly the roses, was important to us.”

And yet, despite that initial focus on recognisable flowers, Anderson and his team also spent a lot of time figuring out how the colours could actually subvert fans’ expectations, in step with a set that diverges so heavily from the LEGO Group’s traditional portfolio.

“We wanted this to have a colour palette that showcased what subtlety could be achieved,” Anderson explains. “That’s not a word you hear used in conjunction with LEGO bricks very often. But could we do it? Can we surprise people with subtlety and maturity, but also keeping a bright tone to it that would feel comfortable having on display in your home or your office for a long period of time? Lots of bouquets that you might find in a florist to give to somebody tend to be very bright, poppy colours that are sort of obvious. But we didn’t want this to be obvious. We wanted it to be surprising.”

Take a look at the colours used in the final bouquet, and it’s clear where those intentions have bled through in the set that’s now on shelves – perhaps most obviously in the roses, which are recreated in light nougat, a colour seldom seen outside its primary purpose as minifigure heads and hands.

“We have this beautiful, soft peach colour, and we’ve barely used it,” Anderson reflects. “We’ve certainly never used it like this. What a surprise for people, [that] will be unexpected both to fans and people new to LEGO building, who may have had no clue that was even in the palette. They might even be surprised that LEGO elements can do this. So, when that came about, that became a key point of, ‘this will get people talking’.”

The colours you can see in 10280 Flower Bouquet weren’t always set in stone, though – and some of the alternatives considered leaned further away from that subtlety and into the brighter palette that the LEGO Group is best known for, and which you can clearly see the preference for in the difference between 21325 Medieval Blacksmith and Clemens Fiedler’s original, muted design.

“Before we landed on this arrangement, I actually had three or four different, very distinct arrangements on my desk: one that was a lot brighter, [with] a lot more of the stronger LEGO colours; and one that was in some ways even more subtle and toned back than this one,” Anderson explains. “Ultimately, it came down to a combination of the team’s thoughts on what worked best, what we would want to see in our homes on display for a long period of time, [and] what had the broadest appeal.

“Then for individual flowers there are constraints on the colours and things like that. We prioritised the flowers that really would surprise people versus something like the daisies, for instance, which were very straightforward and actually worked in existing colours. Beyond that, I would just take a flower out, and put another flower back in in slightly different colours to see what happens. There was a lot of experimentation.”

Those constraints also speak to the accuracy Anderson and the team were aiming for – something that was born out in the earliest days of the project, when LEGO designer Carl Merriam was busy working on the very first sketch models. During that initial development process, Carl went straight to the source to learn more about the plants he was recreating in bricks.

“He went with some members of our team to one of the local florists here [in Billund],” Anderson tells Brick Fanatics. “I believe they bought a few bouquets and had them around for inspiration. So that was definitely – at least at the beginning – a source of inspiration, and looking at what works in an arrangement.”

The end goal of the Botanical Collection, of course – as with the LEGO Group’s wider ‘adults welcome’ strategy – is to not only cater to existing adult fans of LEGO, but to bring new fans into the fold, regardless of their personal history (or lack thereof) with the brand.

“It’s for anybody who loves flowers, who loves crafting, [or] who – like me – maybe doesn’t have the best green thumb, or also like me, has allergies,” Anderson says. “We knew this set was going to be quite popular across lots of demographics, and really hope it actually reaches people who might otherwise view LEGO bricks just as a toy, and start to help convince them that LEGO is more than a toy.”

10280 Flower Bouquet is available now at LEGO.com (unless it’s temporarily out of stock in your region – in which case, sign up to our stock alerts to be the first to know when it comes back). You can read our review of the set here. Stay tuned for more from Anderson, including how the team got special permission to recolour a Technic element, and why the roses aren’t red.