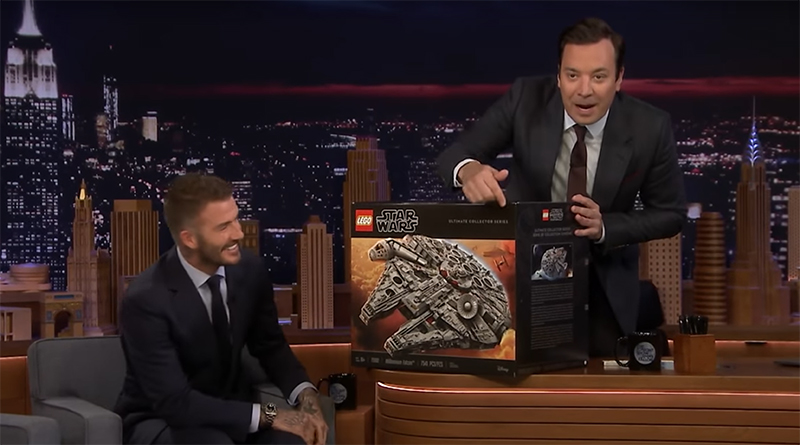 In an interview with Jimmy Fallon, David Beckham has spoken about his love for LEGO before being presented with Star Wars 75192 Millennium Falcon.

Celebrity LEGO fan David Beckham appeared on Tonight with Jimmy Fallon and the host asked him about his brick-based hobby. “I do love LEGO,” the former footballer confirmed. Fallon ended the segment by presented him with the largest set ever released, LEGO Star Wars 75192 Millennium Falcon.

Fallon also brought up Beckham’s wife, Victoria, and the Instagram posts she has shared mocking her husband’s endless building.

“It’s before I had kids, I grew up making LEGO when I was eight or nine years old,” Beckham explained. “Actually I continue it and Victoria always laughs at me, she’ll come down at like two o’clock in the morning and I’ll be trying to finish a piece off. She posted something the other day and I think she said because it was like 11 years and above, she was like, ‘Really? You are still up at two o’clock in the morning doing 11 years and above LEGO?’”

Despite the teasing he receives from his spouse, the famous fan explained: “It calms me when I am making it.”