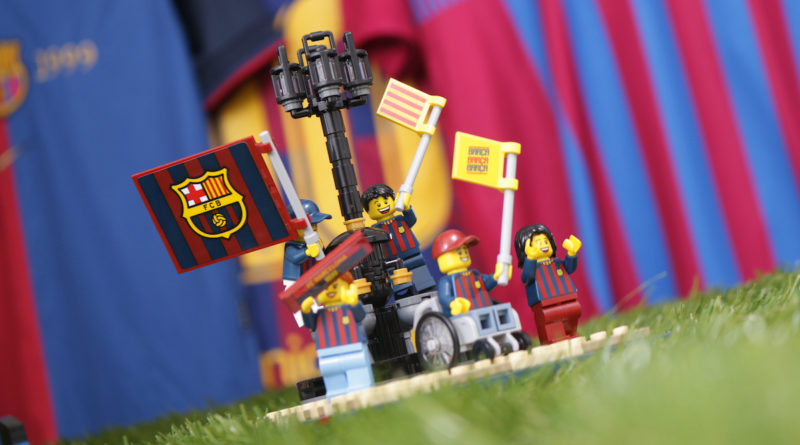 The LEGO Group and FC Barcelona collaborate for a highly desirable and very collectible gift-with-purchase in the form of 40485 FC Barcelona Celebration.

Available from September 1 to 12 – or more realistically while stocks last – 40485 FC Barcelona Celebration is a LEGO for Adults 18+ gift-with-purchase for VIPs who buy the direct-to-consumer exclusive 10284 Camp Nou – FC Barcelona from LEGO.com or LEGO stores. Given how long the Manchester United GWP to tie in with 10272 Old Trafford – Manchester United lasted (less than a day?), don’t expect 40485 to hang around for the duration of its runtime.

Beyond the stock issues the LEGO Group continues to have with gift-with-purchase items, the reason we expect 40485 FC Barcelona Celebration to sell out so quickly is simply for how good it is.

That’s even while acknowledging that at 178 bricks, it doesn’t have the highest piece count for a gift-with-purchase, nor certainly one that – on face value at least – would justify such a high spend threshold to pick it up. That it is exclusively tied to VIP purchases of 10284 Camp Nou – FC Barcelona is its saving grace (read our review of that set here), though, as it serves for anyone picking up that behemoth of a brick stadium as the perfect complement.

And that is for two reasons. First and foremost, it is because within those 178 pieces come five fantastic, fully-licensed Barcelona minifigures, each complete with a Barca home shirt template design for the torso. It’s a design that is both simple and interchangeable – you can easily swap out the heads, hands and legs to create half an outfield of Barcelona players should you so wish (and that’s probably what a lot of us will end up doing).

We criticise the LEGO Group for sometimes misjudging how fans may want to interact with a LEGO set, but in this instance, including five highly-desirable minifigures – that for the target audience will immediately strike a particular chord – is to its credit. Pick up two of these and you have the makings of a Barcelona football team in LEGO form. For the licensing issues that surround working with football teams in any capacity, that’s quite something to have on offer for LEGO fans.

Alongside the minifigure design and number that are included, the other reason for the brilliance of 40485 FC Barcelona Celebration is in how it specifically captures a particular Catalan landmark that is tied to fan ritual. The LEGO set is based on the Font de Canaletes (Canaletas Fountain), an ornate fountain that is crowned by a lamppost and known for two traditions – the belief that those who drink from it will return to the city and, more pertinently here, where Barcelona fans gather to celebrate the club’s victories.

Many images of Culés (as Barca fans are known) through the years marking famous triumphs in the club’s history feature this landmark.

The LEGO model is a more-than-credible recreation, too, built to fairly-accurate scale and detail, with enough of a baseplate around it to allow all your Barcelona minifigures to freely celebrate. The collection of stickered flags and scarves that also come in the set add a further level of authenticity to the overall scene – even if perhaps using an actual scarf piece rather than a 1×4 tile would have been better.

Offering a flexible and well-designed minifigure torso in decent number and a fitting recreation of a famous landmark tied to FC Barcelona’s history, 40485 FC Barcelona Celebration is a must-have gift-with-purchase for anyone already interested in picking up 10284 Camp Nou – FC Barcelona. As an add-on to that gigantic stadium build, it adds flavour and authenticity, as well as a set of minifigures we really weren’t expecting to ever see in official LEGO form.

LEGO for Adults 40485 FC Barcelona Celebration is available as a gift-with-purchase at LEGO.com and in LEGO stores from September 1 to 12 (while stocks last) for VIP members purchasing 10284 Camp Nou – FC Barcelona.

Support the work that Brick Fanatics does (and presumably Barcelona’s search for a way out of their financial crisis) by purchasing your Barcelona LEGO sets through one of our affiliate links.